In recent decades, a great deal of attention has focused on the EU’s attempts to exert influence on the global stage, but one area which has received relatively little attention is the issue of so called ‘science diplomacy’. Alea López de San Román and Simon Schunz provide a detailed overview of what science diplomacy entails, and how the EU is increasingly embracing the concept in its approach to external relations.

Science is an inherently borderless activity and international cooperation between scientists has existed for a long time. Although the active participation of governmental actors in the promotion of international science cooperation may be more recent, it has clearly been on the rise over the past decades. A number of countries (Germany, Japan, the United States) alongside international and supranational bodies like the European Union (EU) have become strongly interested in the science-foreign policy nexus. This has led to the rapid popularisation of a novel practice: science diplomacy.

The increasing popularity of science diplomacy stands in contrast to the only nascent attention it has attracted within the discipline of International Relations. Moreover, although an oft-cited definition of science diplomacy by the Royal Society and the American Academy for the Advancement of Science does exist – distinguishing between “science in diplomacy” (foreign policy objectives being informed by science), “diplomacy for science” (diplomatic activities facilitating science cooperation) and “science for diplomacy” (science cooperation ameliorating international relations) – the concept continues to suffer from a lack of clarity.

One of the international actors investing heavily into the development of a science diplomacy is the European Union. In a recent study, we strive to contribute to a better understanding of this novel domain of EU external action, asking how and why the Union is extending its activities in this area.

To grasp the rationale behind the development of EU science diplomacy, we first examined the self-perceptions that EU policy-makers have about the Union’s roles in this policy domain. Employing an analytical framework based on Holsti’s role theory, we engaged in a discourse analysis to extract major “role conceptions”, that is, the self-ascribed roles that the EU expresses to be playing internationally through its science diplomacy. Our analysis yielded nine such role conceptions: competitor; contributor to EU policies, objectives and interests; contributor to peace, prosperity, stability and security; developer; international collaborator for scientific or other purposes; knowledge-based actor; mediator-integrator; partner in mutually beneficial co-operation; partner in tackling global challenges.

To better understand the motivations for these role conceptions, we then linked these findings to the controversy about what type of power the EU is in world affairs. Two main motives are usually identified for why an actor engages in science diplomacy: (i) science may be integrated into foreign policy to facilitate co-operation with third parties around shared values, and (ii) an actor’s science-related activities may be extended beyond (national) boundaries to pursue interests in the global competition for knowledge and talents.

We found these motives to echo the popular “EU-as-power” debate, where Manners’ concept of “Normative Power Europe” depicts the EU as a fundamentally value-driven international actor, whereas Damro’s “Market Power Europe” perceives the EU as a large regulated market pursuing its interests by wanting third countries to adhere to levels of regulation similar to its own. Our analysis of EU science diplomacy was thus also intended to shed light on the relevance of these depictions of the EU and how they may interact.

When classifying the nine role conceptions according to whether they correspond to the notion of ‘Normative Power Europe’ or ‘Market Power Europe’, we arrived at the taxonomy of forms of EU science diplomacy depicted in the figure below. A probe into the EU’s current science diplomacy activities largely validated our findings. 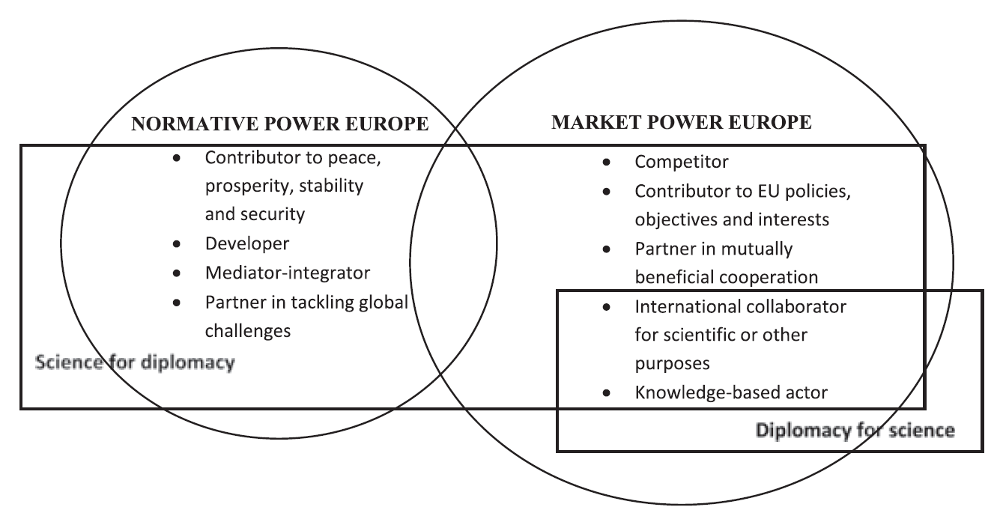 With this categorisation, we hope to disentangle the complex landscape of EU science diplomacy, providing greater conceptual clarity on what the EU wishes to achieve in this domain. Although references to Market Power Europe-related role conceptions are predominant in EU discourses, combining both interest and value-related motives – and thus its Market and Normative Power – seems to actually enhance the chances of successfully expanding its science diplomacy.

It enlarges the supporter base, as each form of EU science diplomacy appeals to a different constituency: traditionalists interested in promoting EU science internationally support the reinvigorated classical science and technology narrative of diplomacy for science; another group of actors interested in strategically exploiting the economic potential of EU science and technology at a global scale prefers the framing of science for diplomacy following a Market Power Europe logic; and yet another group – comprising the European External Action Service – wishes to employ science for developmental or peace-building purposes and thus finds itself in the Normative Power Europe-based science for diplomacy.

Whether the described three forms of EU science diplomacy will continue to co-exist, or whether one of them will come to predominate, is an exciting question whose answer will determine the future of EU external action in the science domain.

Simon Schunz – College of Europe
Simon Schunz is a Professor in the EU International Relations and Diplomacy Studies Department, and an Academic Coordinator of the Master of Arts in Transatlantic Affairs (MATA) at the College of Europe. He is also a Research Fellow at the United Nations University Institute on Comparative Regional Integration Studies (UNU-CRIS).

The EU’s Nobel Prize means that it must do even more to overcome its current crises, and increase its role as a force for peace and prosperity.