The German federal elections scheduled for 24 September are widely expected to produce another victory for Angela Merkel’s CDU/CSU. As Fabian G. Neuner and Christopher Wratil highlight, however, Merkel’s dominant position in the polling has potentially masked some interesting developments during the campaign. Chief among these is that there has been a rise in populist sentiment in Germany, which is fuelling support for the right-wing Alternative for Germany (AfD) and damaging the CDU/CSU more than any other party.

As Germany goes to the polls this Sunday, the election has been widely decried as a “boring” contest with Angela Merkel perceived as virtually certain to win her fourth successive chancellorship since 2005. What this popular view misses, however, is that despite the continued dominance of the CDU/CSU, the German party system is experiencing a profound transformation. According to recent polls and forecasting models, the populist Alternative for Germany (AfD) is set to enter the Bundestag with about 9-12% of the popular vote. Together with the Left party (Die Linke) that established itself as the successor of the Socialist Unity Party after 1989, two populist parties – one with a left-wing and one with a right-wing ideology – are slated to be represented in the German parliament, together accounting for about a fifth or even a quarter of all seats.

To understand this transformation, we conducted one of the first studies of the influence of populist attitudes on voting behaviour in Germany in a joint project with the Bertelsmann Stiftung (see recent report here) based on a representative panel survey of eligible voters between 2015 and 2017. In particular, we aimed to ascertain how different political positions and priorities may have differential impacts on populist versus non-populist voters. For this purpose, we recently fielded a survey experiment, in which respondents had to rate hypothetical political candidates running in their district in the 2017 election. Candidates randomly varied in their political positions on the refugee crisis, the future of the European Union, redistribution (taxes), and trade and globalisation. Candidates also promoted two out of thirteen randomly drawn political priorities, ranging from classical calls to “strengthen social justice” and “promote economic growth” to populist priorities such as “overthrowing the political elite” or “strengthening direct democracy”.

The results in Figure 1 present Average Marginal Component Effects (AMCE) for our two sub-groups: non-populists and populists. We determine these groups based on respondents’ answers to an eight item populist attitudes battery, which measures support for populism as an ideology pitting the ‘corrupt political elite’ against the ‘pure people’ without any right-wing or left-wing connotations. For each attribute, the estimate shows the change in probability that a candidate will be preferred if said candidate were to adopt a given position when compared to the baseline position.

Figure 1: Effects of political positions and priorities on candidate support 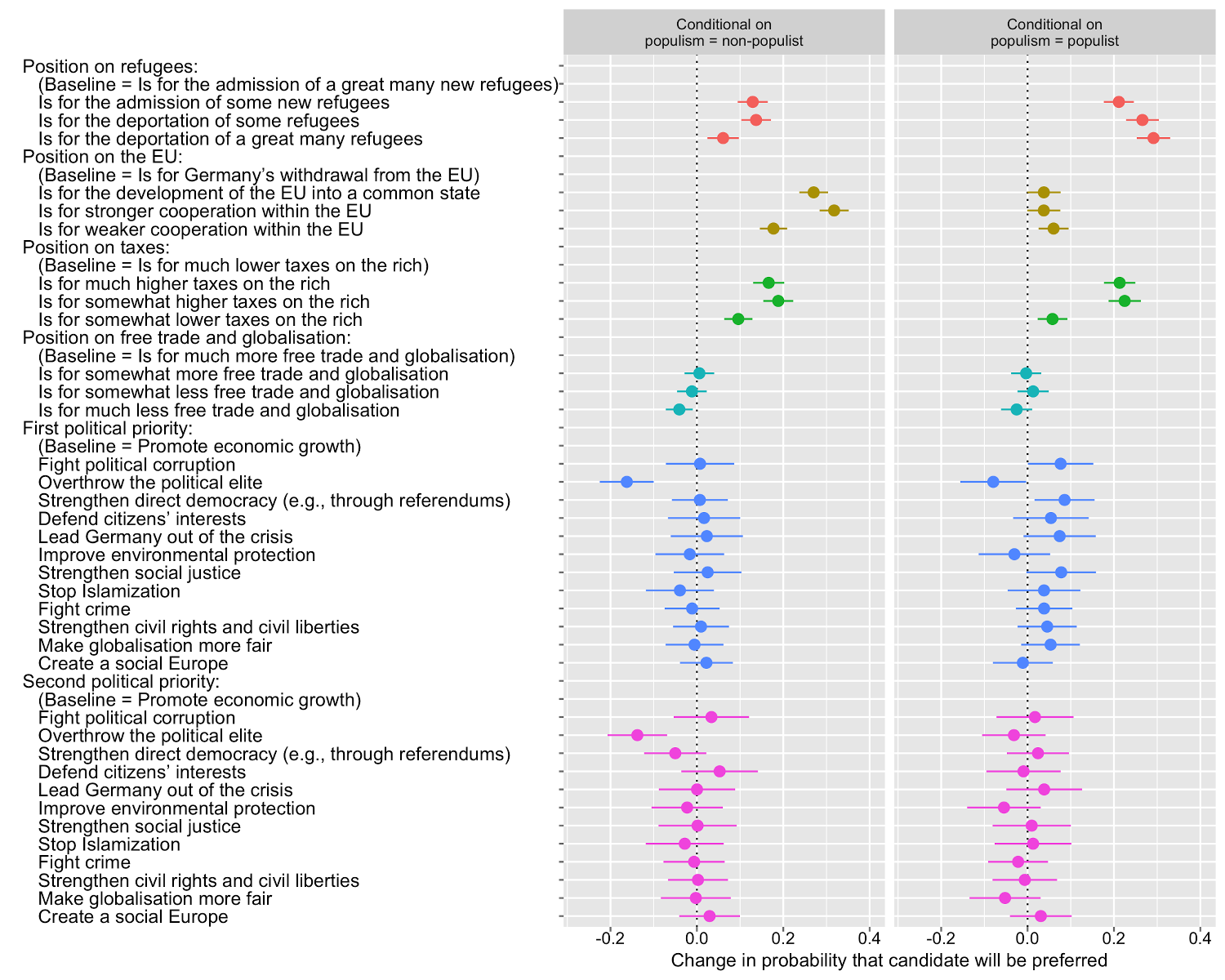 At first glance, the figure reveals that the key issues affecting vote choice differ between the two groups of voters. Most prominently, the treatment of refugees is much more important for populist voters. While admitting many more refugees is apparently a losing issue among all voters, positions in favour of deporting refugees increase candidate support by up to 29 percentage points among populist voters (from the baseline of admitting many more refugees). In contrast, non-populist voters are most supportive of candidates advocating the admission or deportation of only some refugees, but the effect of these positions is at most 14 percentage points.

In contrast, candidates’ positions on how the EU should be developed strongly move non-populist but not populist voters. While stronger EU cooperation markedly mobilises those who do not hold populist attitudes, populist voters are swayed neither by pro-EU nor anti-EU positions. Even more interestingly, positions on free trade and globalisation do not seem to move either type of voters much.

These findings thus run counter to widespread arguments that populist parties and politicians are able to mobilise voters with populist attitudes due to their anti-EU and anti-globalisation rhetoric. While such arguments may apply in different contexts, at least in the German case, we find that globalisation is a non-issue and EU integration an issue that garners support among mainstream voters but not populists.

In addition to issue positions, we also varied the political priorities associated with each candidate. The overarching take-away here is that changes in political priorities had little influence on candidate choice, especially when compared to the three major issues discussed above. The first five priorities are supposed to mimic populist talking points and allow us to test whether adopting populist themes is a winning strategy compared to more traditional political priorities. Somewhat surprisingly perhaps, there is only a small amount of movement induced by these priorities. Perhaps the most interesting exception is the populist call to overthrow the political elite: even those who are predisposed toward populist ideas reject this notion. This contrasts with populist voters in countries such as the US, where Donald Trump ran a whole campaign on “draining the swamp in Washington” and notions of “crooked Hillary”.

Looking beyond our conjoint experiment, we also examined whether populist attitudes are correlated with voting for actual political parties. Figure 2 plots the average marginal effect of a one unit increase on the populism scale (which ranges from zero to eight) on the probability of voting for each of the major parties (controlling for gender, age, education, income, and left-right self-placement).

Figure 2: Populist attitudes and probability to vote for party 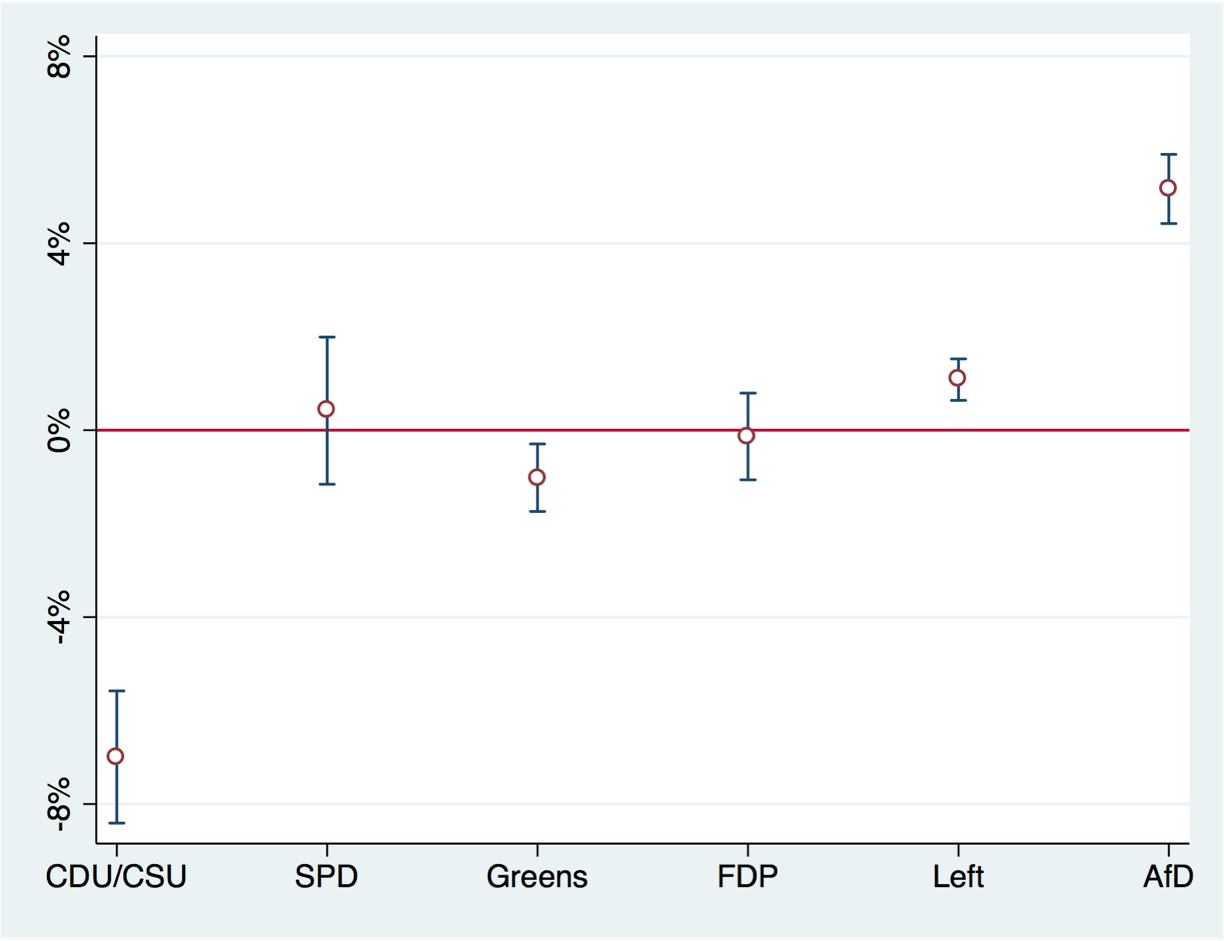 This reveals that populist attitudes are key correlates of vote choice in these elections, even when controlling for sociodemographic, socioeconomic, and political factors. The prime beneficiary of populist attitudes is the AfD. A one unit increase on the populist attitudes scale is associated with around a five percentage point higher probability of voting for the AfD.

In this view, the 2017 German elections are anything but boring. Angela Merkel may just win her fourth chancellorship in a row, but anti-establishment and populist attitudes have been powerfully activated in this campaign and they are not only reshaping the party system, but it is the CDU/CSU that is most negatively affected by them.

Note: This article gives the views of the authors, not the position of EUROPP – European Politics and Policy or the London School of Economics. Featured image credit: Markus Spiske (CC BY 2.0)

Christopher Wratil – University of Cologne
Christopher Wratil is currently a Thyssen Postdoctoral Fellow at the Cologne Center for Comparative Politics. His research focuses on the study of political representation, public opinion and populism in the European Union.