The Czech Republic is due to hold legislative elections on 20-21 October. As Seán Hanley explains, the election coverage has been dominated by the campaign of Andrej Babiš, whose ANO movement currently tops the polls. He writes that while parallels have been drawn between Babiš and Donald Trump, the reality is more complex than this comparison suggests, and Babiš may well find his power constrained in office even if he secures a sizeable victory in the election.

There is only one major issue in the Czech Republic’s upcoming elections on 20-21 October – and his name is Andrej Babiš. Since bursting onto the political scene – and straight into government – in the 2013 elections, the Slovak-born agri-food billionaire and his ambitions have defined Czech politics over the last five years. Having spent four years as junior partner in an acrimonious coalition government with the Czech Social Democrats (ČSSD) and the smaller Christian Democrats (KDU-ČSL), and having consistently topped every poll since early 2014, Babiš and his ANO movement now seem set to win this weekend’s election by a considerable margin.

Polls suggest ANO will receive just under 30% of the vote, despite Babiš and several associates from his Agrofert conglomerate being implicated in and then formally charged with embezzling some two million euros in EU subsides intended for SMEs, which were allegedly directed to a company he controlled. As in 2013, Babiš and ANO are pitching themselves as a non-ideological citizens’ movement doing battle with corrupt and ineffective ‘traditional parties’ – who Mr Babiš says have hamstrung him in government and victimised him with bogus anti-corruption probes.

ANO thus seems set to become the dominant force in an otherwise fragmented political landscape: none of the seven other parties projected to enter the Chamber of Deputies is likely to exceed 15 per cent support. Although the Social Democrats have installed foreign minister Lubomír Zaorálek, rather than unpopular outgoing prime minister Bohuslav Sobotka, as the public face of their campaign, the party’s support remains stuck at historically low levels, with most pollsters predicting the party will gain only 12-13%. This would mark a third steep fall in Social Democrat support in as many elections and the party’s worst result since 1992. Support for the hardline Communist Party (KSČM) has held up better, with the KSČM likely, on most projections, to slip back two or three points from the 14.9% won in 2013.

The once powerful conservative/Eurosceptic Civic Democrats (ODS) have enjoyed some success in de-toxifying their brand under the leadership of former education minister Petr Fiala after a catastrophic election in 2013 when the scandal-hit party crashed out of government with a mere 7.7 per cent. In the last two years, the ODS has steadily consolidated and generally outpolled its more liberal, pro-European centre-right rival TOP09. However, its support seems to have slipped in the last few weeks of the campaign, suggesting that may struggle to break into double figures. TOP09 itself has seen its support continue to erode and, although most polls put the party at just over the 5% threshold needed for parliamentary representation, there are questions over their long-term electoral and political viability.

Many younger, urban voters who once gravitated towards TOP09 seem to have turned toward the Czech Pirate Party (ČPS), who seem likely to enter the Czech parliament for the first time following a mini-surge in support. Flamboyant right-wing populist Tomio Okamura, whose unusual Czecho-Japanese heritage serves as a pretext for a strident mix of anti-Roma invective, inflammatory anti-Islamic rhetoric and political showmanship, is also set to re-enter parliament. Buoyed by consistently high personal popularity ratings, Okamura, who heads the Freedom and Direct Democracy (SPD) list, which replaces the ‘Dawn’ movement he led in 2013, also seems to be attracting younger voters. Finally, the Christian Democrats (KDU-ČSL), having seen ambitious plans for a centrist alliance with the national independents’ grouping STAN collapse in July, are again relying on a loyal core vote in more rural Catholic regions of the Czech Republic to push them over the threshold.

Will Babiš boss it?

As leader of the largest party, Andrej Babiš seems certain to be nominated as prime minister designate by the president Miloš Zeman, who is a close political ally. Neither Babiš himself nor Zeman see ongoing criminal charges as an obstacle and, while traditional parties have proved capable of working together to pass conflict-of-interest legislation targeting Babiš, their votes and seats will almost certainly be too few, and their political differences too great, to form a rainbow coalition against the billionaire politician. It is therefore difficult to envisage any government without ANO.

It may, however, also prove difficult to construct a government with ANO – and, in particular, with Babiš. TOP09, the Civic Democrats and the Communists have rejected governing with ANO, while Babiš in turn has ruled out entering government with the Communists, TOP09 or Tomio Okamura. The Pirates are willing to enter a coalition with ANO provided that Andrej Babiš does not hold ministerial office, as are the Christian Democrats and Social Democrats who want the corruption case to be resolved first. Babiš too is willing to contemplate a renewed coalition with the Social Democrats. The re-opening by a Slovak court of the question of whether Babiš knowingly acted as a secret police informer during the 1970s and 1980s while he was an executive for a state-owned petro-chemical trading company may also complicate matters.

Much will depend on the precise breakdown of votes and seats and how many (and what size) parties ANO needs to govern. While the Czech Republic has a proportional representation system, its unevenly sized regional constituencies can brutally under-represent smaller parties. Recent estimates of the number of seats that ANO could win in the 200 member Chamber of Deputies have varied from as many as 92 to as few as 68. As the experience of 2013 shows, parties’ pre-election commitments can prove highly flexible (and reversible) post-election. However, once the dust settles, some variant of the current centrist coalition looks more likely to emerge.

A Czech Trump? A Czech Orbán? None of the above?

Media commentary has painted Babiš as a ‘Czech Trump’, a nationalistic, anti-EU populist itching to team up extremist parties to tip yet another Central European country on a path toward illiberal democracy. But the reality is more complex and more prosaic – and the threats to Czech democracy more insidious and slow burning. On any measure, Babiš is a populist. His folksy self-presentation as the plain spoken practical businessman finally disgusted by corruption, and ANO’s carefully made image as a movement of practical ‘do-ers’ taking on a decrepit and corrupt party establishment who have failed ordinary people since 1989 is textbook stuff.

And while the ANO election programme may be an anodyne grab-bag of technocratic promises, Babiš has spelled out his goals clearly enough. His 2017 book What I Dream About When I Happen to be Sleeping – a personal vision of Czechia in the year 2035 – offers his more sweepingly, anti-political, populist vista for Czech democracy: a strongly majoritarian, centralised system that eliminates or abolishes many key institutional checks and balances: the Senate, regional government, PR (Babiš wants a British-style first-past-the-post system), and even local councils. Voters would elect their (very powerful) local mayor, their parliamentary representatives and their president and that would be it. He would, as he famously said in 2013, run the Czech Republic ‘like a firm’, more recently modifying this to a ‘family firm’ to reassure voters that he is about community not pure profit.

Babiš’s record suggests a man with both the appetite for accumulating power and little patience with the compromises and coalition-building inherent to democratic politics. Although his Agrofert company presents itself as a home grown industrial giant generating employment and income for local Czech communities, investigative journalists, such as the makers of the documentary Selský rozum [Common Sense] suggest an operation ruthless in taking over and eliminating smaller competitors, swallowing up Czech and EU agricultural subsidies, and cutting costs by using cheap Ukrainian guest-workers, imported foodstuff and lower standards when it can.

Despite styling itself as a citizens’ movement, ANO is a highly centralised structure with a small carefully managed membership that concentrates power in the hands of the party’s leader and leaves little space for internal debate – its leader’s attitude to internal democracy reportedly being one of “I pay, so I decide”. Babiš also admires the executive power wielded by Orbán – telling the Hungarian ambassador as much in an unguarded moment when being recorded for a TV documentary. Since 2013, Babiš has bought heavily into the media, most notably acquiring the two national dailies Lidové noviny and Mladá fronta Dnes, using their coverage both for political support and – as the leak of a covertly recorded conversation between Babiš and a journalist on one paper graphically showed – target rival politicians and media outlets.

Despite wishful British Eurosceptic thinking, however, Babiš lacks both the ideology and, in all probability, the political reach to be a Czech Orbán or a Czech Trump. Babiš has harrumphed about the EU’s policies on migration and refugees and used fear of refugees and Muslims to play to Czech public opinion, which has long been hostile to and fearful of the (theoretical) prospect of immigration from both EU and non-EU states. The Union, he has argued, should be a fortified enclave in a hostile world – something like an Asterix village, processing refugees in huge camps beyond its external borders. He has also turned against the euro, saying that he wanted to retain the Czech koruna as an expression of sovereignty.

But look more carefully and we find that Babiš is no hard Eurosceptic. Despite the blunt confrontational language, his Euroscepticism is, in substance, little different from that of most Czech mainstream parties and designed partly to placate public opinion. As the head of a big conglomerate in a small country, he unsurprisingly favours EU market, scientific and infrastructural integration, rules out introducing the euro only for the time being, and chaffs against overly-bureaucratic regulation potentially constraining national sovereignty and competitiveness. Although not without a sinister authoritarian streak, Babiš’s power-hungry technocratic populist vision is, in short, more a mix of Harvard Business School and nomenklatura capitalism, than the counter-cultural, anti-Western conservative nationalism on show in Hungary or Poland.

It is a techno-populist managerial vision likely not to be realised – at least any time soon. Even if he does max out next weekend and win – or come close to – an absolute majority, he will be far from securing the ability to rewrite the constitution due to opposition in the upper house. The upper house is elected, as in the US, in a staggered process across a six-year cycle – a process in which ANO has so far fared very poorly. Although it is possible that ANO could gain enough support to perhaps govern with a single pliable ally like the Pirates, Czech voters may equally be set to hand Babiš a distinctly Pyrrhic victory, leaving him centre stage in terms of government responsibility, locked once again into the conventional coalition politics he detests, and politically exposed as the prosecution proceedings against him, and perhaps further investigations, unfold.

Note: This article also appears on the author’s personal blog. It gives the views of the author, not the position of EUROPP – European Politics and Policy or the London School of Economics. 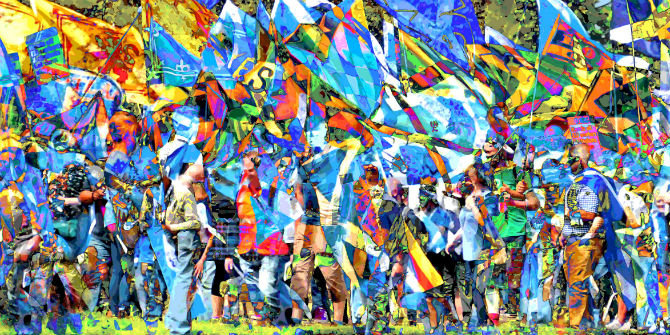