The last state to join the European Union was Croatia in 2013, but when can current candidate states expect to secure their accession to the EU? Tina Freyburg and Tobias Böhmelt present results from a new study of the capacity of candidate states to meet accession criteria. They find that only one of the current candidate states (Macedonia) would be projected to meet the criteria by 2023, with Serbia and Turkey likely to succeed by the mid-2030s, and Albania and Bosnia-Herzegovina unlikely to meet the criteria before 2050.

After several years of being largely absent from the agenda, the Western Balkans are back in focus – mainly due to the refugee crisis but also in response to Russia’s renewed interest in this part of the world. While Russia confidently announces that it can offer an alternative to Euro-Atlantic integration, the European Union reaffirmed earlier this year in Trieste its commitment to enlargement for the Western Balkans “Six” with a view to helping them fulfil the economic and political requirements for accession to the EU. In particular, the German government reinforced its “Berlin Process” initiative by suggesting a “Berlin Process plus” agenda, also called a “mini Marshall Plan,” in order to give the region’s economies a lift – and, in a way, to also compensate for the long wait for EU membership.

Yet, how likely is it that a candidate state will be ready to join the EU within the next 10, 15 or more years? In a recent study, we looked at the candidates’ capacity to comply with the massive EU acquis communautaire, which constitutes the primary condition for proceeding with the negotiations and ultimately securing the accession of a new EU state.

Using the 2004 accession round as a benchmark, our results show that only one country of the current and potential candidates is likely to sufficiently comply with the accession criteria by 2023, FYR Macedonia. While Serbia and Turkey are likely to succeed in the mid-2030s, Albania and Bosnia-Herzegovina might have difficulties in meeting the set standards even by 2050. Montenegro, despite being considered as one of the Western Balkans states with the best chance to accede, was omitted from the analysis due to a lack of data.

These figures are based on predictions of a state’s ability to comply with EU laws using proxies for adjustment costs and administrative capacities. Specifically, we use indicators that accurately predict compliance behaviour of previous, current and potential candidate states between 1998 and 2016 and for which we have projections up to 2050. The figure below shows the predicted level of compliance for each state in the study.

Figure: Candidates’ predicted levels of compliance with the EU acquis (click to enlarge) 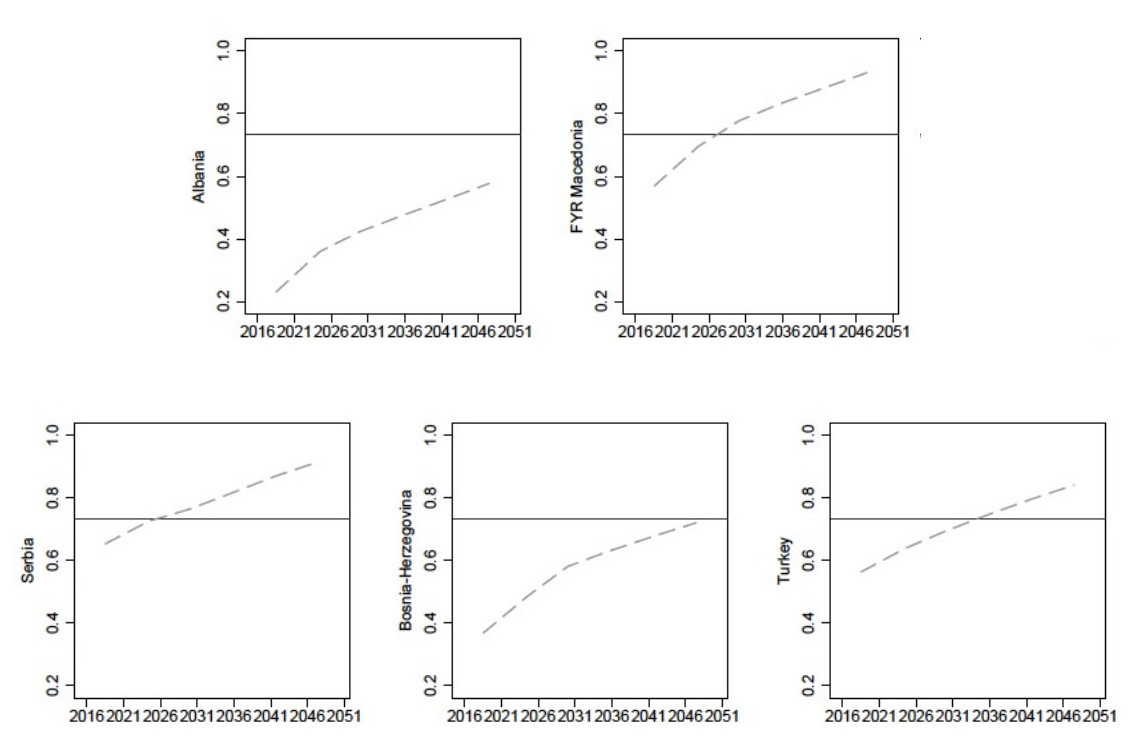 Note: The horizontal solid lines represent the threshold for a sufficient level of compliance based on the 2004 round of enlargement. The dashed lines show the forecasted compliance levels for 2017-2050.

What is certain is that states in the Western Balkans hope to join the EU one day. This is the expectation held by any applicant facing the demanding process of bringing all its national laws, regulatory frameworks and administrative practices in line with the Union’s standards and laws. And the future of enlargement policy is, obviously, anything but determined.

Despite showing a certain path dependency caused by the rigidity of its rules, the process of enlargement is open to various influences that might change the timing of the Western Balkans candidates’ progress, if not their accession. Signs that perhaps indicate a quickening of the process might come in the shape of political changes, like the recent transfer of power to a more pro-European government in Macedonia. Conversely, the worsening state of Turkey’s democratic institutions might cause the enlargement process to freeze for several years.

Earlier work has paid little attention to predicting and forecasting states’ performance in implementing EU law. As a consequence, policymakers lack guidance for assessing the success of EU enlargement policy and for making an informed statement on the likely timing of future accession.

Knowing in advance which of the (potential) current candidate states are less likely to comply with EU regulations over the course of accession is essential for the EU’s monitoring and enforcement schemes, as well as for facilitating an informed public debate about future enlargement. Forecasting a candidate state’s ability to comply with the EU’s accession criteria can help to understand enlargement as a lengthy process. This insight might encourage the formulation of measures aimed at enhancing a candidate state’s capabilities.

Note, however, that our figures might still paint too optimistic a picture since we cannot account for random events or states’ unwillingness to comply in the future. The actual future compliance levels of the individual candidate states could well be even weaker than those predicted in our study.

In any case, our results underline the fact that claims, such as those made by the Vote Leave campaign in the UK’s EU referendum, that most of the candidates will join by 2020 are likely to be very much mistaken. To the contrary, more efforts are necessary if the EU wants to see “a practical and tangible advancement of all our six partners from the Western Balkans, an advance that will make their road towards the EU irrevocable”, as Federica Mogherini, the EU’s High Representative for Foreign Affairs and Security Policy, emphasised at the recent Bled Strategic Forum.

Note: This article gives the views of the authors, not the position of EUROPP – European Politics and Policy or the London School of Economics. For a longer discussion of this topic, see the authors’ recent article in the Journal of European Public Policy. 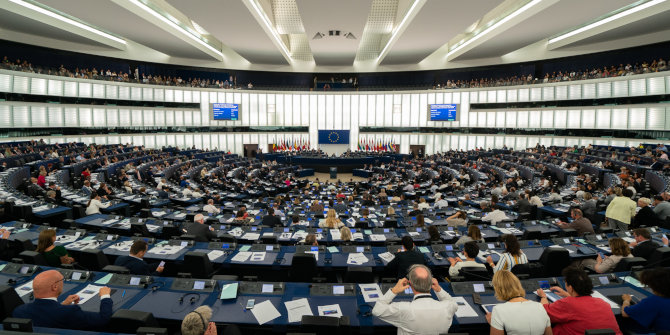