Opinion polls are a vital tool for understanding what the public wants from its political representatives, but is there a danger that poll results can influence the views of citizens? As Sveinung Arnesen writes, one of the potential issues with polling is that people may change their attitudes after learning what others think. A disconcerting possibility is that opinion polls create feedback loops, wherein the majority opinion becomes increasingly larger over time. Drawing on a new study of attitudes toward Syrian refugees and mandatory measles vaccination, he illustrates that this concern may be unwarranted.

Poll effects – and in particular the bandwagon effect – have been debated for decades. The bandwagon effect originates from electoral studies and refers to voters who decide to vote for the expected winner. The concept has since been applied beyond the electoral context, and now generally refers to a situation wherein a person acquires and/or expresses a preference that is in accordance with the preference of the majority because it is intrinsically gratifying to be on the winning side.

There are relatively few studies on the influence of polls in a non-election setting. Those that do exist demonstrate inconclusive results. In a recent study, I (along with my coauthors) adopted an innovative survey experimental design to assess the issue. This design made it possible to track the influence of an initial poll distribution across several subsequent poll iterations. This automated experimental procedure – labeled the dynamic response feedback – divides respondents in one survey wave into several groups. Each group is exposed to the distribution of opinion from the previous group at the same time as they are asked about their own opinion on the issue.

The procedure thus fetches previous answers given by respondents who have already completed the survey, and it presents – in real time – the current distribution to the respondent who is about to answer the question. If polls actually trigger feedback loops, this will be captured by this experimental design. For each new treatment group, there is a complementary control group, ensuring that the only thing that varies between the treatment and the control group is the poll information.

The first question we looked at concerned mandatory measles vaccination for children. One way of maintaining a high vaccination rate in society is to make vaccination mandatory. The respondents in our experiment were asked to answer the following question: “The vaccination of children has been heavily debated by the media recently. Some people think that it should be mandatory for all children to have measles vaccinations. To what extent do you agree or disagree with this?”

The second question asked about the accommodation of Syrian refugees in Norway. During the summer of 2015, the parliamentary majority in Norway decided to accommodate 8,000 extra refugees over the next three years, sparking a heated debate. Our experiment was fielded in The Norwegian Citizen Panel during the period of October 28 to November 16, 2015, at a time when the refugee situation dominated the news. The respondents were asked “To what extent do you agree or disagree that, over the next 3 years, Norway should accept more Syrian refugees than was previously decided?”

Our results indicated that nine out of ten respondents agreed that measles vaccination should be mandatory, and six out of ten agreed that the country should accept more Syrian refugees. The opinions were similar between the respondents who saw the poll about what others thought about the issues and those who did not. Hence, the polls did not create feedback loops wherein public opinion increasingly diverges from “true” public opinion. There is therefore little reason to fear that polls in and of themselves become self-fulfilling prophecies.

Yet, while public opinion is little affected by individuals’ exposure to information about the majority opinion, there are some indications of a bandwagon effect: Those who see the polls on vaccination and subsequently adjust their perceptions of others’ opinions, also tend to change their own attitudes on the issue in the direction of the majority opinion.

David Rothschild and Neil Malhotra have found that people’s susceptibility to changing their attitudes after poll exposure is highly issue dependent. Their study revealed that people seemed be more influenced by polls when they had weak pretreatment attitudes, knew little about other people’s attitudes toward the issue, and when their attitudes were not hardened by partisan predispositions. Our results support their second finding, in the sense that we find a mediating effect of the perception of others’ attitudes.

In contemporary democracies, citizens are continuously exposed to the political opinions of other citizens, often through opinion polls presented in different types of media and carried out by a wide array of political actors, such as political parties, think tanks, and interest organisations. Polls inform political decision makers about citizens’ views on political issues, information that helps them make policies that are responsive to the will of the people. The political consequences of opinion polls have been subject to debate, and both potentially positive and negative effects of polls have been proposed.

On the one hand, it could be argued that the frequent use and presentation of opinion polls may lead to increased opportunities for the public to learn about important political issues and public opinion. It has also been argued that polls inform political decision makers about citizens’ views on political issues, which helps in making policies that are responsive to the will of the people.

On the other hand, there are concerns that opinion polls may become self-fulfilling prophecies because the polls themselves may drive public opinion. If polls have the potential to initiate feedback loop dynamics, they will be counterproductive to the ideals of democratic deliberation. As Jon Elster has noted, these ideals presuppose the existence of public discourse among free and equal individuals, and wherein political positions must be justified by arguments, not peer pressure. The results from our study indicate that such fears may be unwarranted when it comes to exposing citizens to opinion polls.

Note: The full study is available free of charge at the Social Science Computer Review. The authors of the study are Sveinung Arnesen, Mikael P. Johannesson, Jonas Linde, and Stefan Dahlberg. This article gives the views of the author, not the position of EUROPP – European Politics and Policy or the London School of Economics. Featured image: Polling during the UK’s EU referendum, Credit: T.Seppelt (CC BY-SA 4.0) 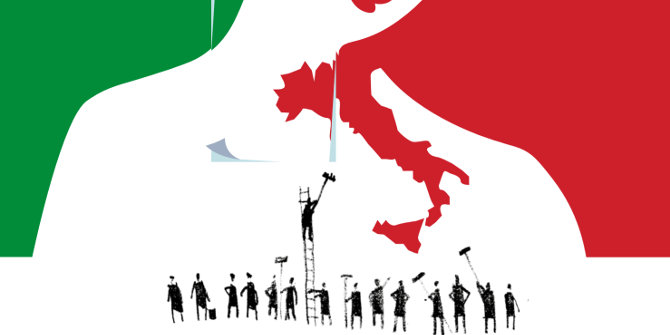