Ahead of the Italian elections on 4 March, opinion polls suggest an increasingly fragmented political scenario, with a hung parliament and likely difficulties in having a parliamentary majority in support of a new government. But what will the vote mean for Italy’s relations with the EU? Lorenzo Codogno discusses the three most important themes in the Italy-EU relationship. 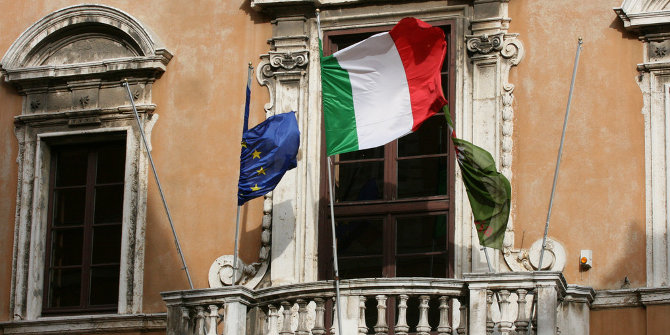 The outcome of the Italian elections remains highly uncertain. It will be a fight among three major forces, which individually are unlikely to command an outright majority of seats in parliament.

Detailed plans to enhance Italy’s lacklustre growth and reduce the worryingly high debt-to-GDP ratio are shockingly absent from the electoral debate. How will this electoral event affect the relationship between Italy and the EU ahead of important talks about the future of European governance?

A hung parliament would lead to a lengthy and challenging discussion on some form of broad or narrow grand coalition that would bring together the mainstream parties. There is also a small but not negligible probability that anti-euro, anti-establishment parties will manage to get a better-than-expected result and then team up together to support a new government.

How did Italy get to this point of political fragmentation and growing anti-European sentiment? A decade ago, Italy was among the most pro-euro countries in Europe, with a long history of being one of the staunchest advocates for further integration. In the most recent Eurobarometer survey, only 59 Italians out of 100 were in favour of a European economic and monetary union with one single currency, the euro. It was the most Eurosceptic outcome among the countries participating in monetary union.

This significant shift in attitude could be attributed to the three most problematic points in Italy’s relationship with Europe: fiscal policy, immigration and the banks.

The popular narrative is that Brussels contributed to deepening the crisis by forcing Italy to implement tight fiscal policies or so-called austerity. Under the pressure of financial markets during the European sovereign debt crisis, Italy increased the structural (cyclically-adjusted and net of one-offs) primary balance, which is the best measure of fiscal stance, from 0.6% in 2009 to 4.0% in 2013, with an almost 2.5 percentage point tightening in 2012 alone. However, since 2013 there has been a moderately expansionary policy, which has brought this metric down to 1.7% in 2017, according to European Commission data.

Even after the elections, no matter which party or coalition wins, the Italian government is unlikely to tackle the issue of the high debt-to-GDP ratio forcefully and decidedly. The Partito Democratico (Democratic Party) is mostly pro-European, although with some populist and anti-austerity flourishes (former PM Renzi repeatedly tried to increase the deficit leeway), and mostly pro-reform, although the positive momentum has declined sharply.

Berlusconi’s Forza Italia is mostly pro-European as well, although with a Eurosceptic spin. The introduction of a parallel currency (Am-lire) was mainly Berlusconi’s idea, not his party’s. Plans to sharply reduce taxation and partly unwind the pension reform are in contradiction with the stated objective of a 4% primary surplus (against an estimated 1.5% in 2017). Its overall stance towards the EU remains constructive, however, and there are no plans for Italexit.

A Northern League-led government would make the stance towards the EU and the euro more problematic. Italexit has been toned down, but not entirely, and the introduction of a parallel currency (mini-bot) has not been dismissed. The Five Star Movement appears to have put aside the idea of a referendum on the euro and the proposal for a parallel currency, but they could resurface at a later stage. The fight against fiscal rules and the so-called European straightjacket would mount.

Immigration is another major topic of the electoral campaign, possibly the most important one, especially following the shooting of Africans by a neo-Nazi in Macerata. Italy does not have a long tradition of welcoming foreign immigrants, despite all humanitarian efforts to save them in the crossing of the Mediterranean Sea. Foreign ‘regular’ residents accounted for only 8.3% of the population in 2016. However, that percentage goes up to 14.1% when looking at the 18-39 year age group, with a high concentration in Northern Italy and major cities.

With a fertility rate of just 1.35% and the natality rate at 0.8%, Italy’s population is ageing fast. Meanwhile, in 2016, 115,000 Italians moved abroad, a number which has steadily increased over the past few years – giving rise to concerns about a brain drain. Italy will desperately need skilled migrants as its population continues to shrink.

The massive demographic shift and the socio-political implications that follow, makes the immigration issue all the more delicate. Until recently, neither Italian nor European authorities have been able to provide adequate policies to tackle these difficult issues. Anti-establishment parties are calling for a massive change in policies. The Five Star Movement and far-right parties would seek to pull Italy out of the European Union if Brussels refuses to re-negotiate fiscal and immigration rules. Any such government would be off to a rocky start in the relationship with Brussels.

Though the situation has improved, it remains a weak spot in the relationship with the EU. Nevertheless, any mainstream government would be strongly supportive of a swift completion of the Banking Union. In the risk reduction-risk mutualisation equation, Italy can now put on the table an already achieved reduction in banks’ risk. It would probably be willing to compromise on a gradual and moderate reduction of the position in government bonds in the portfolio of banks, therefore opening up a possible compromise with Germany on the European Deposit Insurance Scheme.

Italy’s long tradition of supporting pro-European policies and economic integration will likely be continued by any mainstream government, albeit with slightly different sensitivities and approaches. However, anti-establishment parties have pledged to fight for more sovereignty, which would put the country on a collision course with an idea of a more integrated Europe.

Much ado about nothing? We will find out soon.

Note: A shorter version of this article first appeared on the website of Europe’s World, the policy journal of Friends of Europe. The article gives the views of the author, not the position of EUROPP – European Politics and Policy or the London School of Economics.

Lorenzo Codogno – LSE, European Institute
Lorenzo Codogno is Visiting Professor in Practice at the LSE’s European Institute and founder and chief economist of his own consulting vehicle, LC Macro Advisors Ltd. Prior to joining LSE, Lorenzo Codogno was chief economist and director general at the Treasury Department of the Italian Ministry of Economy and Finance (May 2006-February 2015). Throughout this period, he was head of the Italian delegation at the Economic Policy Committee of the European Union, which he chaired from Jan 2010 to Dec 2011, thus attending Ecofin/Eurogroup meetings with Ministers. He joined the Ministry from Bank of America where he had worked over the previous 11 years. He was managing director, senior economist and co-head of European Economics based in London. Before that we worked at the research department of Unicredit in Milan.