Immigration has been a key topic in Italy’s election campaign, with several candidates arguing that the flow of people into the country during the migration crisis has increased the risk of crime. But has immigration really generated more crime in Italy? Drawing on data from the Italian National Institute of Statistics, Donato Di Carlo, Julia Schulte-Cloos and Giulia Saudelli illustrate that crime rates across Italian regions and the share of crimes committed by foreigners have both fallen significantly over the last decade.

On Sunday, Italians will head to the polls for the second national election since the country’s sovereign debt crisis began in 2011. In addition to the usual promises of tax cuts and generous pension reforms, the campaign has largely revolved around concerns about immigration and security. Indeed, the focus of public debate has gradually veered – or skillfully been steered – towards the nexus between migration, crime and security.

On the one hand, the centre-left Democratic Party, led by Matteo Renzi, has maintained that its government effectively acted to stop the arrival of new migrants from Libya. On the other side of the spectrum, former Prime Minister and returned leader of the centre-right coalition Silvio Berlusconi has declared that he will deport 600,000 illegal immigrants if his faction were to win the elections.

Recent events in Italy have only exacerbated the debate on migration and crime. At the beginning of February, a former Northern League candidate went on a racially motivated shooting rampage against African migrants in Macerata, Central Italy. The man, Luca Traini, said he was motivated by a desire to avenge the killing of an 18-year old woman. Four Nigerian men have been charged with her murder and are currently under investigation.

While on the surface the main political parties condemned Traini’s attack, some leaders have sought to exploit the criminal act to reap electoral gains, in particular among the right and centre-right contingents. Their main argument is that more immigration leads to increasing crime rates and therefore less security. This seems to be having an effect on the public. Recent polls show that 58% of Italians are afraid of immigration, while over 60% of those surveyed do not feel safe in the city they live in.

Indeed, both before and after events in Macerata, Silvio Berlusconi, leader of Forza Italia, declared that Italy has some 600,000 migrants that “live off trickery and crime”. Similarly, Matteo Salvini has repeatedly claimed that immigrants are “lazy criminals” and Giorgia Meloni never misses a chance to remark that “uncontrolled migration leads to insecurity, crime and decay”. But is there an empirical connection between the rise of immigration in Italy and crime? Has Italy really become more unsafe over time due to immigration?

Immigration and crime in Italy: A missing link?

If it were true that Italy is becoming more and more insecure, as claimed by some politicians, we would expect to find increasing crime rates, both on average and when focusing only on crimes committed by foreigners. We have analysed the most recent data published by the Italian National Institute of Statistics (ISTAT) available at regional level for the period 2007-2016. Data on the number of crimes committed across the country shows that crime has diminished everywhere in Italy, both in the economically stronger regions of the North and in the crisis-ridden South of the country.

On average, crime rates per 1,000 inhabitants have decreased by almost 25% between 2007 and 2016 across all Italian regions. Yet, even if we look at the within-regional variation of crimes committed, we find a decreasing trend. The colour of the single observation points in figure 1 below indicates the deviation from the regional-specific mean of a specific observation. In 2016, we see that most observation points are green: i.e. the majority of the 20 Italian regions plus the 2 autonomous provinces display a lower crime rate than their individual regional average of the previous ten years. Larger points in the figure correspond to regions with a higher population, while smaller points correspond to regions with fewer inhabitants. 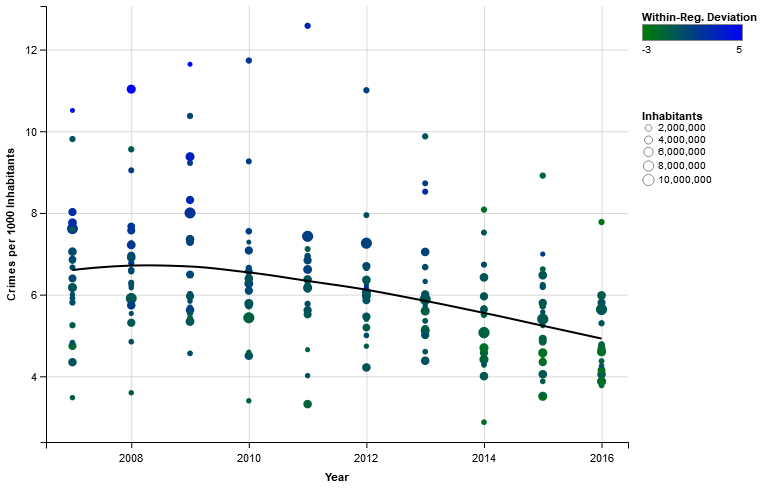 As expected, the number of granted asylum permits in Italy follows the opposite pattern. Since the onset of the migration crisis in 2013, the share of people who have been granted asylum in the country has increased almost exponentially. This trend can be seen in the average across the regions (the black line in figure 2) and within each region as indicated by the light colour corresponding to a positive deviation from the region-specific mean over the observation period. 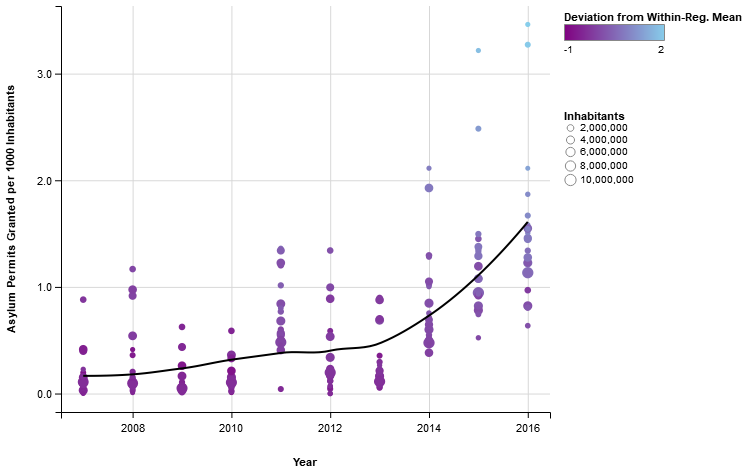 The Italian statistical authorities do not publish data on the crimes committed by individuals who have been granted asylum. Yet, there is data available on the number of crimes committed by all non-Italians. When looking at the share of crimes perpetrated by foreign residents in a given region, on average, we find the same decreasing trend that we found for the overall crime rate in the country.

Yet, in contrast to the overall crime rates in Italy, the share of crimes committed by foreigners is also decreasing within every single region in Italy with respect to the regional average. This holds for all regions in Italy since 2014, from the northern tip of the country in the Alps, to the southernmost spot in Lampedusa. Today, the share of convicted foreigners is at an unprecedented all-time low. The average regional crime rate among foreigners has decreased by around 65% between 2007 and 2016.

Figure 3: Share of crimes by foreigners among foreign population across Italian regions 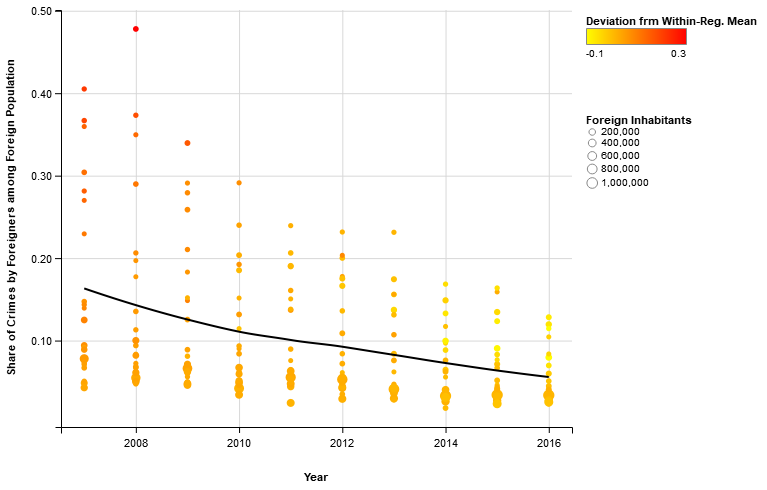 Campaigning on the alleged link between immigration and insecurity seems to be the glue that is keeping the centre-right coalition together. Amnesty International’s Hate Barometer has been monitoring the Facebook and Twitter profiles of candidates in the election and leaders from the four main parties, for a sample of 1,425 people. Up until 22 February, the barometer recorded 253 instances of messages that “perpetuate stereotypes, contain racist or defamatory statements and incite hate or violence.” The research found that 95% of the online messages were written by candidates from the centre-right: 50% are Lega members, 27% members of Fratelli d’Italia (Brothers of Italy) and 18% of Forza Italia.

Italy’s elections are fast approaching, and a high number of voters are still undecided. According to the polls, around 30% of Italians say they do not know how they will vote on Sunday. A relevant share of these “swing” voters could be swayed by the parties’ stance on immigration, an issue that has been among the most salient ones in the campaign. Our analysis shows that the populist claims of a supposed link between immigration and crime are found wanting.