Italy’s parliament is reconvening today following the Italian election on 4 March, with a high degree of uncertainty still existing over the nature of the country’s next government. Maria Chiara Vinciguerra assesses how Lega and the Five Star Movement came to be the greatest winners from the election, and the long-term implications of the result for political stability in Italy and the rest of Europe.

Populists were the real winners of the Italian election, with the country split into three areas of influence: a Five Star Movement majority in the South; a Lega-dominated centre-right in the North; and a fragmented buffer zone in the Centre, characterised by divergent political visions. While in line with the broader populist trend in European politics over the past two years, the fragmented nature of Italian populism raises questions not only about its origins and distinguishing features, but also about its political impact on the Eurozone and the broader EU. 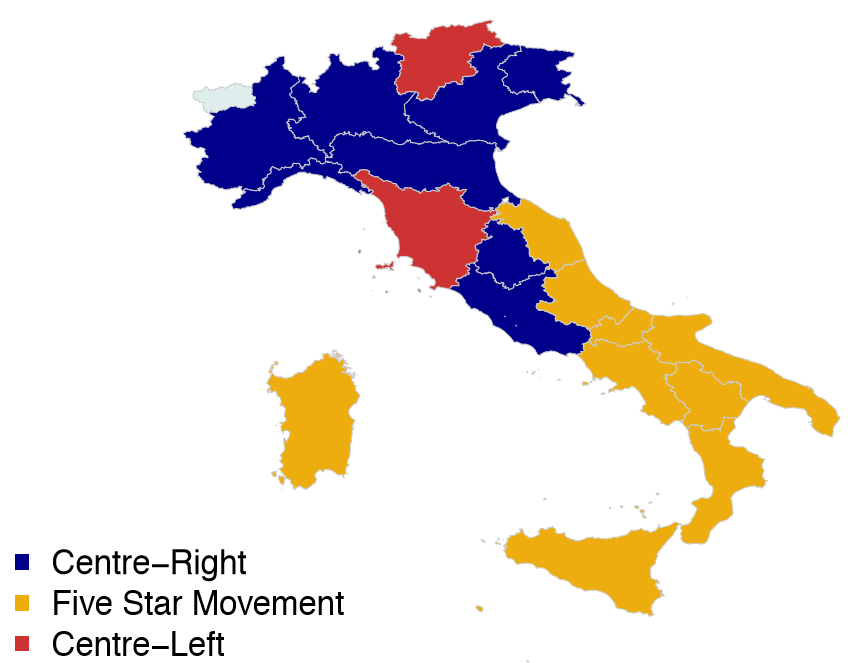 While partly substantiating the argument that populism in Western Europe develops around the themes of immigration, Euroscepticism, corruption and regionalism, the main factor contributing to the success of populists in Italy lies in the perceived failure of both the right and the left to deliver long-promised reforms of stronger growth, stability and employment.

Despite serving as Prime Minister in four separate governments, Silvio Berlusconi largely failed to deliver on his promise of breaking with the country’s past. Instead, he was forced out of office when the financial crisis hit in 2011, and was later banned from holding public office for tax fraud (a ban that expires next year). On the other side of the political spectrum, Matteo Renzi’s Democratic Party formed a new government in 2014 and initially gained widespread support for his programme of reforms tackling youth unemployment and the public debt, among other things. However, Renzi’s attempt to modify the country’s political system via a constitutional referendum ended in failure, and became an effective plebiscite on the Prime Minister. Following Renzi’s resignation, the country was pulled back into chaos, resulting in Italians, disenchanted with the political class, turning to both old (Lega) and new (the Five Star Movement) populist movements in a desperate hope for long-term change and stability.

While allegedly offering an alternative to traditional parties, Italian populists do so in an oddly bifurcated way, simultaneously extremist and normalised, moderate and outspoken all at once. On the one hand, the Five Star Movement appeals to a desire for radical change in Italian politics, but without taking a clear stance on either of the hottest issues of the moment: migration and membership to the European Union. Especially after the change in leadership between Beppe Grillo and Luigi Di Maio, the party has relentlessly disowned previous statements on these themes, trying to appeal with its moderation to a broader audience of younger, more educated Italians.

On the other hand, Lega was initially founded in the 1990s as a separatist regional party calling for the separation of the industrialised North from the once derided and crime-riddled South. The party came to power four times in the shadow of Berlusconi’s mandates. Its separatist image was formally erased in the leadup to the 2018 election, reflecting a gradual change in priorities that started in 2006. The party has increasingly emphasised a united Italian stance against immigration and has attempted to broaden its appeal to other areas of the country, notably in central and southern Italy.

Italian populists constitute an exceptional case in comparison to other European parties as they base their appeal on a moderate revolution: one that pushes for change while cautiously taking into account Catholic values, and even making strategic use of them. Aware of the ideological power of the Church in Italy – a country where about 75% of the population is Catholic – both Lega and the Five Star Movement have tried to express sympathy with the Church, albeit without any success. Grillo recently attracted the ire of the Vatican for comparing himself to St. Francis, while Lega’s leader, Matteo Salvini, has had a well-publicised quarrel with the Pope over the latter’s call for Italians to welcome refugees into the country. Both cases point to the unbridgeable ideological gap between populism and religion, originating not only in their different senses of morality, but also in the populist tendency to ‘sacralise’ politics, which naturally clashes with the Vatican.

From a broader European perspective, a populist-led government in Italy might not only be the driver of a renewed political and economic crisis at the domestic level, but could also cast a shadow over the EU. The risk of a political crisis is especially high given that the new electoral system – the Rosatellum, which is a mix of proportional and first-past-the-post voting – provides that only parties, or coalitions of parties, winning over 40% in the two chambers have a realistic chance to govern. Neither the centre-right coalition (37%) nor the Five Star Movement (32%) can achieve this alone, and the centre-right is now destabilised by the leading role of Lega within the coalition. A weakened Berlusconi, who must also contend with old age and his ban from holding office, will find it difficult to prevent Lega from pursuing a strongly Eurosceptic agenda.

It will now be up to President Mattarella’s mediating role to solve the political impasse in the upcoming consultations once all MPs and the Presidents of both Chambers have been elected. Regardless of who steps into power (and when), the chances are high that the current Rosatellum will make it hard for any side to govern, even if they have the numbers to do so. The new electoral law was intended to reduce political fragmentation, but it did not ultimately solve the underlying issues. And until these issues are addressed, the long-term stability of the country and the broader Eurozone will continue to be called into question.