In GDP terms, the Russian economy is much smaller than that of the EU, yet from a political and military perspective, Russia is a major player in global affairs. Paul De Grauwe argues that Europe grants Russia this power by leaving defence as a matter for each of its constituent nations, instead of having a combined army.

Before answering that question, first some other figures that illustrate how much of an economic lightweight Russia is. US GDP reached US$ 19 362 billion in 2017. With GDP as a yardstick, the US is 13 times bigger than Russia. In the same way, other countries can be compared with Russia. China is economically 8 times larger than Russia; Germany 2.5 times more, France 1.8 more, and the European Union as a whole is 12 times bigger than Russia.

Russia is not a major player in the field of military spending. To have a certain military weight, that country must reserve a much larger share of its GDP for defence than the other countries. To mean something militarily, Russia has to put a heavy burden on its own economy. I come back to my question: why is it that Russia, which economically is a lightweight, has such importance politically and militarily? Here is an attempt to answer that question.

Finally, and this is my most important point, Russia is powerful because Europe grants that power to Russia. Europe has built up an economic union but not a defence union. The European Union is economically 12 times larger than Russia; a huge potential power. However, this economic power is not converted into military and political power because defence has remained a national matter. By merging their military capabilities, it would be possible for France and Germany to build a credible defence against Russian threats, without having to spend more. The combined military spending of such a Franco-German defence union would be 50 per cent higher than Russian military spending. Enough to offer a counterweight to a Russian dictator whose political and military ambitions in Europe remain unknown.

“Si vis pacem, para bellum” said the Romans. If you want peace, you should prepare for war. Translated to the European situation of today this means that Europe should build a credible defence union. This by itself would reduce the military and political power of Russia.

Note: This article was originally published at Paul De Grauwe’s personal blog and is reproduced with permission. The article gives the views of the author, not the position of EUROPP – European Politics and Policy or the London School of Economics. Featured image credit: greg westfall (CC BY 2.0) 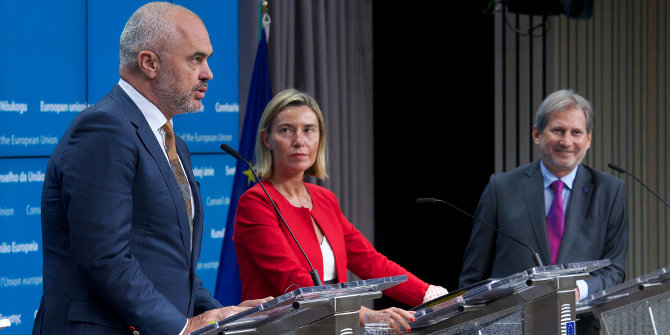