The Basque separatist group ETA has formally announced it is disbanding, following a decades-long campaign that claimed the lives of over 800 people. George Kassimeris writes that ETA’s conception of the political environment was always one of resistance and violence. But while history will judge ETA as a failed terrorist group, the lesson for the rest of Europe is that neither absolutism nor denial are effective ways of solving complex issues of national security. 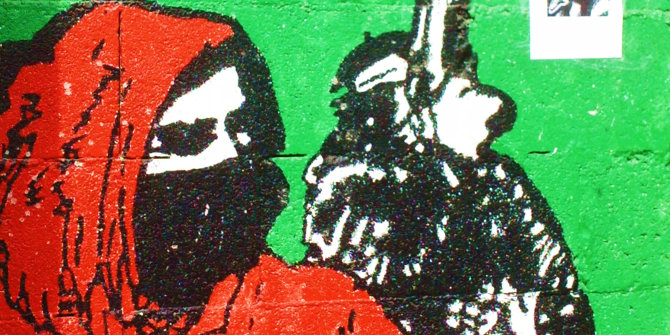 The reaction of Alfonso Alonso, the leader of Spain’s governing Popular Party in the Basque region, when asked to comment on ETA’s decision to dissolve itself, spoke volumes about the trauma and the poison the separatist group’s decades of violence has inflicted on Spanish society. “Neither ETA’s history nor its responsibility can be dissolved’, he said. ‘We will never forgive them.”

The bitterness is understandable. For Spain, and the Basque region, have been suffering at the hands of ETA one of the most lethal, protracted and intransigent campaigns of terrorism in modern Europe – 58 years, to be precise. In all this time, ETA militants assassinated Spanish politicians, magistrates, and newspaper publishers, planting roadside bombs and firing rockets, killing in the process more than 800 people.

What caused such a persistent and long-standing volume of terrorist violence? What were the reasons lying behind the Spanish state’s failure to defeat ETA, particularly when contemporary organisations such the Red Army Faction in Germany and the Red Brigades in Italy had been long ago crushed?

Founded in 1959, ETA — whose full Basque name, Euskadi Ta Askatasuna, means Basque Homeland and Freedom — began as a Marxist revolutionary, independence movement during the fascist dictatorship of General Francisco Franco. ETA violently opposed the Franco regime, which suppressed opponents and banned minority cultures and languages, including that spoken by the Basques. The group’s violent methods, however, continued to function as first-choice weapons of confrontation and resistance even after Franco’s death and Spain’s return to democracy, with the central government in Madrid granting considerable autonomy to the Basque region.

Throughout its campaign, ETA’s conception of the political environment was always one of resistance and violence. ETA maintained an extremely one-dimensional view of the world, peopling it with clearly demarcated heroes and villains. From the outset, the group saw violence as the most effective form of political pressure against what it perceived as an unfair and unresponsive political system. Although the group’s methods during the Franco years drew support from a wide range of anti-fascism opponents, its fanatical nationalism, contempt for the Madrid central government, and a cult of violence for its own sake, prevented ETA from understanding that its narrow belief system was incompatible with modern Spanish democratic principles.

At the same time, however, ETA’s stubborn terrorist campaign exposed critical deficiencies within Spain’s political structures: irresolute administrations, squabbling intelligence services and a cumbersome judicial system. ETA might have been more easily contained had the Spanish governing elites and the security authorities acted in a more balanced way, combining security pressure to destroy ETA infrastructures and reforms intending to remedy grievances across the Basque country. But their failure to understand the dynamics of politically-motivated violence, their disproportionate security responses, and their deliberate exploitation of the situation for political ends, all contributed to the growth and consolidation of ETA’s violent extremism. In Spanish public memory are still vivid the attempts by Jose Maria Aznar, the former conservative prime minister, trying (and failing) to influence the 2004 general election by deliberately blaming ETA for the Al-Qaeda mass casualty Madrid bombings which had taken place 72 hours before the election.

Terrorism is a political and social phenomenon that needs to be understood within a specific context. When a terrorist campaign lasts as long as ETA’s did, there has to be a reason for every bombing and each shooting. In Spain, it was always easier for successive governments to dismiss ETA militants as fanatical maniacs than to consider the message ETA militants were sending. For terrorism, whether one agrees or not, is not simply violence but violence with a message. Discerning the logic behind the terrorists’ brutal methods does not justify it, nor in any way diminish the barbarity of their acts. Trying to see things from the terrorist’s perspective can be an effective tool in the effort to defuse terrorism and deter further attacks.

History will judge ETA as a failed terrorist group. A history of failure, however, is not a history of insignificance. Spain was fortunate not to have suffered anything comparable to Italy’s Red Brigades anni di piombo (the years of lead) as ETA never held the nation to ransom through its terror. Spain’s institutions have successfully withstood high levels of terrorist activity, but it would be a mistake to underestimate the toxic effects ETA’s prolonged campaign of violence has had on political attitudes and values. Reading the Spanish media and talking to Spanish friends over the past few days, I was left with the impression that Alfonso Alonso’s ‘we will never forgive them’ position seems to be widely shared.

If Spain’s ETA terrorist experience has a lesson to offer to the rest of Europe, it is that neither absolutism nor denial are effective ways of solving complex issues of national security. Had the Spanish political establishment accepted at an earlier stage that ETA did not operate in a sociopolitical vacuum and that they were therefore confronting a political problem that required a political solution with everything that entails, the conflict over the Basque country might have ended sooner. In the long run, all politically-motivated conflicts eventually end. But the longer they are allowed to last, the more innocent people die and the more damage is caused.