Why do skilled migrants choose to travel to particular countries and what motivates them to stay there or leave once they have employment? Drawing on new research, Matthias Parey, Jens Ruhose, Fabian Waldinger and Nicolai Netz illustrate that skilled migrants enjoy higher earning potential when they move to countries that have greater levels of inequality. Meanwhile, less qualified migrants benefit from the compressed wage distribution in destination countries with higher equality.

Attracting and retaining high-skill individuals is vital for the development of knowledge-based economies, in which ideas drive technological progress. Understanding whether and why high-skilled individuals stay in a country or leave it is therefore crucial – for sending and receiving countries alike.

Several empirical studies have examined the selection of international migrants (e.g. Fernández-Huertas Moraga 2011, Grogger and Hanson 2011, Abramitzky et al. 2012, Kaestner and Malamud 2014, Gould and Moav 2016, Stolz and Baten 2012). Overall, the empirical evidence is mixed – while a few of these studies find support for the basic model, others reject the model and suggest that migration costs individuals face may systematically vary with skills (e.g. Chiquiar and Hanson 2005).

Do the migration pattern of high-skilled individuals’ respond to differences in inequality?

In contrast to the existing studies, in recent work (Parey et al. 2017) we analyse the migration decisions of high-skilled migrants, and differentiate between graduates with relatively low earnings potential and graduates with the highest earnings potential. Studying high-skilled migrants is important because they are the ones that usually bring about technological breakthroughs and innovation. Furthermore, studying high-skilled migrants is useful from a theoretical perspective because they face particularly low legal barriers to migration and migration costs. The economic forces at the heart of the Borjas model should thus be particularly relevant.

To study the selection of high-skilled migrants, we investigate the emigration of graduates from German universities to different countries worldwide. Germany is an interesting test case because it exhibits an intermediate level of earnings inequality. Moreover, studying multiple – both less and more equal – destinations is advantageous because we can examine both positive and negative selection, which two-country studies cannot do.

We use data on graduates from universities in Germany collected by the German Centre for Higher Education Research and Science Studies (DZHW). These data come from nationally representative longitudinal surveys and capture graduates even if they moved to another country. We examine the employment situation at five years after graduation of the cohorts graduating in academic years 1992-93, 1996-97, 2000-01, and 2004-05. We link the graduate data to different newly constructed country-level measures of earnings inequality, referring specifically to the highly skilled.

We develop a measure of earnings potential of migrants and non-migrants that is not affected by the migration decision. Because our data contain rich information on personal characteristics, e.g. on family background, high school grades, university education (including the specific university, subject, and grades), and mobility before enrolling at university, the measure allows us to differentiate between high- and low-productivity graduates 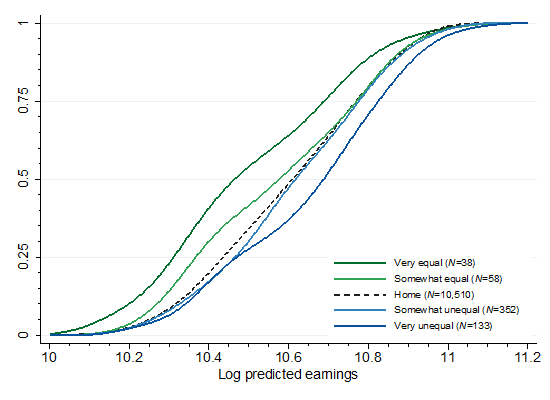 What drives the selection of high-skilled emigrants?

To identify graduate characteristics that drive the observed selection, we decompose predicted earnings of migrants to less equal and more equal countries (Figure 2). We find that migrants to less equal countries come from families with higher socioeconomic backgrounds, have received better university grades, and attended better universities. In contrast, migrants to more equal countries have graduated from universities and fields promising lower labour market returns. Females are also over-represented in this group. Interestingly, migrants to more equal destinations are, in fact, positively selected in terms of university grade. Selection patterns are thus consistent with the model predictions for most, but not for all characteristics. 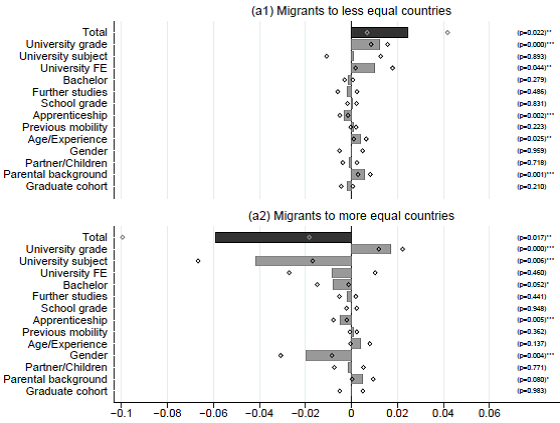 Our analysis provides robust evidence that the Borjas model is helpful for understanding the migration patterns of the particularly important group of high-skilled migrants. Consistent with recent research that has shown that inventors and other high earnings respond to tax incentives (Akcigit et al. 2016, Kleven et al. 2013), we find that high-skill migrants respond to economic incentives. Hence tax policies that affect real-wage inequality also play a role in determining which countries are able to attract the “best and the brightest.”

Note: This article originally appeared at our sister site, LSE Business Review. It gives the views of the authors, not the position of EUROPP – European Politics and Policy or the London School of Economics.

Matthias Parey – University of Essex
Matthias Parey is a senior lecturer at the University of Essex’s department of economics. He joined the department in September 2009. He is also a research fellow at the Institute for Fiscal Studies and the Institute for the Study of Labor (IZA), as well as a researcher at the ESRC Research Centre on Micro-social Change (MISOC). His research interests include labour economics, economics of education and microeconometrics.

Jens Ruhose – IZA
Jens Ruhose is a research affiliate at the Institute of Labor Economics (IZA). He is an applied economist, mainly interested in migration, labour economics, and economics of education-related topics. In the past, he has mainly worked on economic consequences of selective migration.
Currently, he is working as a postdoctoral fellow at the Leibniz Universität Hannover. He obtained a PhD in economics from the University of Munich in May 2015. He worked for the Ifo Center of the Economics of Education and was a Visiting Fellow at the Hoover Institution, Stanford University, for five months.  Previously, he has studied economics and international economics at the University of Paderborn (Bachelor and Master) and the University of Warwick (Master). His work also comprises policy consultancy work for the European Commission and for several foundations in Germany and the United States.

Fabian Waldinger – LSE
Fabian Waldinger is associate professor of management at LSE’s department of management. He obtained his PhD in the economics department at LSE in 2008 and worked in the economics department at the University of Warwick. He has held visiting positions at MIT Sloan School of Management, Harvard University, and the University of California at Berkeley. In his research, Fabian uses quasi-experiments to understand questions at the intersection of economics of innovation, economic history, and labour economics. In particular, he combines the collection of large data sets, often historical sources, with the use of modern micro-econometric techniques, to understand the driving forces of scientific productivity and the production and allocation of talent.

Nicolai Netz – DZHW
Nicolai Netz is a senior researcher at the German Centre for Higher Education Research and Science Studies (DZHW). He studied modern languages, cultural science, political science, and economics at the Universities of Bonn, Florence, and Maastricht. He holds a Ph.D. in Sociology from the University of Hanover. Since 2008, he examines the educational and professional careers of students and graduates. His current research focuses on the determinants and effects of high-skilled mobility.