Irish voters have backed a proposal to amend the current constitutional provision which places a ban on abortion in most circumstances. Anthony Costello assesses what the result means for both the country’s abortion laws and Irish society, noting that the will of the people has spoken and there is now a clear mandate for progressive change.

On 25 May, the Republic of Ireland held its Referendum on the Thirty-Sixth Amendment to the Constitution of Ireland Bill. The referendum put forward to the people a proposed amendment to the current constitutional provision (known as the Eighth Amendment) which places a ban on abortion in the Irish Republic. Having passed, the Thirty-Sixth Amendment will now permit the Irish government to liberalise legislation regarding the right to access abortions in the Republic.

The current legislation allows for abortion only under specific circumstances such as if pregnancy is a risk to the life of the mother, or if there is a risk of suicide. Although restrictions have been slightly eased over time, current legislation does not go far enough and continues to pose as a threat to the health and lives of women across the island.

Like many referendums on social issues, it was more than just about liberalising abortion. It was about securing the right for women to make personal choices over their own bodies during pregnancy in accordance with their personal circumstances and experiences, to eradicate systematic and social stigma around such choices, and to ensure that every Irish woman regardless of her choice, receives the best form of medical attention, support and healthcare in her own country. As of Saturday morning, the Irish government has been given the formal signal to commence with their plans to achieve these goals on behalf of the Irish people.

A conservative provision for a conservative time, the Eight Amendment was added to the Constitution of Ireland on 7 September 1983 having passed by 66.9% of the total vote. Since being introduced under the leadership of the Fianna Fail-Labour coalition government, the provision has received ever-growing social criticism in Ireland. Since its ratification, it is estimated that over 170,000 Irish women have travelled abroad to have abortions – England and Wales being the preferred destinations. It is also estimated that around 9 women travel daily to the UK from Ireland to seek safe and secure abortions in medically controlled environments. Whilst abortions are illegal on Irish soil, the right to travel abroad to secure abortions is not only permitted by law under the constitution but is written in the constitution.

In general, Irish politicians and successive governments have remained relatively conservative on the issue of abortion, either refusing to advance discourse and debate on the matter or addressing the issue with the intent to further strengthen the ban. In 2002, the Fianna Fail-Progressive Democrats coalition government led the Twenty-Fifth Amendment to the Constitution of Ireland Bill which aimed to remove the risk of suicide as grounds for abortion and to further strengthen criminal penalties for those who provide or receive abortions on Irish soil. In 1992, the Supreme Court ruled that abortions were permitted in the case of suicide following the infamous X Case. The 2002 referendum was rejected by a narrow 50.4%. Although indicative of some easing in social attitudes, the outcome still reflected the extent of conservative values toward abortion in Irish society in the early years of the 21st century.

Following the death of Savita Halappanavar in 2012 due to miscarriage induced septicaemia following an apparent abortion request, the pro-choice movement gained momentum across Ireland. This encouraged the Fine Gael-Labour Party coalition government to introduce the Protection of Life during Pregnancy Act in 2013. The act merely affords the 1992 Supreme Court ruling effect in statutory law. Given that the 1992 ruling failed to protect Savita, many today still express concerns toward the effectiveness of this bill and just how far it goes to guaranteeing – in practice – the rights of women to secure abortions in Ireland if pregnancy is a risk to their lives, or they are at risk of suicide. 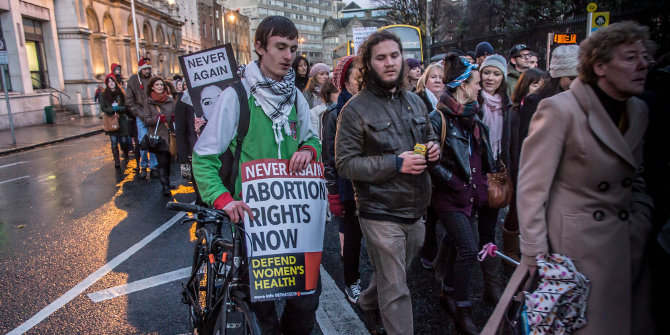 Recently, a young GP expressed on Irish national television that in accordance with his beliefs – and despite his professional obligation – he would refuse to refer a woman to another doctor if she sought advice on abortion. Such a confession from a medical practitioner doesn’t offer much hope or confidence in the Irish Healthcare system to make affective decisions on abortion under contemporary legislation – especially if medical doctors are hindered in carrying out their professional duties due to their personal beliefs and/or ideological biases on the issue. This leads one to question when exactly is risk to the life of the mother, or indeed suicide considered an adequate means for abortion, and are judgments made by medical professionals on these issues free from personal bias? One must also question if some doctors are prepared to carry out their professional duties in accordance with the law despite their personal beliefs.

Reflecting on the timeline of abortion legislation in Ireland, it was expected that the referendum campaign would be divisive. Abortion is a sensitive issue in Ireland and viewpoints pertaining to it cannot easily be reduced to matters of religion or personal sense of political ideology alone. This is one reason why the issue is so contentious and complex. Campaigners on both sides of the divide worked tirelessly to shape public opinion in anticipation of the upcoming referendum. At times the campaign became quite turbulent with criticisms toward the use of campaign imagery, the interpretation of fact, the quality of publicly distributed information and the style of public campaign tactics.

On the Pro-Life side, a key argument was that right to life of the unborn ought to be protected and upheld in tandem with the mother, as abortion is a threat to the life of a dependent living being who cannot defend itself. Additionally, the Pro-Life campaign argued that current protections for women under the Eight Amendment were adequate and satisfactory. On the Pro-Choice side, campaigners argued that liberalising abortion laws was merely about giving women the right to make the best decisions for themselves and their own bodies and to ensure that the State protects and upholds their rights to make those personal decisions, as well as offering them the greatest level of support and treatment under their own healthcare system.

Both sides had something quite valid to offer to the debate on abortion, and no doubt their efforts have contributed something constructive toward the shaping of Irish society going forward. Nevertheless, one may argue that regardless of one’s stance on abortion there was clear reason to suggest that Irish society had a lot more to lose from a No vote than it did from a Yes vote. A No vote would merely have perpetuated the cycle of women unfairly travelling abroad for abortions, which are not necessarily guaranteed, or even receiving inadequate support at home during crisis pregnancies, as well as the perpetuated social stigma, misconceptions and biases that would have continued to hinder a woman’s choice to make decisions about her own body. Alternatively, a Yes vote offered a solution to these complex matters and can only work to the benefit of women and women’s rights in modern Ireland.

Exit polls released on Friday night suggested that the Yes campaign could win with 69.4% of the total vote. Early tallies appeared to strengthen this prediction. It was clear by midday on Saturday that the Yes campaign had won by a landslide victory with many No side campaigners conceding defeat. Early polls suggested that voters across the country were greatly influenced by the personal stories of women mediated throughout the campaign, whilst personal relationships and experiences also had a significant influence on voter choice. There was little or no expression of the rural vs. urban divide.

The referendum result indicates a major shift in Irish society and social attitudes. The will of the people has spoken and there is a clear mandate for progressive change. The Irish government will now prepare to introduce legislation through the Oireachtas with hopes for full legal implementation by December 2018. Due to political constraints, it is likely that the legislation may be relatively conservative compared to abortion legislation enacted across Europe as inter-party compromise will have to be met. However, in repealing the Eight Amendment, the Irish government is now better empowered to work toward enhancing the rights of all women in Ireland and delivering to them the right to navigate their own lives based on their own choices during pregnancy.