Greece is due to exit its current bailout programme in August and key decisions on debt relief for the country are on the political agenda in Brussels. Caroline Bhattacharya explains that with a reduced majority and potential dissent from members of her own party over the issue, Angela Merkel could face a challenging time in the Bundestag over the coming months. 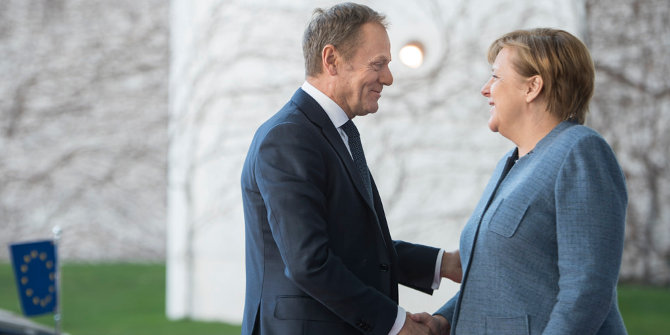 In recent weeks, something of an intra-party rebellion has been brewing among the German Christian Democrats over Greece. Backbenchers in the Bundestag could yet determine the future of both Greece and the Eurozone. Future Bundestag debates on Greece’s exit from the bailout programme, debt relief for Greece, or debt mutualisation as part of wider Eurozone reforms, are expected to be heated and the government majority could be put in jeopardy.

The last general election in Germany was followed by half a year of uncertainty – a feeling that is rare in German politics. In the end, Merkel got what she wanted: to head another so-called ‘grand coalition’ with the Social Democrats (SPD) for her last term as Chancellor. However, the share of seats held by Merkel’s Christian Democratic Union (CDU) and its Bavarian sister party, the Christian Social Union (CSU), has decreased from 49 per cent to 35 per cent. More strikingly, government MPs now hold only 399 of 709 seats (56 per cent) compared to 504 of 631 seats (80 per cent) in the previous term.

Germany is characterised by high levels of political stability, and research has shown that voting unity has traditionally been very high within all parties in the Bundestag. Thus, a narrow government majority is not necessarily an issue of immediate concern. But those who were hoping for a positive response from Berlin regarding the reform proposals for the European Union made by French president Emmanuel Macron should be particularly worried about the political situation.

Although the coalition agreement contains vague commitments to increasing the EU budget and reforming the Eurozone while adhering to the Stability and Growth Pact, it is necessary to have realistic expectations. With Martin Schulz, former president of the European Parliament, stepping down as party leader, the SPD is unlikely to prioritise European integration and push for substantial reforms. Without any pressure from the Social Democrats, Merkel has no reason to join Macron at the steering wheel. For the sake of peace within her party, she will be happy to take a backseat, and could yet apply the brakes to Macron’s reform initiative.

The Greek crisis as a test of party unity

One lesson from the last few years has been that party unity can be a fragile thing when transnational issues come to shape the domestic political agenda. The Greek sovereign debt crisis was a clear demonstration of this, with the crisis creating new lines of division within established mainstream parties. It is no coincidence that conservative parties with a centrist position on European integration are particularly susceptible to internal dissent, since they support economic integration while simultaneously defending national sovereignty against further political integration and the nation state against the socio-cultural effects of transnationalism. This tension is undoubtedly present in the German Christian Democrats.

Between 2010 and 2015, the Bundestag passed twelve acts related to measures for resolving the Eurozone crisis, and five of those votes concerned aid packages for Greece. As illustrated in Figure 1, over the course of the crisis, voting unity dropped to levels well below average for all parties at some stage. This disintegration of the pro-European consensus reached a high watermark in 2015, when the second aid package for Greece was extended and the third package was negotiated and passed. While the Social Democrats became more united after joining the government in October 2013, intra-party dissent among the Christian Democrats grew with each vote regarding Greece. In August 2015, more than one in five CDU/CSU delegates diverged from the party line by not supporting the third aid package. This is contrary to the general tendencies in the Bundestag, as we would expect voting unity to be highest in the CDU and CSU.

Figure 1: Agreement index for roll-call votes on Eurozone crisis measures compared to average levels during the 2005–2009 term (click to enlarge) 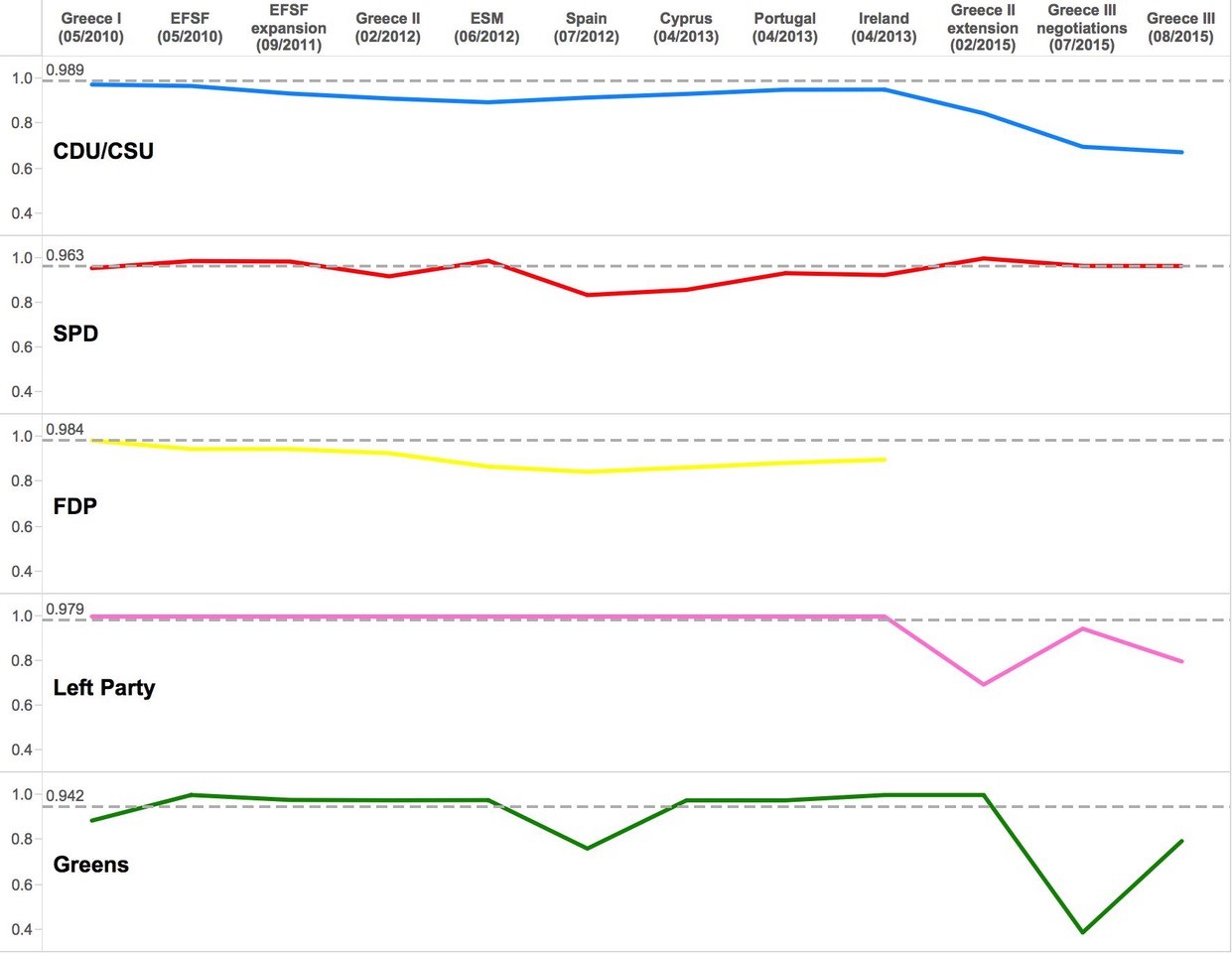 Note: Agreement index is based on Hix et al. 2003 and average levels for party groups are derived from the work of Bergmann et al. (2016)

The Bundestag provides three significant channels of public expression for MPs who want to get their voices heard: giving a speech in the plenary, voting (in a roll-call vote), and delivering an ‘explanation of vote’, which are used to provide justification for a voting decision or to voice reservations.

The level of disagreement with the party leadership determines which action an MP chooses: defecting in a whipped vote is the most radical display of defiance (besides leaving the party), whereas, in theory, speeches offer an outlet for lesser disagreement. In the Bundestag, however, party leaders decide who gets to speak on behalf of the party and for how long. Previous research has shown that in highly salient debates, German party leaders are more likely to speak themselves and MPs who are ideologically distant from the leadership tend to give fewer speeches (whereas the opposite is the case in the UK House of Commons).

Joint research with my colleague Achillefs Papageorgiou confirms that the debates on the Greek crisis were dominated by a small number of party leaders and other experienced frontbenchers sticking to the party line. Hence, the plenary debates did not reflect the growing controversy over the issue and the disintegration of the pro-European consensus within – rather than between – legislative parties. From the patterns of voting behaviour, we observe that rank and experience are significant predictors for defection, and in line with earlier research, their combined effect is even stronger: Experienced MPs who sit on the backbenches, either because they have been demoted or never held office in the first place, are the most likely to defect. Among the Christian Democrats, we also see that the vast majority of dissidents (64 out of 66) are MPs who have been elected from single-member districts (as opposed to closed party lists).

We also examine the usage of ‘explanations of votes’ and find that, despite their limited public visibility, they provide a worthwhile channel of communication for rank-and-file MPs, newcomers and list MPs. Also, women MPs, who are underrepresented in ‘hard’ policy debates like this one, are more inclined to explain their voting decision than their male colleagues. These groups of legislators may lack access to the plenary floor, find the threshold of defection too high and/or have more to lose, as, for example, list MPs are more dependent on their party leadership for re-election.

Most interestingly, we reveal some sequential dynamics between legislative activities: an MP who defected in one vote is much more likely (11 times) to cast a deviant vote the next time, whereas MPs are less likely to explain their voting decision if they have done so in the previous debate. An MP who delivered an ‘explanation of vote’ in the past does not appear to have a strong motivation to invest limited resources to explain his/her decision again if their opinion on the issue has remained unchanged. What is even more intriguing, an MP who has explained their voting decision is two times more likely to vote against the party line in a future vote. In other words, ‘explanations of votes’ are a first step towards defection and can function as a ‘warning’ mechanism for party leaderships.

Over the years, Greece’s creditors have promised to lighten the country’s debt load (e.g. by further extending the repayment periods or cutting the interest rates) on condition of reform efforts. As a result of drastic austerity measures and tax increases, Greece has been running a primary budget surplus for two consecutive years. In August 2018, the third bailout programme will end, and it is time for the Eurozone countries and the International Monetary Fund to keep up their promises.

In the past, Germany has opposed substantive debt relief and only reluctantly agreed to extending repayment periods and lowering the interest rates. Although the new finance minister, Olaf Scholz, a Social Democrat, is believed to be more flexible than his predecessor, Christian Democrat Wolfgang Schäuble, the domestic hostility to debt relief and fear of a ‘transfer union’ has certainly not decreased – quite the opposite. As the Eurogroup continues talks on whether Greece will need debt relief after exiting the bailout programme and whether this potential debt relief includes a ‘growth adjustment mechanism’ that links repayments to Greece’s economic growth rate, it is unclear how Merkel can convince her conservative backbenchers.

We also need to remember that the Alternative for Germany (AfD), now most known for their anti-immigration agenda, started out as a single-issue party campaigning for Germany‘s exit from the common currency. The Free Democrats, who are in favour of Greece’s exit from the Eurozone, have also re-entered the Bundestag. Hence, inter-party competition on the Greek question and other EU issues will intensify. The CDU/CSU will have to close ranks again and tighten the thumbscrews on dissenters to toe the party line.

What does this mean for future votes? Let us do the maths: 46 out of the 66 dissenters from 2015 are still in the Bundestag. (14 of the remaining MPs retired and six were not re-elected.) If they were all to adhere to their previous stance and oppose further financial support for Greece or concessions, for instance, in the form of a ‘haircut’ (i.e. a debt write-off), the government majority would shrink to only one seat.

The government majority could even be put in jeopardy, as two Social Democrats who defected in 2015 have been re-elected, and ten more MPs from the governing coalition issued an individual ‘explanation of vote’ in the last vote on Greece, an indication for potential defection in the future. Our research suggests that once an MP has crossed the threshold of defection accepting potential sanctions, they are highly likely to defect in a future vote, especially since the issue has become increasingly controversial (with public opinion largely against support for Greece), while the government’s official position has remained unaltered.

Although the majority could potentially be saved by the Greens, the question remains whether the prospect of a public embarrassment of the Chancellor and the Finance Minister would be enough for party rebels to change their voting behaviour. What other incentive would they have? As they have defected in the past, they have either already faced sanctions or did not experience any negative consequences for their disloyalty. In fact, the majority of them outperformed their party in the elections. On average, they received 0.64 per cent more votes compared to all Christian Democratic candidates collectively in their respective federal state. (In the 2013 elections, the much smaller group of 13 dissenters outperformed the party by 0.8 per cent on average.)

Caroline Bhattacharya – University of Helsinki
Caroline Bhattacharya is a PhD candidate at the Department of Political and Economic Studies, University of Helsinki. In her dissertation she analyses the concurrent contestation and decontestation of the euro crisis in the German Bundestag. Her project is funded by the Finnish Cultural Foundation. She tweets @CarolineBha