Although Polish rock star-politician Paweł Kukiz’s political grouping is an unstable construct, lacking organisational and programmatic coherence, it remains the Polish government’s only potential coalition partner and could still emerge as king-maker after the country’s next parliamentary election. Aleks Szczerbiak explains that the key to its survival and future success is still Mr Kukiz’s continued credibility as an ‘anti-system’ fighter against the political establishment. 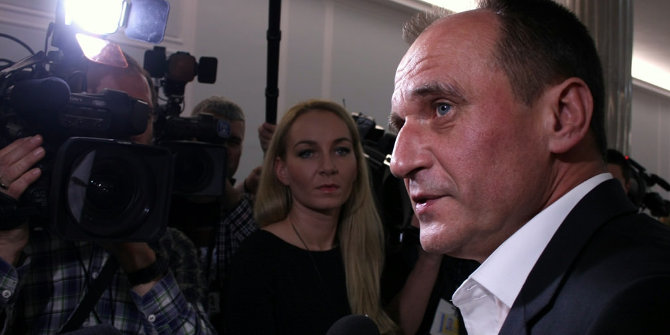 Three years ago, rock star and social activist Paweł Kukiz caused a political sensation when he finished third in the first round of the May 2015 Polish presidential election, picking up more than one fifth of the vote. Standing as an independent right-wing ‘anti-system’ candidate, Mr Kukiz’s signature issue, and main focus of his earlier social activism, was strong support for the replacement of Poland’s current list-based proportional electoral system with UK-style single-member constituencies (known by the Polish acronym ‘JOW’), which he saw as the key to renewing politics. Then, in spite of running a poor campaign, his newly-formed Kukiz ’15 grouping emerged as the third largest following the October 2015 parliamentary election, securing 8.8% of the vote and 42 seats in the 460-member Sejm, the more powerful lower chamber of the Polish parliament.

Not surprisingly, therefore, Mr Kukiz’s grouping has struggled to develop a distinctive political identity, particularly given that the Polish political scene has become highly polarised since the 2015 elections between supporters of the government, led by the right-wing Law and Justice (PiS) party, and the liberal-centrist (so-called ‘total’) opposition. While its supporters appear divided in their attitudes towards the Law and Justice government, Kukiz ’15 has tried to position itself as a ‘constructive’ opposition. Consequently, for a long time Mr Kukiz was the only opposition politician to maintain regular contacts with Law and Justice leader Jarosław Kaczyński – who, although he does not hold any formal state positions, exercises a powerful behind-the-scenes influence in determining the government’s programmatic and strategic priorities.

Mr Kukiz’s grouping also tried not to become directly involved in the bitter, ongoing conflicts between Law and Justice and the liberal-centrist opposition over constitutional issues. While often criticising the government’s handling of these disputes, Kukiz ‘15 refused to join other opposition groupings in street protests organised by the anti-government Committee for the Defence of Democracy (KOD), leading to accusations that it was Law and Justice’s informal coalition partner. Kukiz ’15 also strongly opposed moves by the European Commission to invoke the so-called Article 7 ‘rule of law’ procedure against the Polish government, and, tapping into widespread popular concerns about the potential security and societal cohesion risks posed by mass Muslim migration, backed Law and Justice in its vehement opposition to Poland being obliged to accept migrants from the Middle East and North Africa under the EU’s compulsory relocation scheme.

Strained relations with the ruling party

However, over time Kukiz ’15 has become increasingly critical of the Law and Justice government. It has continued to try and position itself as the most genuinely reformist ‘anti-system’ political grouping by, for example, promoting more direct democracy and referendums triggered by civic initiatives. In some respects, Kukiz ’15 has also developed into one of the most pro-free market groupings currently represented in parliament, criticising what it sees as excessive business and economic regulation by state officials. At the end of last year, it clashed bitterly with Law and Justice when the government proposed an amendment to the local election law abolishing single-member constituencies (Kukiz ‘15’s signature issue) in councils covering more than 20,000 residents. Kukiz ‘15’s harshest criticisms, however, have been of party-linked appointments to state bodies and what it argues are the continued privileges enjoyed by state officials and political elites under the Law and Justice administration, as part of a broader critique of the phenomenon that it refers to as ‘partocracy’.

Last summer, Mr Kukiz also attempted to develop a political alliance with Poland’s Law and Justice-backed President Andrzej Duda after the latter vetoed two of the government’s flagship judicial reform laws in July. Mr Kukiz tried to present these vetoes as a major political success for his grouping. However, the judicial reform bills were eventually passed in a modified form with Mr Duda’s support, and nothing materialised from speculation that Mr Kukiz could play a key role in attempts to build a new ‘presidential’ political party, other than a further deterioration of the rock star-politician’s relations with the ruling party.

Maintaining a stable base of support

The only common denominator uniting Kukiz ’15’s disparate ideological tendencies appeared to be their opposition to the constitutional foundations of the post-1989 Polish state and its dominant elites, together with a vague ‘anti-systemness’ that Mr Kukiz was felt to embody. This led many commentators to predict that the grouping would implode as soon as it was forced to confront issues that brought its ideological incoherence to the fore. For sure, 14 deputies have left the Kukiz ‘15 parliamentary caucus since the election, six of whom formed the ‘Free and Solidaristic’ (WiS) parliamentary circle led by legendary former anti-communist activist Kornel Morawiecki. Mr Morawiecki was elected on the Kukiz ’15 ticket but is now a strong supporter of the government; not surprisingly, given that his son Mariusz has been Law and Justice prime minister since last December and was previously deputy prime minister responsible for economic affairs. However, partly because it has been prepared to tolerate a relative lack of parliamentary voting discipline, the Kukiz ’15 caucus has not disintegrated and is still the third largest with 29 members.

Moreover, opinion polls suggest that Kukiz ‘15 has actually maintained a reasonably stable electoral base: the ‘Pooling the Poles’ blog that aggregates voting intention surveys currently shows the grouping averaging around 8% support. In spite of the fact that Mr Kukiz has not really come up with any new ideas or initiatives, and his grouping can point to very few substantive political achievements since the election (apart from securing a few nominees on public broadcasting and judicial supervisory bodies), a substantial bloc of voters clearly still feels that Mr Kukiz has remained true to his ‘anti-system’ principles and is the most credible opponent of the political establishment. This widespread anti-establishment feeling is particularly (although not exclusively) evident among younger voters: an August-September 2017 survey conducted by the CBOS polling agency, for example, found that 56% of Kukiz ‘15 voters were in the 18-35 age category (which comprises only 25% of the electorate as a whole) and 20% of them were under 25 (7% of the electorate). Many of these younger voters originally supported Mr Kukiz because they became increasingly disillusioned with a status quo that appeared to offer them an invidious choice between moving abroad to take jobs that fell well short of their abilities or remaining in a country which they felt offered them few prospects for the future. Three years later, many of them still do not identify with either Law and Justice or the liberal-centrist opposition.

A pivotal role in the future?

Indeed, Kukiz ’15 could still play a pivotal role in Polish politics because it is currently Law and Justice’s only realistic potential coalition partner if the ruling party should fail to secure an outright majority at the next parliamentary election, scheduled for autumn 2019. This is quite likely: had the United Left (ZL) electoral coalition won only 0.4% more of the votes at the 2015 election then it would have crossed the parliamentary representation threshold and thereby deprived Law and Justice of its majority. The same scenario could also play out after this autumn’s local elections in many of Poland’s 16 regional assemblies, the only local government tier contested on national party lines. Although in the previous 2014 local polls Law and Justice won the largest share of the vote in half of these regional authorities, because of its weak coalition potential it was only able to secure control of one of them: Podkarpackie province, where the party won an outright majority of council seats. Without the backing of Kukiz ’15, therefore, Law and Justice could once again fail to take a control of regional authorities even where it wins the largest number of seats.

The problem for Kukiz ’15 is that council elections, because they require political groupings to stand thousands of local candidates, favour established parties with well-developed grassroots organisational structures. Kukiz ’15 has failed to build up such networks and its leader fell out with many of the local government and civic activists who formed the backbone of his 2015 presidential election campaign, so it has had to advertise for candidates on the Internet. This is exacerbated by the fact that Kukiz ’15 did not register as a formal political party, thereby making it ineligible for ongoing state funding; a decision which, given its vote share at the last election, has cost the grouping around 7 million złoties per annum. Kukiz ’15’s objectives for these local elections are, therefore, fairly modest: crossing the 5% threshold (which political groupings require to secure parliamentary representation nationally) in the aggregated nationwide share of the regional council vote; and achieving at least some minor, symbolic victories in local mayoral elections.

Kukiz ’15 remains an unstable political construct and the grouping’s lack of organisational and programmatic coherence, together with its socially and ideologically heterogeneous electoral base, casts serious doubts over its future prospects. Since the collapse of communism in 1989, Poland has seen a series of ‘anti-system’ parties emerge, some winning as much as 10% of the vote, only to then fizzle out and disappear. Kukiz ’15 could easily end up as simply the latest, transitory repository of such protest votes. At the same time, however, there is also a good chance that Mr Kukiz’s grouping will survive to contest the next parliamentary election and possibly even emerge as the king-maker in the new parliament. Although Mr Kukiz’s apparent unpredictability and shifting political allegiances may have put Law and Justice off the idea of working with him as a coalition partner, Mr Kaczyński’s party may not have any choice if it wants to secure control of a significant number of regional authorities after the autumn local elections, or remain in government after the next parliamentary poll.

In fact, the key to Kukiz ‘15’s continued political success, and even survival, remains its leader’s personal credibility and popularity. Surveys conducted by CBOS have consistently found Mr Kukiz to be among Poland’s top three or four most popular politicians: in May he secured a 50% approval rating (20% disapproval), way ahead of any other opposition leaders. Although he can be gaffe-prone and react emotionally under pressure, Mr Kukiz’s impulsive behaviour outside of established political norms – which would be fatal for more mainstream politicians – is viewed by many of his supporters as evidence of his authenticity. This support could erode very quickly if they cease to see him as the most credible fighter against ‘the system’ but, for the moment, his supporters seem to be willing to give Kukiz ’15 the benefit of the doubt, and back the grouping as long as they continue to view its leader as the embodiment of opposition to the Polish political establishment.

Note: This article originally appeared at Aleks Szczerbiak’s personal blog. The article gives the views of the author, not the position of EUROPP – European Politics and Policy or the London School of Economics.

Aleks Szczerbiak – University of Sussex
Aleks Szczerbiak is Professor of Politics and Contemporary European Studies at the University of Sussex. He is author of Poland Within the European Union? New Awkward Partner or New Heart of Europe?(Routledge, 2012) and ‘Politicising the Communist Past: The Politics of Truth Revelation in Post-Communist Poland‘ (Routledge 2018). He blogs regularly about developments on the Polish political scene at http://polishpoliticsblog.wordpress.com/ 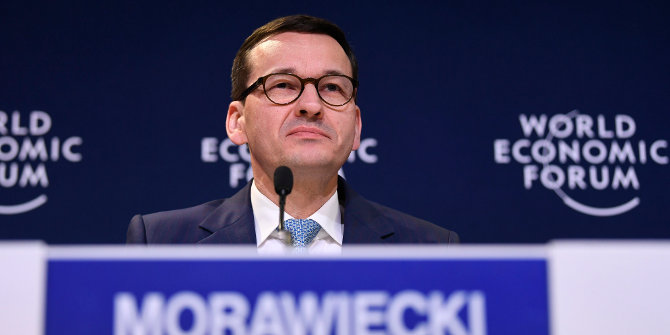 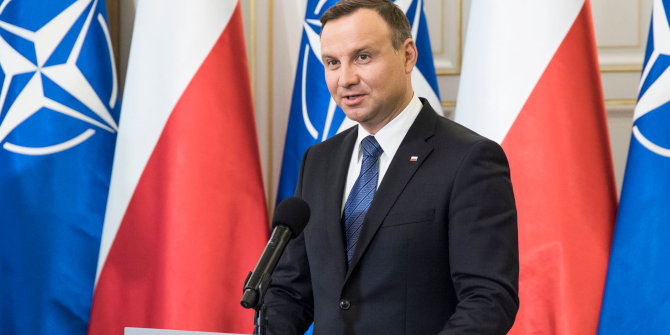 The Congress of the New Right is the latest anti-establishment party to have success in Poland, but it may struggle to secure long-term support