Do populist parties behave differently from other parties when they enter parliament? Presenting evidence from a study of parties in the Netherlands, Simon Otjes and Tom Louwerse illustrate that both left-wing and right-wing populist parties tend to primarily voice opposition rather than offer policy alternatives. The growing representation of populist parties in West European parliaments is therefore likely to lead to an increase in confrontational politics focused on scrutiny rather than policy-making.

Populist political parties form an important part of the political landscape of West-European democracies. Recently we have seen a number of populist parties, like the Austrian Freedom Party and the Italian Five Star Movement enter government. These parties have been in parliament for years. Yet, we know surprisingly little about how they operate in parliament. Do they have a preference for particular political tools or strategies? Does their populism feed into their parliamentary behaviour? In a recent study we examined this by looking at the Netherlands.

At the core of our paper is a simple typology of parliamentary opposition activity. There are two ways Members of Parliament (MPs) can operate. First, they can attempt to use the legislative arena to change policy. MPs can initiate new legislation or they can propose to amend the text of that bill. They can also propose parliamentary motions to get the minister to change policies or propose bills. We call this kind of behaviour “Policy-Making Activity”.

Alternatively, they can voice their opposition to the government and its policies. They can do so by asking questions to a minister. Such questions are often an opportunity to draw attention to a policy failure or direct attention to an issue that a minister has ignored. Many parliaments have the option to ask written questions and the option for a limited number of oral questions in parliament. Another way to voice criticism is by voting against government bills. We call all this kind of activity “Scrutiny Activity”.

We expect populist parties to be concentrated in the critical quadrant. We follow the consensus in the literature that conceives of populism in terms of two claims: first that the actions of the government should reflect the general will of the people and second that the ruling elite deprives the people of their right to rule. Anti-elitism is an important element in populism for our study. We propose that this factor makes them more likely to prefer scrutiny tools to policy-making tools. If an opposition party wants to influence policy-making it needs to make compromises with the ruling parties. We expect populist parties not to want to engage in this. Instead we propose that populist parties are likely to use scrutiny tools to criticise the government but also to draw attention to issues that the government neglects.

Figure: Parliamentary behaviour by political parties in the Netherlands 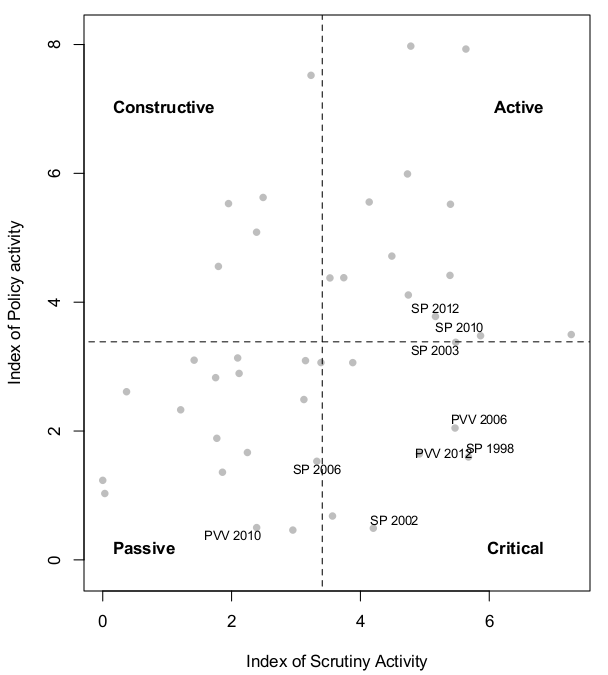 The figure above quickly summarises our results. It places all Dutch political parties in the two-by-two figure. The Socialist Party and the Freedom Party are labelled. We can see that in general most populist parties are in the lower right corner. Here we find both the left-wing Socialist Party and the Freedom Party. This conforms to our expectations: populist parties voice opposition rather than offer alternatives. In our detailed statistical analysis, we find that the relationship between populism and the policy-making dimension is stronger than the relationship between populism and the scrutiny dimension.

Note: This article gives the views of the authors, not the position of EUROPP – European Politics and Policy or the London School of Economics. Featured image credit: Tweede Kamer