Romania has experienced large anti-government protests on multiple occasions in the last few years, most recently in August this year. Yet as Daniel Brett explains, the achievements of these protests have been modest and short-lived, with the country’s ruling Social Democratic Party still maintaining power. He highlights that while the protesters and opposition parties may be united in their opposition to corruption, they have radically different views on social and economic issues, hampering their ability to change the direction of Romanian politics.

In late August, 150,000 people took to the streets of Romania to protest against the latest moves by the government to weaken anti-corruption legislation and its increasing authoritarianism. The protests were spearheaded by the Romanian diaspora, many of whom returned home to take part. This represented the latest in a series of confrontations over the last few years between the Romanian elite and the people. Such protests and mass mobilisations have grown in recent years either in response to political crises such as the gold mining project at Rosia Montana, the Colectiv Fire, and the country’s hospital disinfectant scandal, or to attempts by the governing Social Democratic Party (PSD) to make power-grabs or unpick anti-corruption legislation.

The protests are often described by headline writers as ‘Romania finally getting its revolution’ and they are frequently presented as the moment that will finally break the dam. However, Romania is still waiting on its revolution. It is therefore worth asking if the protests have achieved anything substantial or whether they have simply served to delay the PSD’s consolidation of its hold on power and its successful unpicking of anti-corruption legislation.

For instance, why was the PSD, after resigning in disgrace following the Colectiv Fire and subsequent protests, able to sweep back into power in local and parliamentary elections within a year? Why have public mobilisations been successful in the short term in stopping the PSD and their allies from pursuing their most confrontational policies, but unsuccessful in sustaining themselves or preventing the slower erosion of anti-corruption measures in Romania. And why have anticipated new political movements failed to emerge or make headway in elections?

One might wonder whether Romania is simply stuck in a rinse and repeat cycle. Indeed, as Dennis Deletant has argued in a previous EUROPP article, there is a wider malaise in Romanian society and this is reflected in the ineffectiveness of the protest movements to effect substantive long lasting changes in Romanian life.

On the one hand, the protests can be seen as reflecting all sections of society and politics. The left, the centre and the right can and do protest against the PSD. This is the greatest strength and also the greatest weakness of the protesters. Although the headline issues are corruption and democracy, there are two critical faultlines within the protest movement: the first is around social political issues and the second is on economic issues. This gives some insight into the problems facing those who oppose the PSD.

There is a deep division in Romanian society around social issues and this has been effectively exploited by the PSD and their allies to divide their opponents. The issue of same sex marriage and LGBTI rights is deeply contentious. The PSD and their allies in parliament have aligned themselves with the Orthodox Church in attempting to change the constitution to ban same sex marriage and organise a referendum to this effect. There are many within the left and liberal centre of the protest movements who oppose this and want to see greater rights not just for sexual minorities but also gender rights and protections for ethnic minorities. Thus, the protests are not purely about corruption but also a wider rejection of the political and social order and a desire to see a different kind of Romania, not just politically but also socially.

On the other hand, at protests there are often members of the ultras from the local football clubs who tend to be nationalistic, if not racist and intolerant. There are also many ordinary Romanians present at protests who are socially conservative and nationalistic but are simply opposed to corruption. Chauvinistic nationalism is a legacy of the nationalism that Ceaușescu used to attempt to legitimise his regime. This nationalism was maintained by the National Salvation Front (NSF) after the revolution of 1989 and has remained part of the discursive arsenal deployed by the NSF’s successors (primarily the PSD). It is therefore relatively easy for the authorities and their supporters in the media to label the protesters as both fascists and as a front for same sex rights. 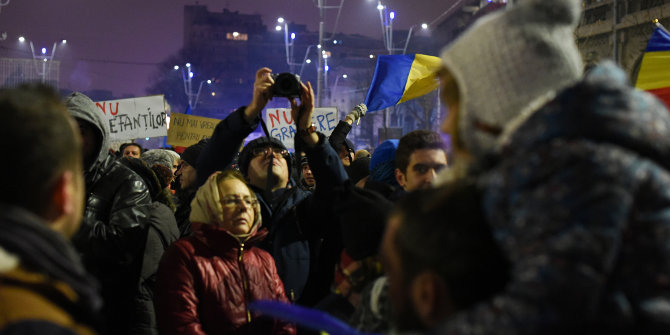 The social liberal opposition faces a problem as they need to draw votes from the PSD and their allies to be elected. To do this they have to work with those who are socially conservative and in particular deal with the thorny issue of the Orthodox Church. Actors feel it is necessary to water down their social liberalism or to temper their criticism of the church’s tax status and use of state money. The problem is that the polarisation is so deep that these compromises are seen as selling out. And the inability to bridge this divide means there is a gap between a socially liberal group of protesters and the more socially conservative protesters which prevents any kind of coherent or sustainable social agenda emerging out of the protests.

The second fault line prevents the emergence of a cohesive socially liberal movement. Social liberals are divided over the direction of the Romanian economy. Corruption is at the heart of explanations about the dysfunction of the economy, but while some see corruption as contributing to increasing inequality, others see it as hampering the development of a functioning free market economy. Those who are concerned about inequality are concerned about the anti-corruption protests being captured by neoliberal middle class voices that have no interest in inequality and poverty.

This mistrust is probably justified. As Cornel Ban has shown, neoliberalism is deeply embedded within the Romanian elite and all political parties adhere to it, in particular the shrinking of the state – so much so that when advised by the IMF and World Bank that Romania had economic capacity to engage in extensive poverty reduction, the response of the Romanians was to declare that ‘poverty was a lifestyle choice.’ The neoliberal M10 party, led by former justice minister and anti-corruption advocate Monica Macovei, argues that healthcare is a ‘service not a right’. So, while there may be agreement on social issues, the divisions over the economy are every bit as deep.

Urban vs rural? A dialogue of the deaf?

Although two new parties have emerged since the Colectiv Fire – the centre right USR and the left wing Demos – these two parties, as with the protest movements, face the problem of getting their message to the people given a majority of the most popular Romanian media are sympathetic to the PSD and their allies. They are seen as being essentially urban movements: one of the darker sides to the protests has been the tendency to mock pro-PSD supporters at counter-protests as ‘elderly, stupid and rural’. However, reaching out to Romanians living in the countryside and provincial towns and getting them to support change is going to be critical.

Although Alina Mungiu may argue that ‘seven million peasants, who barely reach subsistence levels, have no idea of the difference between the political right and left’ this does rural voters a huge disservice. Given the lack of interest by urban elites in the countryside, it is little wonder that rural voters respond to the peanuts that the PSD throws to them because something is better than nothing. And yet, the protesters and the opposition parties in Romania lack a coherent plan to offer something concrete to voters on the social and economic margins who are facing up to crumbling social and physical infrastructure. Nor is there any real attempt to explain how corruption, graft and authoritarianism contribute to declining quality of life in the countryside.

Until there is a genuine electoral threat to attract traditional PSD voters away from the party at local and parliamentary elections, the PSD will remain politically dominant and able to ignore the protesters on the streets. The divisions within the protesters and the gap between them and the rest of the country show that a genuine, coherent, and broad-based opposition to the PSD does not exist. While people will coalesce for a short while around critical issues, the tensions between factions means the protests quickly wither away until the next crisis.

Romania’s politics on fire: Why Victor Ponta resigned and what it means for the country