Does the nation state have a future in Europe? Joan Costa Font writes that several developments in European politics, including mobility/migration, weakening national identities, and the rise of regional secessionist movements should prompt a reassessment of what a nation state is in modern Europe. He suggests a clear separation is needed between national cultures, which should be opted into voluntarily, and the ‘state’, which provides public goods like healthcare and welfare.

A so called ‘cosmopolitan polity’ would be one in which citizens from different countries interact on an equal footing, with ‘nationality meaning only a place of birth’. The European Union is currently a collection of distinct nation states, but is it possible that it could one day transform into a genuine cosmopolitan polity?

To date, most states are multinational in a cultural sense: either they have regional minorities, a significant share of individuals that were born elsewhere, or simply, there is a growing differential sentiment towards the nation, that deviates from its classical attachments.

Although, on paper, the European Union is a cooperative agreement of nation states, if reform takes place accordingly, it can be argued that its configuration contains the seeds of a more ambitious endeavour of building a cosmopolitan federation (for instance, sharing a common currency is an example of states giving up their policy instruments, inevitably followed by a fiscal union to avoid continuous crises).

In such terms, Brexit can be defined as a reactionary move to what many see as the inevitable emergence of a post-national European polity. Similarly, other movements such as that associated with Marine Le Pen in France, or the Polish, Italian and Hungarian governments, are other manifestations of the same phenomena.

In addition to these and similar phenomena, it’s worth pointing out that nationalism is very present in our daily lives in nation states which are not run, on paper at least, by reactionaries (take the Spanish claims over Gibraltar, which ignore similar claims form Morocco on two cities). This is in part because European member states have not renewed the old narrative of the nation, which is clearly at odds with the transformation that Europe is experiencing, giving rise to the need to redefine the concept as a distinction between patriotism and nationalism, as the French President Emmanuel Macron recently highlighted. However, such a distinction is far from convincing, and has been criticised. The spirit of Macron’s patriotism would have to be linked to a wider attachment than the nation, which inevitably is by definition more restrictive.

There are three main drivers of Europe’s redefinitions: territorial mobility or migration, disenchantment with the nation, and finally, regional secessionism. Territorial mobility and migration challenges the narrative of the nation state as a stable concept. The internal mobility of citizens within the EU is facing resistance in many European countries, as the old narrative of the nation is still alive. But in a post national Europe, such a reaction would be like Londoners complaining about excessive migration from Yorkshire.

The difference is that newcomers do not really identify with the nation state of residence in the same way as natives do. In contrast, people who do not live in their country of residence are now more likely to identify with Europe instead. Their view of the national state of residence is mainly instrumental: it provides them with some rights (such as EU citizenship or access to schooling, health care and welfare) which they might lack in their country of origin if they are not originally from an EU country.

In addition to newcomers, in several EU member states, many groups do not fully accept the narrative of the national state and identify with ‘wider identities’ from which Europe is one of them. Others simply consider themselves internationalists. This is in part the result of mobility and increasing contact between individuals from different European countries (e.g. caregivers of old age seniors in many countries are migrants). When travelling overseas, outside Europe, one gets constant reminders of our European origins, and in contrast, our national citizenship is often a marginal detail. If globalisation is increasing the travel opportunities for all social groups, it is only a matter of time that new identities such as these will emerge.

Finally, many European nation states are de facto multinational, even though they are not recognised as such, and in many cases such national groups are attempting to split from their national state (e.g. Scotland in the UK, Catalonia and the Basque Country in Spain, Flanders in Belgium, Transylvania in Romania, Corsica in France). In such states the majority of the population identifies with some specific and mainstream national culture, but minority national groups don’t. They regard the national culture as imposed on them or as the culture of the ‘state’ rather than their ‘nation’. Although regional secessionists are often disregarded as ‘nationalist’ by national state elites, their viability depends heavily on the unfolding of the European project as I have argued elsewhere.

The three challenges of mobility, disenchantment and the potential split of national states in Europe are at risk of pushing the nation state to its limits, calling into question their legitimacy. The nation is what economists call a ‘club good’ that has obvious advantages for its members, but no major advantages for those who are not. Given that not everyone benefits from mainstream national culture, and that such national culture might be perceived as oppressive by some, one option is to ‘privatise’ the nation and disassociate it from the state.

This means that groups of individuals who do not identify with the mainstream national culture would be allowed to opt out from both the membership and financial maintenance of national cultures. I would contend that we should extend Germany’s approach to religious affiliations (individuals that express membership of a religious group pay extra taxes to their church) to national communities. That is, if individuals identify as French, Italian or Catalonian, they should be registered as such and contribute on a voluntary basis to their communities while leaving the rest neutral.

National festivities linked to patriotic achievements should be voluntary, and computed as ‘days off work’ as opposed to bank holidays. Imposing a national culture, and its associated claims, seems at odds with the spirit of European integration. ‘Unity and diversity’ should not merely be a principle for Europe to subscribe to, but for national states, too. In fact, previous studies have found that despite decades of economic integration and convergence, Europeans have not become more similar in their deep cultural traits, and this is due to within-country heterogeneity in cultural differences (e.g. the North of Italy is closer to the European core than mainland France).

A solution to this is revisiting cultural fundamentals, which would reduce the potential for elite actors in national states to instrumentalise culture in the pursuit of their own national goals. In this way, communities that are able to form an attractive narrative will grow in membership and will endure. This provides an out of the box arrangement for disassociating the nation and the state. It offers a better alternative to federalism, secessionism and especially the nationalist approach to a centralised nation state. In such a setting, individuals are not forced to contribute to the culture of the country of residence, but only to the provision of public goods provided by a European federation and its member states. Claims of culture are restricted to the private affairs of communities, rather than the public affair of the state, which in turn has to become a much more flexible institution to adjust to multicultural society.

In a non-national sate, the European Union would have to accept English as the instrumental lingua franca. It would also have to be more flexible with cultural goods such as languages and representation as they are private clubs, as opposed to symbols of a state. Education systems would have to stop ‘civilising’ individuals into being good ‘nationals’, or ‘patriots’ (in Macron’s terminology), and focus on providing a non-national narrative to their pupils instead. As some of my previous work shows, the resulting expansion of a European identity would likely increase the preferences of citizens for re-distribution and solidarity. Individuals would be closer to the ideal of ‘cosmopolitan patriots’. Disentangling the nation from the state seems, in my view, a key development for Europe to focus on to make sure a European polity becomes a reality sooner rather than later.

In short, many nation states hold on to a national narrative that has little to do with the reality of its citizens’ affiliations and views. I have argued that migration and intra-European mobility, territorial secessionist claims and the penetration of non-nationalist views of life call for the privatisation of the nation and its disassociation from the concept of the state, which should focus on delivering public goods, rather than meddling with the historical grievances of the old national era.

Note: This article gives the views of the author, not the position of EUROPP – European Politics and Policy or the London School of Economics. Featured image credit: The Social Atlas of Europe 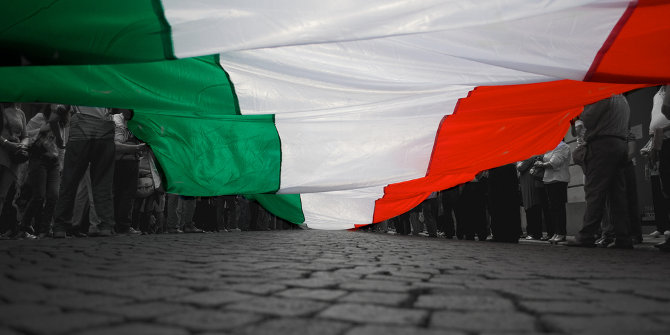