The decision to change the name of Macedonia to ‘North Macedonia’ brought an end to a protracted bilateral disagreement between the country and Greece. Zoran Nechev and Adnan Ćerimagić write that the experience offers a rare lesson in how the will to compromise and build peaceful cooperation can overcome entrenched disputes.

On 27 November 2016, then Macedonian ruling party VMRO-DPMNE, led by Nikola Gruevski, held an election campaign rally in Skopje. Their special guest was Sebastian Kurz, then Austria’s minister for foreign and European affairs. Kurz told the crowd that he “is very happy that Macedonia is on a good path towards the European Union.”

The reality of Macedonia and its EU path, however, could not have been more different. At that moment, the unresolved bilateral issue with Greece over the country’s name had stood in the way of Macedonia’s EU accession for eleven years and of NATO accession for eight years. Both sides were engaged in a spiral of endless rounds of provocation that bordered on the absurd. Nationalists on both sides used anger to provoke and increase frustrations among citizens. All attempts to build confidence were politically dishonest and mediation under UN auspices was de facto suspended. 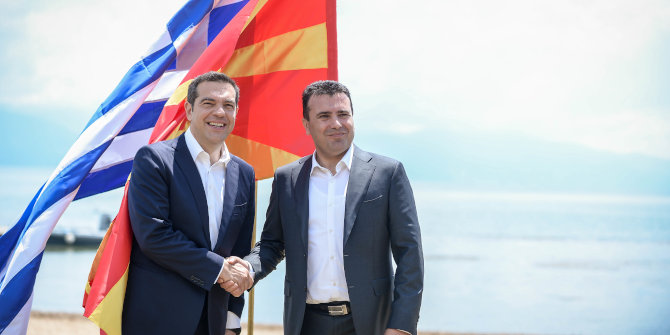 These bilateral issues aside, Macedonians had even bigger internal problems. The 2018 European Commission regular report published earlier that year noted that Macedonia was faced with ‘the continuation of the most severe political crisis since 2001’. In 2001, the country had faced a dramatic outburst of inter-ethnic violence. The report concluded that in recent years ‘democracy and rule of law have been constantly challenged, in particular due to state capture affecting the functioning of democratic institutions and key areas of society.’

Two weeks after Kurz’s visit, Macedonians went to the polls to elect their new government. Although the centre-right coalition led by VMRO DPMNE won the popular vote, it did not manage to form a government. Among other reasons, this was due to nationalist rhetoric used during the campaign which consequently led to reluctance among Albanian political parties to join in a coalition; in addition to the external EU and US pressure exercised on the Albanian parties because of the previous government’s deviations from the EU and NATO path. After five months of political uncertainty, which even turned violent at one moment when protesters stormed into the Parliament, a new, social democratic government was finally confirmed in May 2017. Its leader, Zoran Zaev, announced ‘a responsible, reformist, European government.’ He underlined that one of the three main goals of his government would be ‘integrating the country into the EU and NATO.’

Together with his foreign minister, Nikola Dimitrov, he went on to do everything that could be considered counterintuitive for Balkan, as well as European, nationalist politicians. They aimed at developing good neighborly relations by turning old enemies into allies following a simple plan: build trust by delivering concrete and ‘small’ steps, strike compromises and win the support of citizens by offering NATO membership and a credible EU perspective by opening accession negotiations.

In August 2017, Macedonia signed a Friendship Agreement with Bulgaria. Nationalists, some of them with considerable links to structures originating in Russia, did what Balkan and European nationalist could be expected to do: key political figures in the Macedonian government were portrayed as ‘traitors of Macedonia’. Their efforts to build trust and to compromise were depicted as weaknesses. In this highly polarised and tense atmosphere, citizens of Macedonia were called to the polls again, this time to vote in municipal elections. Interestingly, and certainly unexpectedly for some, the emotionalised rhetoric and isolationist agenda of VMRO-DPMNE, openly supported by Hungarian prime minister Viktor Orban, did not translate into municipal success. Instead, VMRO-DPMNE won in only 5 municipalities, losing 51 mayoral positions from the last municipal elections.

The results of the municipal elections came as wind in the sails for the incumbent coalition to continue on its firm foreign policy trajectory. This electoral success was followed by the successful signing of the Prespa Agreement between Greece and Macedonia. The Agreement was a compromise which stated that the Republic of Macedonia would change its name to the Republic of North Macedonia, but, however, the citizens of North Macedonia would continue to be ‘Macedonians’ speaking their language ‘Macedonian’.

From June 2018 onwards, the implementation of the agreement was intended to progress step-by-step over years and would be linked to North Macedonia’s progress on both the EU and NATO path. Implementing the Prespa Agreement, which has been under constant attack in both countries, has not been an easy ride, but so far it has been successful. On 6 February this year, Macedonian foreign minister, Nikola Dimitrov, came to Brussels for a historic meeting to sign the NATO accession protocol. The first to ratify the accession protocol was the Greek Parliament.

While the commitment of the current Macedonian government has clearly proven their dedication to their chosen European path, nationalists in North Macedonia and other countries equally struggle to accept the deep European integration of their country. It is time for European patriots, in the words of President Macron, and those who are convinced of peaceful European cooperation and deep European integration to recognise, support and respect their fellow European patriots in the Western Balkans. North Macedonia has been a success story of a European magnitude. It rarely happens that something as profound and fundamental to European values as this will to compromise and to build peaceful cooperation upon a decade long dispute comes from Southeastern Europe.

Zoran Nechev
Zoran Nechev is a Senior Researcher and Coordinator of the Center for EU integration, Institute for Democracy ‘Societas Civilis’ and Member of the Balkan in Europe Policy Advisory Group.

Will transatlantic relations break down over Iran?