The European Parliament elections in Croatia will be held on 26 May. As Tena Prelec explains, turnout is expected to be low, but the results will set the stage for presidential elections later this year and the country’s next parliamentary elections in 2020.

Croatia, the EU’s youngest member state, will take part in its third European Parliament election on 26 May. European elections are widely perceived to be a battleground for the next national vote: in this case, the presidential election scheduled for late 2019 and the parliamentary election to be held over the course of 2020. A low turnout is expected: in 2014, it was just above 25%, which is far less than the EU average (at 42.6%) and less than half the voters deciding to take part in the Croatian national elections.

But voter participation has been falling at national elections, too, confirming once again the overall disillusionment of the citizens with their political class, especially with the mainstream. A large number of Croats have expressed this dissatisfaction by leaving the country: the number of emigrants in search of better job prospects and a more meritocratic society has at least trebled since the country joined the EU in 2013.

Partially as a consequence of voters’ dissatisfaction with the mainstream offering, the Croatian political arena has witnessed a flourishing of smaller parties. New political options are present at the liberal-progressive side of the spectrum, with parties such as START, Pametno, and Mozemo (which even cashed in an unlikely endorsement from Pamela Anderson); on the right, with Independents for Croatia and the ultra-conservative MEPs Marijana Petir and Ruza Tomasic both running on their own; and there are also less ideologically clear options imbued with populism, such as the judge Mislav Kolakusic and the flamboyant (and Putin-friendly) Zagreb mayor Milan Bandic.

From committed leftists to hardened nationalists – whatever your political choices, there is truly someone to vote for this time. Most of these parties, however, have a very low chance of making it through. Their fragmentation means that, in the final count, the elections will probably, once again, send overwhelmingly mainstream candidates to Brussels. For the moment, these actors are only piercing the mainstream, not tearing it apart.

The main campaign topics have focused on mostly, but not exclusively, domestic issues. The party in power and clear frontrunner, the Croatian Democratic Union (HDZ), has closely aligned their messaging with the EPP platform, bringing up family values, Christian values, and arguing for a better use of EU funds (a recognised issue across the board, with a blame-game currently playing out over who is responsible). As for the main opposition parties – the Social Democrats (SDP), but also the centre-left Amsterdam coalition and the newly established party START – their messaging is mostly based upon the endemic corruption and clientelism problems present in the country, directing most of the blame for it at the HDZ.

Earlier this year, Croatia came under fire from a group of MEPs for their treatment of migrants who are trying to enter Croatia from the Bosnian border. However, the migration crisis is mostly mentioned in the media in a right-wing context, used by right-of-centre parties trying to score points against the HDZ – e.g. by the centre-right party Most (Bridge of Independent lists) or by former HDZ politicians who have joined far-right groupings. The topic of mass emigration from Croatia, on the other hand, is treated in different ways by different parties. While the HDZ brings it up mostly as an economic issue, some of the liberal-progressive parties have treated it as a social issue as well, relating it to a lack of meritocracy and widespread patronage and corruption.

Croatia is not yet a member of either the Schengen area or the Eurozone. The mainstream parties HDZ and SDP support Croatia’s accession to both, although some SDP politicians have stated that Croatia is not ready yet. Some politicians have called for a referendum on the introduction of the euro, and there is, as yet, no consensus among academics and intellectuals.

Finally, the Serbian minority party (SDSS) has a very specific stance on which they are campaigning, i.e. in favour of EU enlargement (which is, otherwise, not a particularly popular topic among mainstream parties). They argue for the speedy inclusion of the Western Balkan countries in the EU, or at least a strong pledge that this will happen soon.

Euroscepticism: Well-represented, but only on the surface

The party that has expressed the most openly anti-EU position is Zivi Zid (Human Shield). Born out of the battle of the small man against the system, Zivi Zid have embraced Eurosceptic and anti-atlanticist stances, openly arguing for Croatia’s withdrawal from the EU and from NATO in the past. They are currently polling third, with 7.7–9.7 percent of voting intentions. They fare particularly well with the younger electorate: one third of voters below 30 years of age have expressed their preference for this party.

How deep is their Eurosceptic conviction? The jury is still out, but all indicators suggest it is not so much a dislike of the EU that is driving voters to Zivi Zid, but antipathy toward their own political leaders. Zivi Zid is a party that has managed to channel Croatian voters’ dissatisfaction with the mainstream in a particularly successful way: their invectives against the ruling elites and in favour of the ‘small man’ have put them on the radar; their unbuttoned, and sometimes over the top, way of doing politics has kept the attention on them high. By adopting Eurosceptic stances, they have colonised a message that was not yet represented by any other political actor.

But, although Zivi Zid nominally advocated for Croatia to withdraw from the EU in the past, it is now doubtful whether this is their stance for the EP elections. In recent months, they have been forming alliances with kindred populist parties across Europe, including the Five Star Movement, Kukiz, and AKKEL, all the while speaking about reforming Europe, rather than withdrawing from the club. The fact that Zivi Zid are partially backtracking on their hard stance on EU membership probably goes to show that Croatians are actually not keen on leaving the EU. This is corroborated by a 2018 public monitoring study which found that attitudes toward the EU have improved in Croatia, where a positive view of the EU is now held by a majority of respondents (44%, up by 8 points, versus ‘neutral’ at 41%).

The ‘soft Euroscepticism’ present in Croatia takes a different form: a lingering grievance that Croatia is an EU member of a lower category, bossed around by the most powerful member states. This grievance is exploited also by several other parties: Most (the Bridge of Independent Lists), especially in the context of the migration crisis, but also by the SDP. It definitely falls short, however, of a popular support for EU withdrawal, as belonging to the club is still seen as the best of the available options.

Tena Prelec – LSE / University of Sussex
Tena Prelec is a Research Associate at LSEE-Research on South Eastern Europe (LSE European Institute) and a Doctoral Candidate at the School of Law, Politics and Sociology of the University of Sussex. She is a member of The Balkans in Europe Policy Advisory Group (BiEPAG). 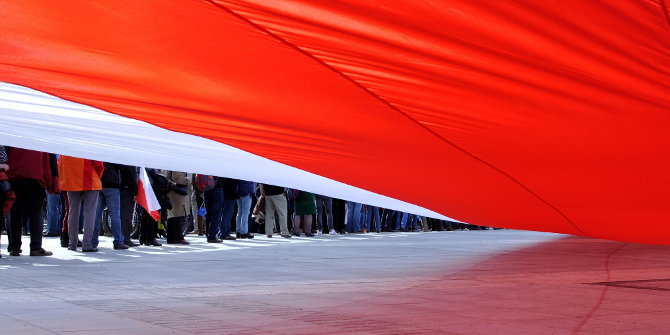