An unusually high number of members (10 out of 25) of the European Central Bank’s Governing Council will be replaced by the end of this year. But could the rise of Eurosceptic parties across Europe have an impact on these appointments? Corrado Macchiarelli and Mara Monti explain that keeping the ECB free from political interference may now constitute one of its biggest challenges.

The number of Eurosceptic parties in the European Parliament is expected to play a role in the future of the Eurozone. Looking at the European election results for the 19 member countries, the Eurosceptics have gained 134 seats out of 751 total seats in the new Parliament, compared to 104 seats in the previous Parliament. The question is however how much influence can anti-establishment parties gain and in what way could the European Central Bank could be affected? Such a question naturally arises amid heightened concerns over central-bank independence in OECD economies.

It is a crucial question because the head of each National Central Bank (NCB) nominated nationally sits in the ECB’s Governing Council, which formulates the Eurozone monetary policy and adopts decisions pertaining to banking supervision. In fact, Eurozone leaders are confronted with much more than replacing the ECB President at the end of October: more than a third (equal to 10 members) of the 25-member Governing Council, which includes ECB Board members and the 19 governors of the NCBs, will be replaced by the end of this year – an unusually high number. Among the Executive Board, the chief economist, Belgium’s Peter Praet, has been replaced by Ireland’s former Central Bank Governor, Philip Lane, because of the non-renewable 8-year term clause. The French board member, Benoît Cœuré, is due to leave in December. Besides Draghi, Praet and Cœuré, other central banks governors, namely Austria, Belgium, Estonia, Cyprus, Ireland Slovenia and Slovakia have been replaced, or are expected to be, by the end of this year.

In the case of the third-largest Eurozone economy, Italy, where the government is ruled by a coalition of the League, a Eurosceptic party, and the Five Star Movement, an anti-establishment party, the coalition is facing the prospect of being under-signified within the ECB, having no representatives at the Executive Board for the first time ever since 1998. In fact, the President of the ECB cannot come from the same country for two consecutive terms and the current Vice-President, Luis de Guindos, will hold his seat until 2026, ruling out Italy for two seats out of the six available at the Board.

The euro’s two largest economies, Germany and France, have permanent seats, and the terms for the final two seats will not end until 2020 and 2022, respectively. That means Italy’s only chance to fill a Board seat is in the case a German or French member will fill in the President’s or Vice-President’s vacancy, freeing up that country’s permanent seat. If Draghi will be succeeded by a member whose nationality is currently not represented in the Executive Board (i.e., Finland or the Netherlands), there would be no room for an Italian until the end of 2020, when Yves Mersch will depart.

The League’s Matteo Salvini has already signaled Italy will certainly seek a seat on the European Central Bank’s Executive Board, upon the termination of Mario Draghi’s presidency, and possibly use it to skew the ECB’s preference for bond-buying. However, the chances for a non-Europhile candidate to be admitted at the Executive Board appear slim at the moment.

The procedure for appointing a member of the Executive Board of the European Central Bank is set out in Art. 283 of the Treaty on the Functioning of the EU (TFEU). The European Council appoints all 6 members, which includes indeed both the ECB President and Vice-President. After a euro area member proposes a name for the Executive Board – which is discussed in the context of the Eurogroup – the European Council takes its decision on the basis of a Council recommendation, in consulting the European Parliament and the ECB’s Governing Council. The decision by the European Council is taken through a qualified majority vote. In other words, in order for a candidate to go through, the approval of 55% of Member States (equal to 15 countries) will be required, which must represent at least 65% of the EU’s population. 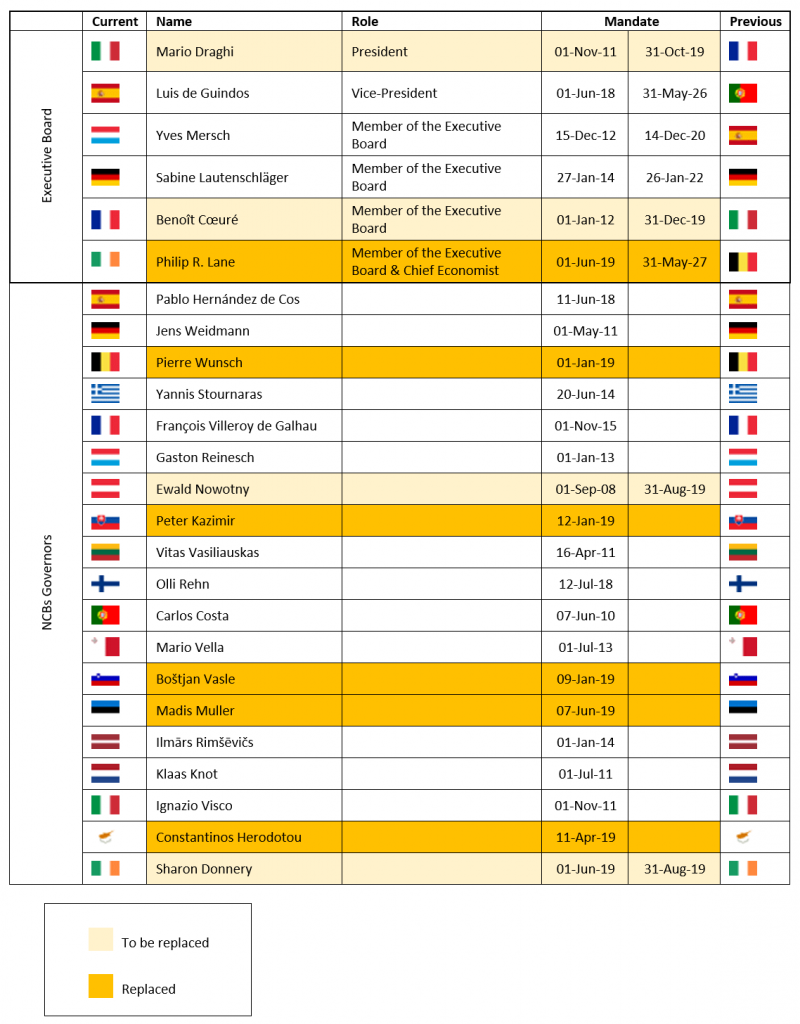 By contrast, the governors of each NCB are nominated at the national level. In the case of Italy, for instance, the procedure is established by Art. 19, par. 8, of the Law of 28 December 2005, n. 262, whereby a decree by the President of the Republic is required, upon the proposal of the PM, after deliberation by the Council of Ministers and consulting the Board of the Bank of Italy. Despite the initial tensions in February between Italy’s administration and the Bank of Italy regarding a second mandate for the Deputy Governor of the Bank of Italy, Italy’s Central Bank Governor, Ignazio Visco, has been quick in dismissing concerns over increasingly tense relations between Italy’s central bank and the government, saying that the national central bank and its independence were not under attack.

Austria was a different story: the Eurosceptics played an important role in designating their National Central Bank’s governor. This was the case for the nomination of Robert Holzmann as the Governor of Austria’s Central Bank. As a new figure agreed between Austria’s two ruling parties – Chancellor Sebastian Kurz’s conservatives and the far-right Freedom Party – Holzmann went on to replace Ewald Nowotny, appointed by the previous social democrat government. That happened just before the ousting of Kurz and his cabinet after a scandal stripped him off of his coalition partner.

Since the ECB was established, its independence has been its highest value and the ECB’s constitution provided plenty of safeguards: through the Treaties the ECB is not entrusted any role of direct fiscal impact and, unlike the Fed, which has a dual mandate for price stability and employment, the ECB has a broad aim of price-stability as its only objective. In general, the necessity of having a certain degree of economic moderation derives from a fundamental mismatch of horizons, and therefore of interests, between political and economic actors. Politicians have a short-term horizon because they are accountable to the electorate in forthcoming elections; this can lead them to pursue favourable (expansionary) policies in the short term, which are otherwise unsustainable in the medium to long term. For this reason, specific functions are delegated to so-called third entities, whose horizon is longer. A classic example of how to achieve this dichotomy is indeed an independent central bank, which can commit to low inflation in the medium term.

Recently, the ECB has been under attack over its pursuit of price stability-oriented monetary policy, thus challenging its consensus of central bank independence. In Italy, the government has shown increasing impatience with Mario Draghi after he warned that Italy’s borrowing costs would escalate unless it kept to Eurozone fiscal restrictions. Following a long standoff, in June the European Commission confirmed that disciplinary action may be warranted for Italy over its rising debt, in the light of its political outlook. This happened days after the government vowed to pursue the introduction of mini-bots, or tradable Treasury bills, which citizens could use to pay future taxes, in clear breach of the debt monetisation rules enshrined in the TFEU (Art. 123). During the press conference on 6 June this year, Draghi expressed concerns about the lawfulness of those measures, adding pressure to an already complicated political scenario.

While leaving Italy under-represented at the ECB’s Governing Council might turn out to be politically unfeasible, keeping, at the same time, the ECB free from political interference will be the biggest challenge. Under the new lead, the ECB will have less leeway to employ its conventional monetary policy measures, given the still stringent proximity to the zero bound and stubbornly low inflation expectations. Albeit the new executive may consider moving beyond the standard ECB toolkit (e.g., in preparing for a post-Draghi ECB, Cœuré has suggested the ECB itself could issue bonds should the economy have more slack than previously thought), ceteris paribus these constraints will make responsible national policies and politics more crucial than ever in combatting the next slump.