Angélica Szucko discusses the EU White Paper on the future of the union and analyses the institutional response to the Brexit vote. The EU has to tackle future challenges in a more flexible way than before and acknowledge that the integration model needs to be revisited.

The UK’s decision to leave the European Union – alongside the recent crises on the continent – have led to reflections about the reformulation of the European project. In this vein, the publication of the “White Paper on the Future of Europe: reflections and scenarios for the EU27 by 2025” on March 1, 2017, even before the UK had officially communicated the EU about their withdrawal decision, represents an institutional response to the Brexit vote.

The EU’s response, which points to five possible scenarios based on the main drivers of the EU27 and including disintegration alternatives, came at the time of the landmark 60th anniversary of the Treaty of Rome, well known by its fundamental integration principle of “an ever closer union”. Indeed, the EU has to tackle near future challenges in a more flexible way than before, that is, to acknowledge that the integration model needs to be revisited.

The EU is a unique actor both in material and ideational terms. From the material point of view, the EU is the largest single market in the world and euro is the second most internationally used currency, but there are also some challenges in relation to the shrinking and ageing population. In ideational terms, the community is the biggest donor of humanitarian aid and development cooperation and played an important leading role in global climate governance, especially in the Paris Agreement. Besides all those aspects, the EU has been facing a number of challenges to its integration project, such as the 2008 global financial crisis and its impact on the Eurozone; the refugee and migration crisis; the rise of nationalist and Eurosceptic movements; and finally, the British withdrawal. In a nutshell, according to EU Commission president Jean-Claude Juncker’s State of the Union speech in September 2016: “Our European Union is, at least in part, in an existential crisis”.

In fact, since the British referendum, we have seen several initiatives from the European institutions to rethink the integration process. Some of them were already ongoing, such as the EU Global Strategy published only five days after the British vote, but others are a direct response to Brexit, such as the White Paper on the future of Europe and the European Parliament debates with EU leaders that have been taking place since 2017. According to European Council president Donald Tusk’s address to EU 27 in an informal meeting just six days after the Brexit vote:

“We also discussed the fact that there are too many people in Europe who are unhappy with the current state of affairs and who expect us to do better. […] This is why we have started a political reflection on the future of EU with 27 states…”

All those official reactions of EU institutions intend to promote a reflection about the grounds that underpin the community and the future of the EU at 27. The major objectives were the consolidation of EU position in the international system, the internal reorganisation of EU objectives as an integration project and its institutional adaptation to UK’s departure. Donald Tusk also pointed out in a letter to EU members in January 2017 that the EU now has three major concerns. The first one has an external origin and corresponds to the new geopolitical situation with a more assertive China, a re-emerging Russia, and the unpredictable US, besides the proliferation of conflicts and terrorist threats that could act as a centripetal force pushing for a more integrated EU. The second one, of internal origin, is the rise of nationalist and Eurosceptic movements within EU states that could put an end to integration. And finally, the third one, also of internal origin, is the disbelief of pro-EU elites in the integration process, which could function as a deciding factor for the future of the EU. All those concerns may explain why the European institutions started to re-think the integration process.

The White Paper on the Future of EU is the most symbolic document in this process as it presents five possible scenarios to the EU27 on a spectrum of broader or narrower institutional and political integration and including options of disintegration: 1. carrying on; 2. nothing but the single market; 3. those who want more do more; 4. doing less more efficiently; and 5. doing much more together. Of course, the document is not a detailed plan, but it points out five possible options to the EU future that I classified in a framework of more integration or disintegration. 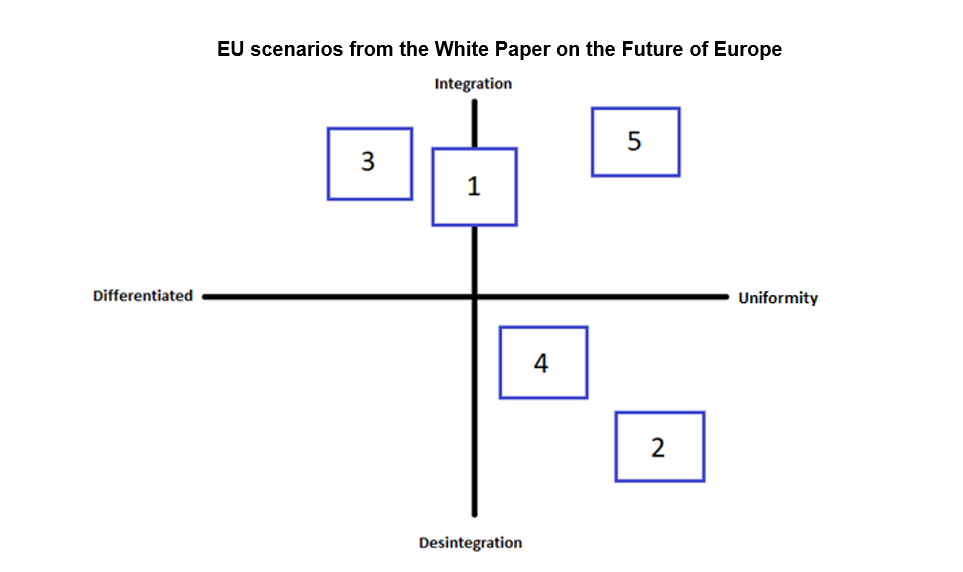 The most viable scenarios in the short and medium-term are the first, dubbed “carrying on”, which refers to keep the current status quo; and the third, called “those who want more, do more”, that proposes an EU at different speeds. Actually, this multispeed Europe already exists in some aspects if we considered the opt-outs of some EU members to the integration process. Then, scenarios one and three are very similar; however, the third option would allow more flexibility for differentiated integration, aiming to prevent the Community from stagnation or disintegration when not all EU Members agree to pursue further integration.

Scenarios two and four represent setbacks in the direction of disintegration, particularly the idea to go back to a single market only, which could symbolise a weakening of the Community in the international system concerning the challenges faced. And the fifth scenario is extremely unlikely to occur in the short or medium terms considering all crises faced by EU in the past few years and the rise of anti-EU movements. In fact, there is no great incentive for countries to seek more integration, and several Member States might file objections to it, due to their domestic audiences affiliated with Eurosceptic and nationalist movements. The lower-left quadrant is not contemplated in the White Paper’s scenarios; because it corresponds to the Article 50 situation when a Member State voluntarily decides to exit the European Union and to negotiate a new relationship with the Community, an example of differentiated disintegration.

Although some initiatives to rethink the European project have already started, there are many challenges to overcome in order to really reform the EU, such as: the need to invest in new technologies and climate change and low carbon economies; the immigration and the protection of European borders; the security threats to the EU; the socio-demographic challenge; the effects of the economic crisis; and the expansion of eurosceptic and xenophobic agenda. It is just the beginning of a new moment in the European Union that could effectively change some dynamics of the regional integration. And, of course, the newly elected European Parliament and the new presidents of the European Commission and European Council will have to deal with the need for a brand new integration process. Until now, the narrative constructed by the EU to face those crises has tried to reaffirm that difficulties can be transformed into opportunities, and I quote from the White Paper: “These are difficult times but Europe has always been able to adapt. This time, too, we need to respond better to the changing reality and to transform challenges into opportunities.”

Note: This article first appeared on our sister site, LSE Brexit. It gives the views of the author, not the position of EUROPP – European Politics and Policy or the London School of Economics. Image by Rock Cohen, Some rights reserved.