In recent years there have been several attempts by Western European governments to reform second chambers, though the majority of proposals have failed to pass. Michelangelo Vercesi assesses the conditions when such reforms are proposed, and finds that they are often instigated during times of democratic strain when the governing party wishes to reduce the number of veto players. However, the reforms tend to fail when there is no broad consensus for the proposals, which has implications for considering when a democracy is able to instigate reforms.

When do political elites decide to reform national parliaments? Why do they reform? Is reform success likely? National parliaments are central – if not the central – institutions of representative democracies. To answer these three questions we need to pinpoint the drivers that push democratic governments to modify core features of the countries they rule. Experts tell us that political institutions are more likely to be questioned during periods of crisis, either political or economic. The argument is straightforward: a crisis allegedly indicates that the system has not been able to cope with challenges; hence, we need to reform the system. In fact, Western democracy has been witnessing a crisis of representation and performance for years. Especially since the 1990s (but already since the 1980s), voters have detached from political parties, citizens have been dissatisfied with national and supranational institutions, and demands have been made for new forms of participation.

In the first years of the 21st century, several attempts at reforming parliaments have been instigated in European countries. In particular, the focus has been on the second chambers of bicameral parliaments. It has been shown that second chambers are powerful institutional veto points, which are often criticised as sources of policy stalemate. It is therefore interesting to understand whether the attempts to reform them have been driven by a desire to make political systems more efficient in times of democratic tension.

The power of second chambers is jointly defined by their formal powers, the compositional incongruence vis-à-vis the lower chamber (in the sense that it is harder for the party majority of the lower house to ‘whip’ the same majority in the upper house), and their legitimacy in the polity. The stronger the chamber is, the more it has potential to represent, affect legislation, and control the executive. Empirical measurements find that usually European second chambers score lower in terms of formal powers. At the same time, they derive their strength mostly from the ability to represent specific sectors (e.g., territories, expertise, vocational categories) of society, rather than the ‘people’ as a whole (i.e., with its party divisions). Eight attempts atsubstantial reform were pursued in Europe along one or more of the three dimensions from 2006 to 2016, in  Belgium, Germany, Ireland, Italy (twice), Romania, Spain and the UK. It is worth noting that only two attempts (in Germany in 2006 and in Belgium in 2011) were successful. In most cases, reformers wanted to reduce the veto power of the chamber (and sometimes to counterbalance this loss with an increase of strength on other dimensions); in this regard, the Romanian (2009) and Irish (2013) cases are outliers, in that the reformers advocated the full abolition of the second chamber. Spain (2006) and UK (2012) are the only countries where reformers did not target the chamber’s formal powers; in both cases, they instead aimed to achieve a more variegated and legitimate institution. When reforms were proposed, the seven countries exhibited signals of democratic tension, such as mainstream parties’ decline, inter-institutional conflict, lower levels of participation or dissatisfaction with national institutions, when reforms were proposed. This goes in the direction of a posited relation between ‘crisis’ and reforms. Figure 1 displays the main traits of the reform processes. 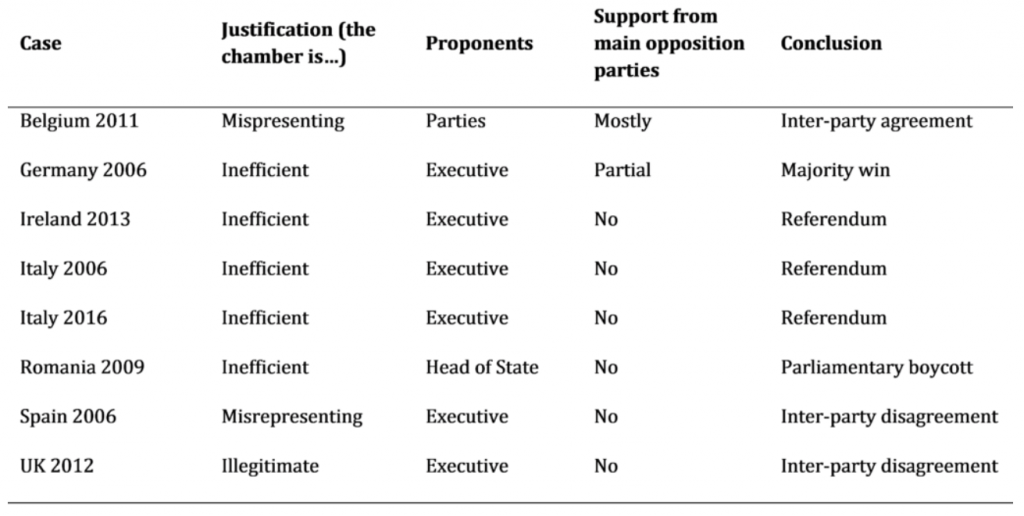 If one enters the black box of the processes and seeks to disentangle actors’ roles, party strategies, and institutional constraints, we find interesting evidence. Excluding those situations where citizens were dissatisfied with institutions (which can happen also when democracy per se is not under pressure), more than 50% of cases testify to an attempt by traditional political elites to put reform on the agenda in response to new party challengers or inter-institutional conflict. The Irish cabinet proposed the abolition of the chamber in a very particular moment of financial crisis. In contrast, Italy (especially in 2006), Spain, and the UK are placed in a more marked tradition of public criticism towards the upper house, with roots that date back to before the 2000s. Only in cases where most of the opposition supported the reform, the goal was achieved. This sustains the argument that consensus is often necessary to get reform packages done. In a similar vein, inter-party disagreement made the reform fail in Spain and the UK (where the conflict was even intra-cabinet). Where a final referendum was constitutionally due (Ireland and Italy), the cabinet could get the reform approved, but then voters rejected it. It is interesting that, even in those countries where reforms failed, a preliminary agreement on the necessity of reforming the chamber could well exist.

We can summarise the findings this way: in times of ‘democratic tension’, governing elites are likely to propose reforms of second chambers to decrease the number of veto points in the system, so that policy-making can be (ideally) faster and more efficient. Counter-elites, in turn, seem unlikely to support these reforms if they think that opposing them will be beneficial for them (and detrimental for mainstream parties). Finally, empirical records suggest that ruling elites are actually more prone to reform parliamentary second chambers in turbulent times, especially if they think that upper houses’ veto power will create a detrimental policy stalemate. However, those factors that put Western democracies under pressure and that push elites to reform are also sources of strain in the process of reform. Reforms need broader consensus; at the same time, the current instability of party competition – with new contesters, more party fragmentation, volatility, higher radicalisation – seems to place democratic institutions into a circle characterised by dissatisfaction and lack of adjustment.

These observations encourage the public to question the flexibility of parliamentary institutions. In particular, one can wonder to what extent parliaments can absorb external shocks and the impact of long-term changes. Political willingness is not always sufficient and often institutions are characterised by inertia. The more a country advances along an institutional path, the harder it is to change direction. This is what scholars call increasing returns’ effect. However, change and elite renewal arebeneficial for democracy, as a system of delegation and accountability between voters and responsive elites. The eight cases analysed do not provide definitive answers to our initial questions, but we can draw some lessons and sparks for vibrant future debates about the health of representative democracy and its ability to reform itself.

Note: This article first appeared on our sister site, Democratic Audit. It gives the views of the author, not the position of EUROPP – European Politics and Policy or the London School of Economics. The article draws on the author’s paper, ‘Democratic Stress and Political Institutions: Drives of Reforms of Bicameralism in Times of Crisis,’ in Representation: Journal of Representative Democracy. Featured image credit: House of Lords 2015 / Photography by Roger Harris (CC BY-NC 2.0)

Michelangelo Vercesi – Leuphana University of Lüneburg
Michelangelo Vercesi is Research Associate in Comparative Politics at the Center for the Study of Democracy of Leuphana University in Lüneburg (Germany). He is elected member of the executive board of the international Committee on Political Sociology (CPS). His research focuses on comparative institutions, political elites and leadership, and political parties. He has published in many venues, such as Representation, Parliamentary Affairs, Regional & Federal Studies, Government and Opposition, The Oxford Handbook of Political Executives, and the SAGE Handbook of Political Science – A Global Perspective. 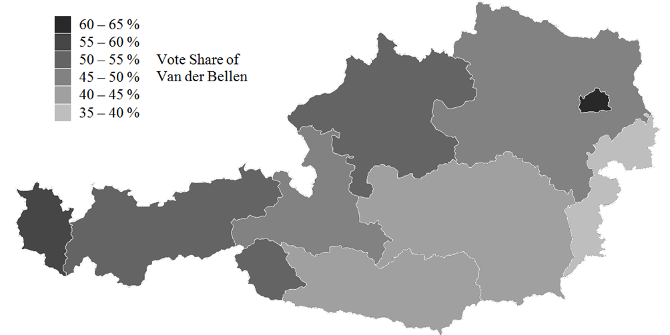 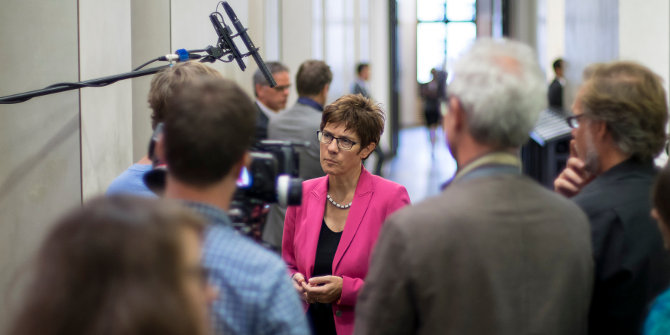