The field of civil protection has emerged as one of the most important policy areas in European Union cooperation. Recent natural hazard events, terrorist attacks, and the migration crisis have put civil-protection systems in Europe to the test. In response to these crises, the Union has increased its efforts to provide aid to countries in need of assistance and to bolster its capacity to conduct joint operations. Due to the transboundary nature of many crises, such as floods or wildfires, there is an urgent need for EU members to be able to work together across borders and within a European framework.

The concrete manifestation of the EU’s commitment to protect its citizens is the solidarity clause of the EU Treaty, which establishes a legal obligation for the EU and its member states to assist each other when a member state is the object of a terrorist attack, natural hazard event or man-made disaster. To this end, the Union has created a civil-protection mechanism, which has been activated 300 times, including 126 times in Europe, since it was established in 2001 to respond to emergencies around the world and in the EU. The operational heart of the mechanism is the Emergency Response Coordination Centre (ERCC), which is responsible for coordinating the response of the participating countries in the event of a crisis.

Participating states in the Union Civil Protection Mechanism (UCPM) commit national resources for emergency response to a common European Civil Protection Pool. This pool allows for better planning and coordination of response activities at European and national levels and thereby contributes to a faster and more reliable EU response to emergencies. Recently, in March 2019, the EU further strengthened its disaster management system by establishing a new European reserve of capacities (the ‘rescEU reserve’) that will make the EU better prepared to respond to crises. Hence, although civil protection largely remains a regulatory and operational competence of the member states, the Union has set out increasingly ambitious policy goals, backed up by formal and legal institutionalisation.

But how do we build trust in this enhanced EU-coordinated civil-protection system among citizens and among officials working with these issues? Opinion polls have shown that a large majority of European citizens support a joint civil-protection policy among the member states. There is a strong consensus that coordinated EU action is needed to respond to disasters. As shown in a past study, support for EU-coordinated civil protection among citizens is associated with a compensatory logic, according to which people coming from countries with institutions that inspire little trust – where they are seen as corrupt and low-performing – will be more inclined to support EU-level solutions. By contrast, in countries where citizens are treated well by their own national institutions of public administration, people are less likely to support EU-coordinated civil-protection efforts.

Previously, however, little was known about the views national officials held about the EU’s ability to provide needed assistance or to help solve joint problems in the event of a disaster. This is important because a high degree of trust in crisis-management systems, both among citizens and practitioners, is generally deemed essential for their proper functioning. As we have shown in an earlier study, it is crucial for the effectiveness of crisis-management systems that they enjoy the trust of the people working together with them. 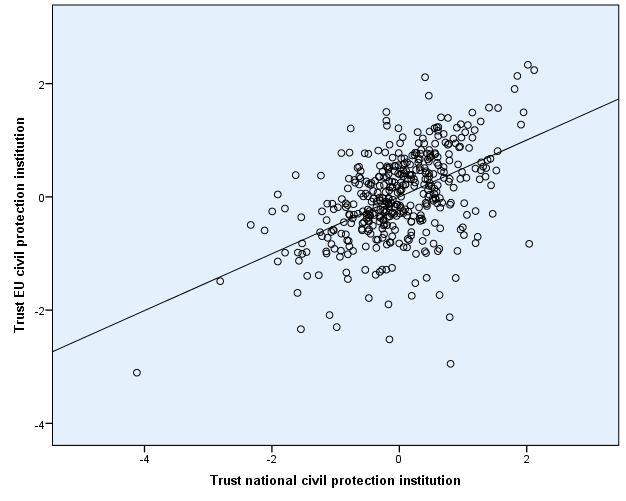 This finding of congruence among public officials between trust in institutions at the national and at the supranational level differs from the views of citizens, where people with little trust in national institutions are more inclined to support EU-level solutions. What explains the different evaluations that citizens and practitioners have about this relationship? In our view, professional networks, first-hand knowledge, and incentives are likely explanations for this discrepancy.

Citizens that express trust in their national institutions and are happy with them, appear to be disinclined to look to EU-level involvement as they see no need for it. In contrast, national officials working with civil protection have had the opportunity to build trust in the EU level through their professional contacts with EU colleagues, first-hand experience of working with the EU, and knowledge of what capabilities are available through the EU. Therefore, they are more likely to perceive EU-level cooperation as beneficial and complementary to national efforts.

Our interpretation of these findings is that trust in EU governance among national practitioners starts at the national level: i.e. if there is no confidence in national institutions, then trust in EU-level institutions and cooperative efforts will be difficult to establish. The evidence furnished thus far has far-reaching implications for the prospects that the UCPM will be able to serve as a useful expression of European cooperation and solidarity. Since the EU is not a standalone mechanism that can be separated from its national systems, and since trust in the EU is rooted in the degree to which national institutions are trusted, any move to strengthen EU cooperation at the central level must not neglect the national level.

It is well-known from the research that building trust is a demanding endeavour. Therefore, based on our findings, a fruitful way forward would be to develop EU-level cooperation in this field further by strengthening civil protection both from below (at the national level) and above (at the EU level), which is exactly what the recent creation of rescEU attempts to accomplish. While the rescEU plan provides the EU with an enhanced response capacity by creating a reserve of assets, such as firefighting aircrafts, water pumps, and field hospitals, a major part of the new legislation is also aimed at improving the national capacities of the member states. The plan calls for the Commission to help member states strengthen their national capacities by co-financing the adaptation, repair, transport, and operation costs of their existing resources. Once these national assets have been upgraded or repaired, they become part of the European Civil Protection Pool and can be used to respond to future European or international disasters.

As our research strongly suggests, fortifying the weakest links among the member states by improving the national capacities of these states is crucial to enhancing the confidence in and effectiveness of EU civil protection. The revised EU civil-protection system should be able to offer added value to national civil-protection institutions as long as it provides sufficient space for professional decision-making and as long as it performs well in helping better manage national and transboundary crises. Such efforts may also bridge the large gaps between different civil-protection and crisis-management systems, thereby contributing to a safer Europe.

Note: This article gives the views of the authors, not the position of EUROPP – European Politics and Policy or the London School of Economics. Featured image: Damage from the 2018 wildfires in Greece, Credit: Guillaume Baviere (CC BY-SA 2.0)

Charles F. Parker – Uppsala University
Charles F. Parker is Associate Professor of Political Science at the Department of Government and serves as the deputy chair of the board for the Centre for Natural Hazards and Disaster Science (CNDS) at Uppsala University in Sweden. His research has focused on climate change politics, leadership, crisis management, and the origins and consequences of warning-response problems. He tweets @Parker_CF

Sten Widmalm – Uppsala University
Sten Widmalm, Professor in political science at the Department of Government, Uppsala University in Sweden. He has carried out extensive research on crisis management in the EU, political tolerance, decentralisation and corruption, and democracy and conflict. He tweets @StenWidmalm 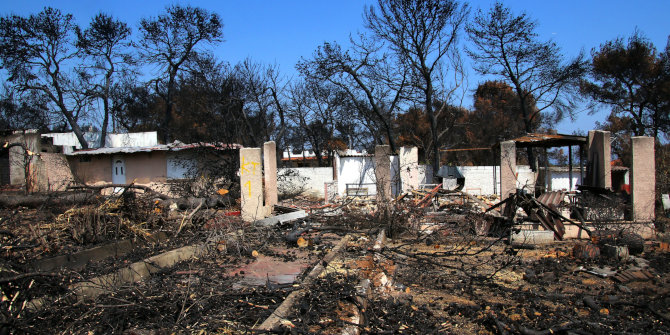