The EU’s Conflict Minerals Regulation, which will come into force in 2021, aims to restrict the trade of minerals that are mined via forced labour and used to finance armed conflicts. As Dirk-Jan Koch and Olga Burlyuk explain, the EU attempted to learn from the mistakes of earlier legislation in the United States that had sought to tackle the problem. They write that while EU processes can be lengthy and bureaucratic, the case of conflict minerals legislation shows these long-winded processes do create a setting in which lessons can be learned.

When the EU was drafting and eventually adopted its regulation on conflict minerals in 2017, seven years after the United States had adopted its own legislation on the matter in 2010, the EU actively drew lessons from the negative unintended consequences of the American law. You might think ‘good news is no news’ and stop reading here. But there is a great deal to learn from the experience and the critical elements – which might be lacking in other policy instances and contexts – that stimulated the EU to learn in this particular case.

During the financial crisis of 2008-10, the Obama administration sought to develop extra regulation to reduce risks in the financial sector and drafted the 2010 Dodd-Frank Act. As part of this wider regulation, Article 1502 with respect to conflict minerals originating from the Democratic Republic of Congo was introduced after intense lobbying by the conflict-minerals campaign. It obliged stock-listed companies in the US to declare which measures they had exercised to prevent ‘blood minerals’ in their supply chain from contributing to conflict in the Great Lakes region. The law addressed a serious problem: violent conflict around the mining areas in the Democratic Republic of Congo and a lack of transparency about where the minerals mined there end up.

Alas, this highly necessary and seemingly well-intended piece of legislation spurred a host of, sometimes exaggerated,  negative unintended effects. The Dodd-Frank Act was introduced rather hastily and singled out one specific region, causing a shock-effect. Smelters and refiners started to boycott the Great Lakes region at large rather than problematic mines selectively. As a result, a de-facto embargo emerged in the early days of the law, negatively affecting the ‘clean’ mining areas and miners.

While the European Parliament quickly declared its own wish to legislate on conflict-mining, it didn’t want to further destroy the livelihoods of legitimate miners. Eventually, the EU seems to have succeeded in drafting a ‘better law’, different from the US law on three counts: it has global scope (to minimise the effect of stigmatising one region); it foresees gradual implementation (to avoid a shock-effect); and it focuses on inclusion instead of exclusion (in that companies need to demonstrate measures they have taken to improve the situation rather than declare themselves ‘conflict-free’).

The advocacy coalition framework provides some clues for understanding how such a sensible policy outcome came about. Advocacy coalitions comprise individuals who belong to different groups (for example, civil servants, journalists, academics and politicians) but share underlying core principles. These actors share a set of normative and causal beliefs and engage in coordinated activity over time. In the case of the US and EU conflict mineral laws discussed here, two opposing transatlantic advocacy coalitions emerged: pro-regulation and against-regulation. Both pushed the EU to consider the effects of the US law, but in very different ways.

While the EU did learn, this policy learning proved to be a politicised process bounded by clear limits. Evidence about the unintended effects was socially constructed by advocacy coalitions in function of their respective agendas. The degree of learning depended on the frames and the strength of advocacy coalitions and was not a neutral, technical process. The lessons from advocacy coalitions with stronger frames (‘blood minerals’) were taken up more readily than those with less attractive frames (‘let’s reduce the administrative burden’). Similarly, advocacy coalitions with growing and increasingly vocal membership were more likely to see their proposed lessons learned.

While there is much criticism about EU processes being lengthy and bureaucratic, the case of conflict minerals legislation shows that these long-winded processes do create a setting in which lessons can be identified, discussed and eventually learned. It remains to be seen what the negative unintended consequences of EU conflict minerals legislation will be when the regulation enters into force in 2021. Yet it is important to remember that EU institutions are willing and capable of making an effort to anticipate and mitigate those when they occur.

Note: This article gives the views of the authors, not the position of EUROPP – European Politics and Policy or the London School of Economics. It is written in a personal capacity and does not reflect the official viewpoints of the Netherlands Ministry of Foreign Affairs.

Dirk-Jan Koch – Radboud University
Dirk-Jan Koch is Professor (special appointment) in International Trade and Development Cooperation at the Radboud University in Nijmegen, and Chief Science Officer of the Netherlands Ministry of Foreign Affairs. His latest publications include Is it time to ‘decolonise’ the fungibility debate? (2019, Third World Quarterly, with Zunera Rana) and Exaggerating unintended effects? Competing narratives on the impact of conflict minerals regulation (2018, Resources Policy, with Sara Kinsbergen).

Olga Burlyuk – Ghent University
Olga Burlyuk is FWO Postdoctoral Fellow at the Centre for EU Studies, Ghent University. Her research is situated at the intersection of EU/European studies (with a focus on external policies of the European Union) and Ukrainian studies (with a focus on Ukraine’s socio-political transformation). She has recently published edited books on Unintended Consequences of EU External Action (2019, Routledge, with Gergana Noutcheva) and on Civil Society in post-Euromaidan Ukraine (2018, Ibidem-Press/Columbia UP, with Natalia Shapovalova). 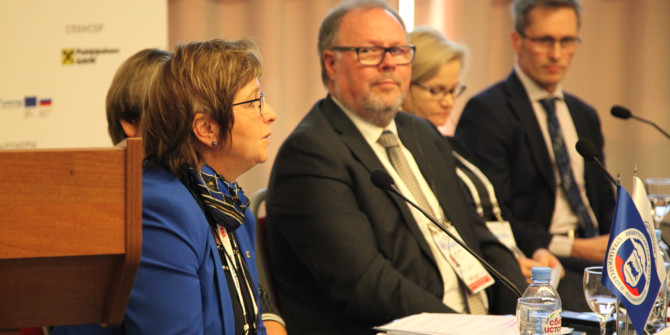