Euroland or Neverland? Lorenzo Codogno argues that constrained monetary policy calls for a greater role for fiscal policy in supporting the Eurozone economy, as former ECB President Mario Draghi recently suggested. Yet of the three potential routes that could be taken in this regard, none seem destined to be implemented. Leaving aside structural issues, which may well prolong current economic weaknesses into the medium term, the current policy mix will most likely withdraw oxygen from the Eurozone’s already suffocated aggregate demand.

As in Peter Pan’s fictional island of Neverland, people in Euroland refuse to grow up and face reality. The “never-never” refers to the idea of a countercyclical fiscal stimulus, which still faces massive opposition in European capitals. To put things straight, in normal times fiscal policy should focus on enhancing potential growth rather than trying to micromanage the economic cycle. However, today’s times are anything but normal. Interest rates up to long-term maturities are in negative territory, and the ECB has restarted quantitative easing.

The only chance to gradually ‘normalise’ its current policies, bring interest rates back into positive territory and allow proper monetary transmission through the banking channel, without the risk of hindering the ability of banks to expand credit, is through support to aggregate demand from the fiscal side. Beyond some official statements and some still-very tentative announcements, the impression is that of deadlock. European countries seem unable to build any form of consensus in favour of the view that fiscal stabilisation is a collective responsibility within the Eurozone.

The controversial decision of the Governing Council of the European Central Bank to introduce another package of easing measures on 12 September generated substantial debate. The recent plea to use fiscal policy by ECB President Mario Draghi was not well received by all observers and in many European capitals. For instance, six prominent former central bankers published a memorandum criticising ECB monetary policies, saying they have been unsuccessful and probably aimed at bankrolling indebted governments. They said:

“There is broad consensus that, after years of quantitative easing, continued securities purchases by the ECB will hardly yield any positive eﬀects on growth. This makes it diﬃcult to understand the monetary policy logic of resuming net asset purchases. In contrast, the suspicion that behind this measure lies an intent to protect heavily indebted governments from a rise in interest rates is becoming increasingly well-founded. From an economic point of view, the ECB has already entered the territory of monetary ﬁnancing of government spending, which is strictly prohibited by the Treaty.”

On 7 November, the European Commission published its Autumn Forecasts and they do not show any significant fiscal expansion. The Commission fully backs the call for fiscal expansion, but it is somewhat constrained in what it can suggest in its report. Please note that the European Commission is better positioned than any other observer/institution to assess the policy stance of European countries and the stance for the Eurozone overall. In fact, Commission staff look at all Draft Budgetary Plans submitted by all EU/Eurozone countries, they discuss them with governments and national officials, and they finally come up with overall estimates.

Figure 1 presents the just-published Commission forecasts on the Eurozone output gap and the change in the structural balance (a proxy for the overall Eurozone fiscal stance). It is interesting to look at the vintage of the forecasts. Despite having such privileged insight information on fiscal policies, the Commission has consistently shown an expansionary bias in its projections since 2017. In other words, over the past three years, fiscal policy has turned out to be much tighter than what the Commission had projected. This is especially true for Germany (Figure 2). 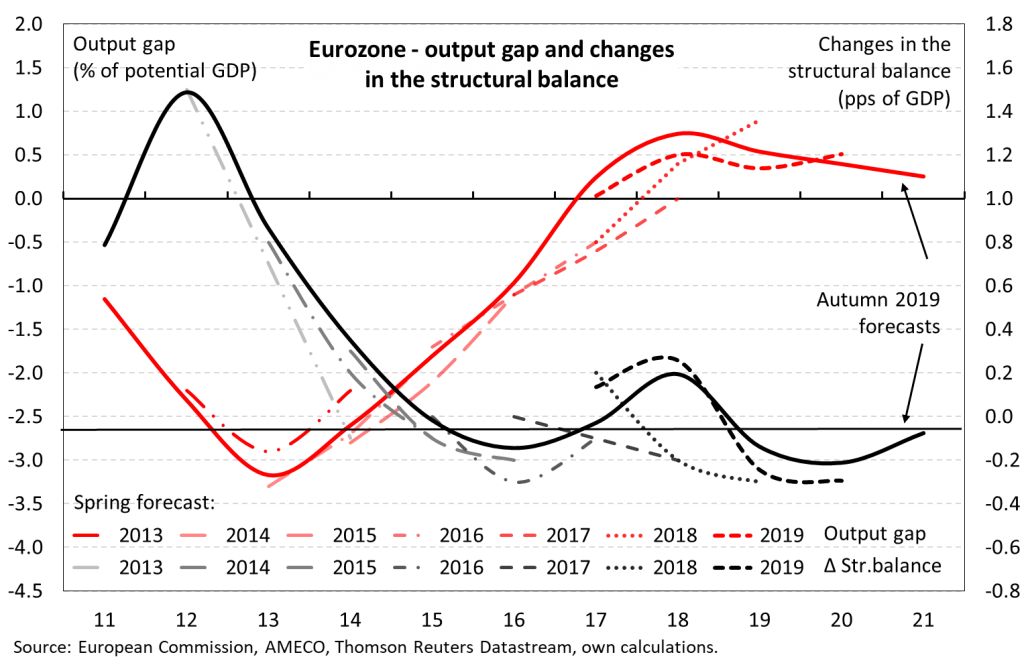 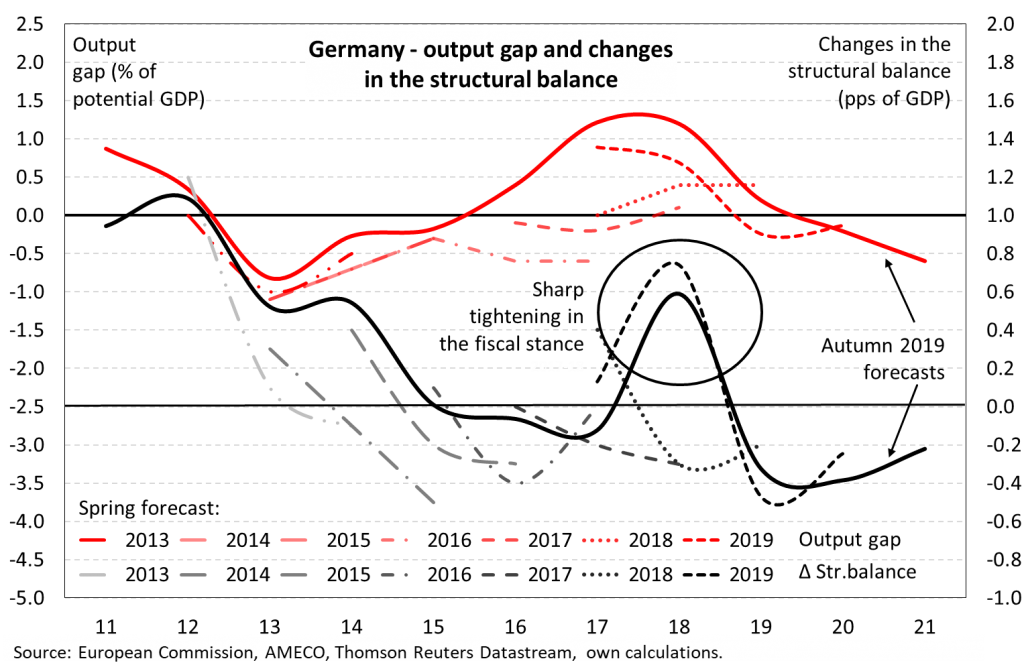 First, without changing existing Treaties or any substantial variation in the current policy framework, the Commission with the support of European leaders could try to achieve a better policy mix through policy coordination. This would imply exploiting all possible fiscal space currently available at the national level and using the maximum flexibility allowed by the rules.

Given that Germany is de-facto the only big country with fiscal space, this would inevitably put any such initiative on a collision course with the country’s internal debt brake policy, the Schuldenbremse, and budget policy, the Schwarze Null. More likely, Germany, the Netherlands, and possibly others will introduce separate policy initiatives to make room for additional fiscal expansion, such as funds dedicated to infrastructure or green investment, instead of going for outright fiscal expansion. At any rate, it is not even clear whether moving within the boundaries of existing rules would provide a material contribution to the policy mix in the Eurozone as the potential leeway is limited.

In Germany, there have been calls for the introduction of a fund supporting investments related to climate policies, mainly supported by the Green party, or alternative requests for investing in softening the impact of the ageing population (Deutchlandsfonds). As of writing, this does not appear to have led to any concrete policy action. Moreover, the Klimapaket, a broad-based policy package announced after the summer, introduced a number of environmental initiatives, but no significant new funds were brought to life leaving aside an old climate fund (‘EKF’ established in 2010), which contained €4.5bn (about 0.1% of German GDP) at the end of 2018, that will be used for the financing of some of the measures in the package.

In the Netherlands, King Willem-Alexander confirmed in a speech to both Houses of Parliament in September 2019 that the government would set up a national investment fund early in 2020. The fund will aim to help the economy expand in a sustainable way for the next 20-30 years by strengthening the country’s earning capacity, focusing investments on specific projects meeting tightly formulated criteria in the sphere of knowledge development, innovation and infrastructure. Finance Minister Hoekstra said that the fund might involve “tens of billions of euros over the longer term” and then press releases suggested about €50 billion. Projects for this “future fund” will be detailed in early 2020. Both projects are potentially positive developments for addressing supply-side challenges, but they are unlikely to provide any meaningful support to aggregate Eurozone demand.

The so-called Budgetary Instruments for Convergence and Competitiveness (BICC), which recently got the green light from Ecofin, are not a solution. The instrument will support both structural reforms and public investment in the form of grants, i.e. direct financial contributions, with funds taken from the Multiannual Financial Framework, which is not truly a European budget. European funds will require a minimum national co-financing rate set at 25% of the total cost of the investment. The allocation of funds within the EU budget is supposed to be only about 0.1% of GDP. BICC will become useful devices for structural reforms and investments, but they are a false dawn for Eurozone fiscal capacity or fiscal expansion as they are not designed to play any role as countercyclical tools.

Second option: a suspension of the rules

European leaders and the Commission could agree on a suspension of the rules. The existing Regulation provides for a possible “waiver” from any adjustment in case of an “unusual event outside the control of member States […] which has a major impact on the financial position of the general government or in periods of severe economic downturn for the euro area or the Union as a whole”.

This is a sort of nuclear option, which could be activated only in extreme situations. It would probably take another severe recession or a substantial external shock (US trade sanctions?) to move in that direction. In any case, there would be no guarantee that the Member States faced with the opportunity to go for fiscal expansion would take advantage of that possibility, as the trade-off between stabilisation policies and debt sustainability (correctly so) would become an important issue, especially in high-debt countries (Italy).

Finally, Eurozone leaders may decide to introduce a Euro-wide central fiscal capacity, together with a safe asset, to allow the economic area to activate counter-cyclical policies and alleviate the zero-lower bound constraints on monetary policy. This would be the most controversial and politically difficult move. It could only be achieved as part of grand bargaining that makes a significant step towards economic and fiscal integration. Building up any form of fiscal capacity remains the most controversial step. For now, it is only part of a big dream book.

The bottom line is that no fiscal expansion appears to be in sight. Despite the call by many economists and the backing of the Commission and the European Central Bank, European leaders are not going to take any of the above routes that may lead to a more accommodative fiscal stance in the Eurozone. Leaving aside structural issues, which may well prolong the current economic weakness into the medium term, the policy mix is also a negative that will most likely contribute to withdrawing oxygen from the Eurozone economy over the near term.

Lorenzo Codogno – LSE, European Institute
Lorenzo Codogno is Visiting Professor in Practice at the LSE’s European Institute and founder and chief economist of his own consulting vehicle, LC Macro Advisors Ltd. Prior to joining LSE, he was chief economist and director general at the Treasury Department of the Italian Ministry of Economy and Finance (May 2006-February 2015). Throughout this period, he was head of the Italian delegation at the Economic Policy Committee of the European Union, which he chaired from Jan 2010 to Dec 2011, thus attending Ecofin/Eurogroup meetings with Ministers. He joined the Ministry from Bank of America where he had worked over the previous 11 years. He was managing director, senior economist and co-head of European Economics based in London. Before that, he worked at the research department of Unicredit in Milan. 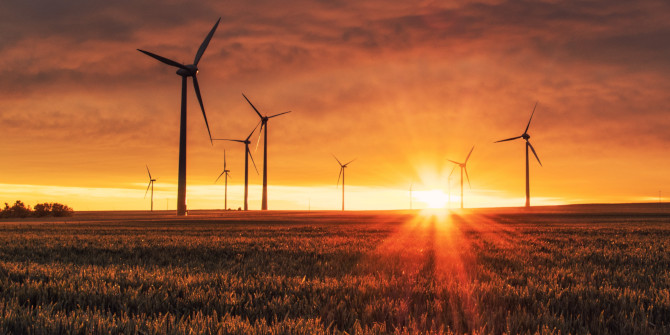 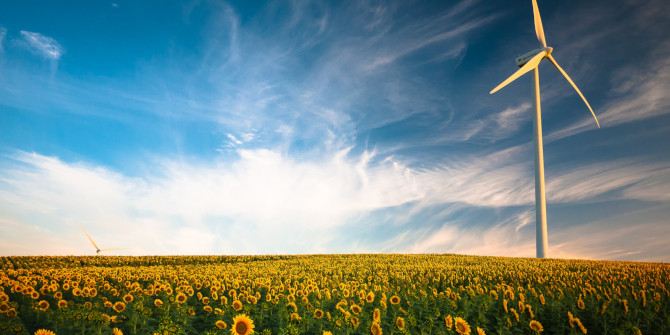