An investigation published by the New York Times has raised concerns about the misuse of EU Common Agricultural Policy funding in several states in Central and Eastern Europe. Kira Gartzou-Katsouyanni and Philip Schnattinger argue that although the report should be welcomed, it provided a misleading impression of the wider issues with land distribution in post-communist Europe. The misuse of EU funds should be viewed as a symptom of underlying corruption, not a cause.

A recent investigation by the New York Times on the misuse of Common Agricultural Policy (CAP) funds has sparked intense discussion. The report presents a damning indictment of the CAP, which is accused of “emboldening strongmen, enriching politicians and financing corrupt dealings” in Central and Eastern Europe.

Investigative reporting on the EU’s affairs should be welcomed and can make a major contribution to a healthy European democracy. The article raises two important points that we agree with: first, that the move towards more national flexibility in CAP 2021-2027 is a mistake; and second, that the EU needs to become more pro-active and more effective in tackling corruption involving EU funds – all types, not just CAP funds. This is by no means a new problem, and it’s high time the EU’s institutions learned to address it effectively.

However, there are notable problems with some of the conclusions that the article reaches. The most significant is that it is profoundly misleading to implicitly attribute the corrupt distribution of state-owned land in post-communist Europe to the CAP. The spread of a “modern twist on a feudal system” in parts of Central and Eastern Europe today is tied to the transition from communism. Under the influence of the shock therapy doctrine and other home-grown and imported neoliberal ideas, surprisingly little thought was devoted during the transition to how newly devised property rights could be distributed in a just and effective way. This original sin underlies the corruption and crony capitalism observed in post-communist Europe today, and abolishing the CAP will not solve the problem. The CAP subsidises the farm sector, but how the farm sector is articulated and how land rights are defined is a national political decision.

For all its problems, the CAP performs a vital function in many countries, namely to help keep rural areas alive and prosperous. Even for those who do not consider this aim to be worthy in its own right, rural areas matter immensely in political terms, and their further decline would have major political ramifications. Since the 1990s, the CAP has been reformed in consequential ways, moving from what was essentially an inefficient model of state planning, to a model of regulating capitalism in a sector that suffers from major market failures.

The shift from subsidising uncompetitive products that often went to waste, to supporting modernisation efforts in high value-added agri-food sub-sectors, has made an important difference in countries like Greece, where the benefits are dispersed to a greater degree because land ownership is not very concentrated. For example, the CAP provides a facilitative institutional framework that encourages collective action among owners of small firms and small farms, something that is of crucial importance for enhancing the competitiveness of local agri-food products in countries with fragmented ownership structures.

The article also states that “the European Union spends three times as much as the United States on farm subsidies each year”. As there is no reference in the article, we are not sure where this claim comes from. As shown in the below figure based on OECD data, the statement is misleading: the EU does spend substantially (but less than three times) more than the US on producer support, but the US spends a lot more on consumer support, bringing the total US spending on agricultural support close to the EU level. This difference decreases further if one considers agricultural support as a percentage of GDP. Furthermore, protectionist policies favouring US farmers are on course to overtake the corresponding EU policies. The US also spends massive amounts subsidising agriculture, these also disproportionately reach large farmers, and some of the biggest amounts are spent on subsidising corn, soybeans, wheat, cotton, and rice.

Figure: Total agricultural support and producer protection in the EU and United States 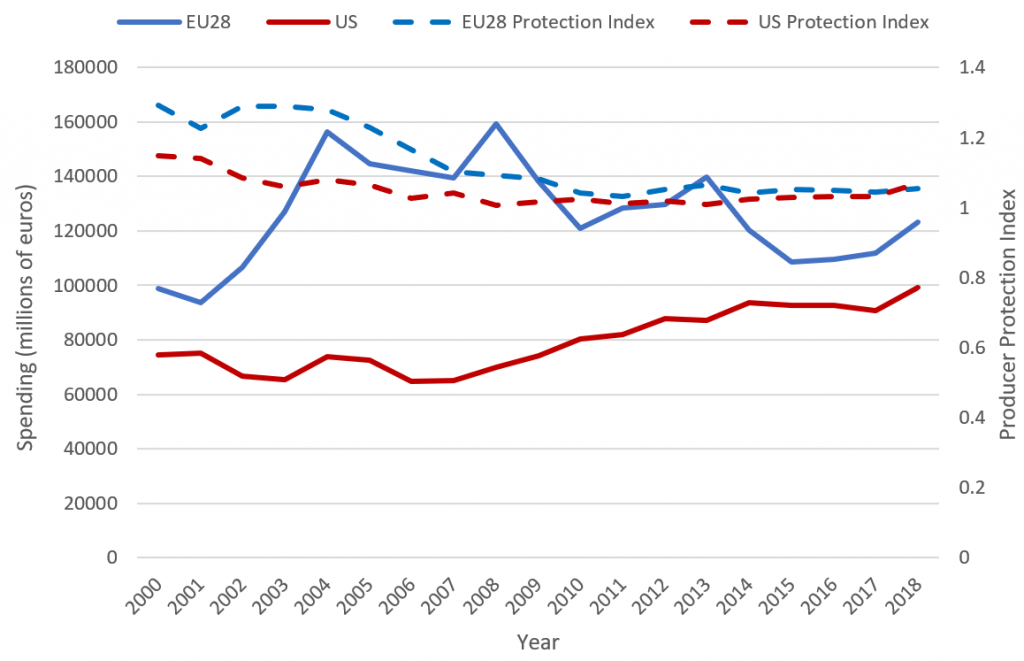 Our own view is that it is right to have agricultural subsidies, but that policymakers should think very carefully about where to spend them and what incentives to create. Our impression is that in the last three decades, the EU has thought hard about these questions, perhaps even more so than the US federal government: an observable implication of this is that consumers in large European cities usually find a better and more affordable supply of quality agri-food products than consumers in US cities.

In short, post-communist Europe faces massive issues of corruption and inequality, but the corrupt use of CAP funds is not the cause: it’s just one symptom. Closer oversight by the EU should be part of the solution, up to a certain point that remains compatible with the sui generis character of the EU as a multinational union. However, the oversight of EU spending can only ever scratch the surface of the real problem, which stems from the distribution of property rights. In Eastern Europe, fundamental domestic reforms are needed.

Note: This article gives the views of the authors, not the position of EUROPP – European Politics and Policy or the London School of Economics. Featured image credit: Amy Nelson (CC BY 3.0)