Recently, the Swedish Security Service, SÄPO, urged public agencies and industry to be more vigilant in contacts with individuals from Russia and China. According to SÄPO, both countries “use methods and laws that allow them to demand from all their citizens and companies that they assist the state with information”.

The key phrase here, of course, is ‘all’ as in ‘all their citizens’. This piece of advice goes against the grain of popular understanding of authoritarian regimes, which tends to assume that ordinary contacts with individual professionals are relatively free and unaffected by an authoritarian regime. What, then, can historical research tell us about post-communist states’ historical travel controls?

During the Cold war, much western contact with communist regimes was built on the assumption that everyday linkages would contribute to liberalisation. This assumption was the bedrock of the détente policy towards Eastern Europe during the Cold war, as well as contact and collaboration with post-communist China today.

However, recent historical research turns this assumption on its head. In the former East Germany (the GDR), travel controls ensured that only the most politically reliable individuals were allowed to travel to the West. Indeed, as Mikhail Gorbachev himself admitted in an interview with the historian Yale Richmond, ‘to go to the West, it was necessary to be ideologically irreproachable’.

From a domestic perspective, visits to the West were an exclusive privilege – one of many positive perks that propped up political loyalty to the regime. In the international arena, the system of travel controls enabled the regime to use individual travellers as mouthpieces and listening aids. In this sense, the travel control system constituted a unique type of state capacity in international competition. Importantly, by definition, only a non-democratic regime can screen, coerce and harness transnational contacts and communication in this manner.

How were the travel control systems of historical communist regimes organised? On this and many other questions concerning communist regimes, the East German archives give the best answers, since they are the most open and well catalogued for research. Since the East German administrative system was built on the Soviet template and under Soviet guidance, its design is indicative of the design of communist public administration across the world.

In East Germany, the system of travel controls was first formalised in the early 1960s, at the time of the construction of the Berlin Wall and the establishment of the iron curtain over Eastern Europe. Regulations became more detailed in the early 1970s and remained in place until the fall of the Berlin Wall in 1989. Indeed, by the late 1980s, the demand to travel freely was one of the core drivers of citizen revolt against the regime.

Archival research has unearthed the general regulations, issued by the Council of Ministers, as well as the sector specific ordinances, issued by the relevant ministry. The 1974 and 1982 central regulations covered all sectors of employment and societal organisations. The travel control system covered industry and commerce, the state administration and institutions of higher learning, including for example university professors, the medical profession, folk dance teams, truck drivers and bird watching associations.

The table below shows the bureaucratic procedure for travel controls for the sector of higher education in 1988. The same routines had been in place since the early 1960s, but in 1988, bureaucrats were discussing whether perhaps – in the future – the process could be further decentralised to the regional level.

Table: The administrative procedure of the travel cadre system for institutions of higher education in East Germany 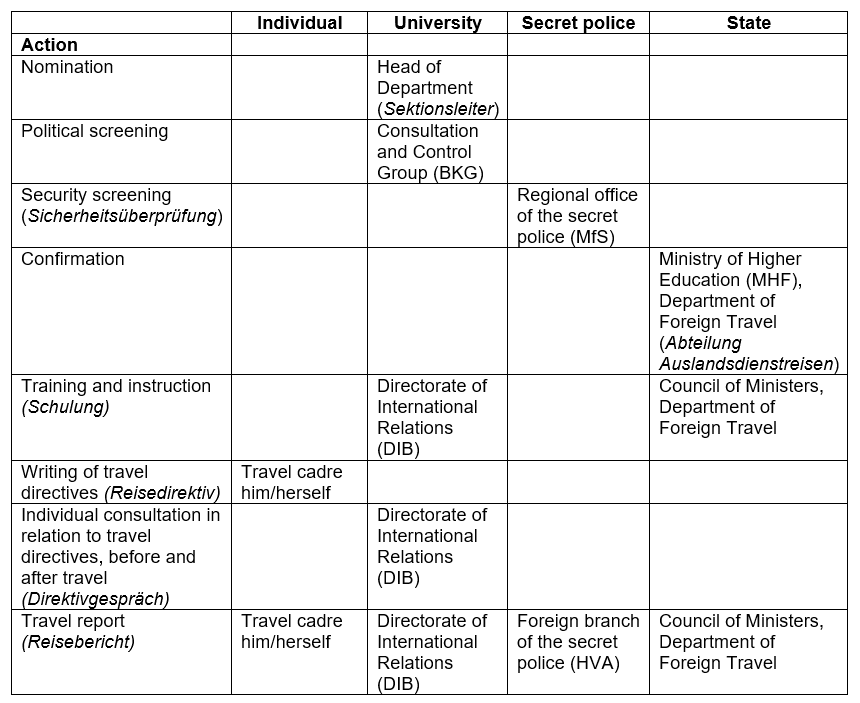 First, in order to travel abroad – for example to a conference or to visit western institutions – researchers had to be nominated for travel status by the head of their department or sector. In effect, the head of department assumed responsibility for the individual’s behaviour and political loyalty when abroad. The next step of screening for political loyalty was then conducted at the workplace, by a specially designated group, dominated by party officials. A core question would be whether the presumptive traveller and their closest colleagues were loyal to the ruling socialist party at work and in the line of their profession.

If the university level endorsed the prospective travel, the individual’s file was sent on to the regional secret police, the Stasi, for a standard three-month basic security clearance. For travel cadre, the security screening encompassed the individual’s behaviour in three spheres: the residential area, with neighbours; leisure time activities, in social circles, associations and clubs; and (again) the professional sphere, at work. The screening centred on the consistency of active political loyalty. According to the ordinance, the screening should focus on the presumptive traveller’s ‘bond to the societal circumstances in the GDR… in word and deed’ and require a ‘high level of political reliability’, to ensure that ‘a dignified representation of the GDR can be expected abroad’.

Before traveling, individuals were then coached in the correct political narrative that the regime wished to project to the West. These sessions were conducted both as group sessions for travellers to a specific country or region, such as the Scandinavian states, and as individual sessions, related to the written, individual travel directives which specified the institutions and individuals that the traveller would visit.

After returning to the GDR, the travellers had to submit written reports on the individuals and institutions with whom they had met – in effect, acting as the eyes and ears of the communist regime. These reports were to centre on how westerners viewed Soviet communism and the GDR. Were they watchful hostiles or friendly door-openers?

Today, we know that this aspect of the travel control system fed directly into the efforts of the communist regimes at technological espionage. Furthermore, communist regimes were interested in mapping political beliefs and opinions among influential individuals and institutions in the West, with the long-term goal to influence western political narratives, perceptions and public opinion.

Importantly however, the existence and design of the travel control system was an official secret and the travel regulations were classified. To the degree that travellers still managed to gain an insight into the organisation of the travel control bureaucracy, they were strictly forbidden to divulge the system’s existence to foreign citizens. But in general, travellers were not to know if, when or how they had been nominated or were being screened, or on which grounds travel had been granted or denied.

For more information, see the author’s accompanying paper in Cooperation and Conflict