Using recent survey data, Sergi Pardos-Prado explains that support for independence in Catalonia is strongly driven by education and language, and robustly associated with liberal sociocultural values. When it comes to the way forward, there is little consensus on the best outcome for Catalonia: those who favour independence are not in a majority, but those who oppose independence are split on the best alternative. However, a degree of consensus does exist on the process, with a large majority believing a referendum should be held to determine Catalonia’s future.

On 14 October, the trial of Catalonia’s independence leaders concluded with prison sentences ranging from 9 to 13 years. This sentence started a new phase in the conflict, sparking multiple protests across Catalan municipalities. The polarisation of the territorial conflict in Spain is crucial for understanding the unprecedented success of the radical right party Vox, which advocates the preservation of Spanish unity, a revisionist perspective on the Franco regime, and an ultra-conservative cultural agenda.

Despite the worrying escalation of events, the discussion of different political ways forward is notoriously lacking. This piece attempts to analyse the current profile of secessionist voters, in order to envision their motivations and potential paths for accommodation. I use data from the most recent barometer fielded by the Catalan Centre of Opinion Studies (including a random probability sample of 1,500 individuals representative of the Catalan population). Secondly, I analyse public support for two potential ways forward, namely a federal solution and a referendum of self-determination. More specifically, I focus on the level and distribution of support across different forms of national identity, in order to explore broader and less polarising coalitions.

Figure 1 depicts the level of support for an independent Catalonia across levels of monthly household income. The graph confirms that support for independence is lower among the poorest categories (€1,200 and below). However, the pattern is less linear than what is sometimes implied, showing significant support across a wide range of categories in the middle of the continuum: support for independence is right at or beyond 50% in households earning between €1,201 and €4,500. Secessionism goes down among some of the most well-off categories (€4,501-€6,000), only to pick up again in the richest category (above €6,000). 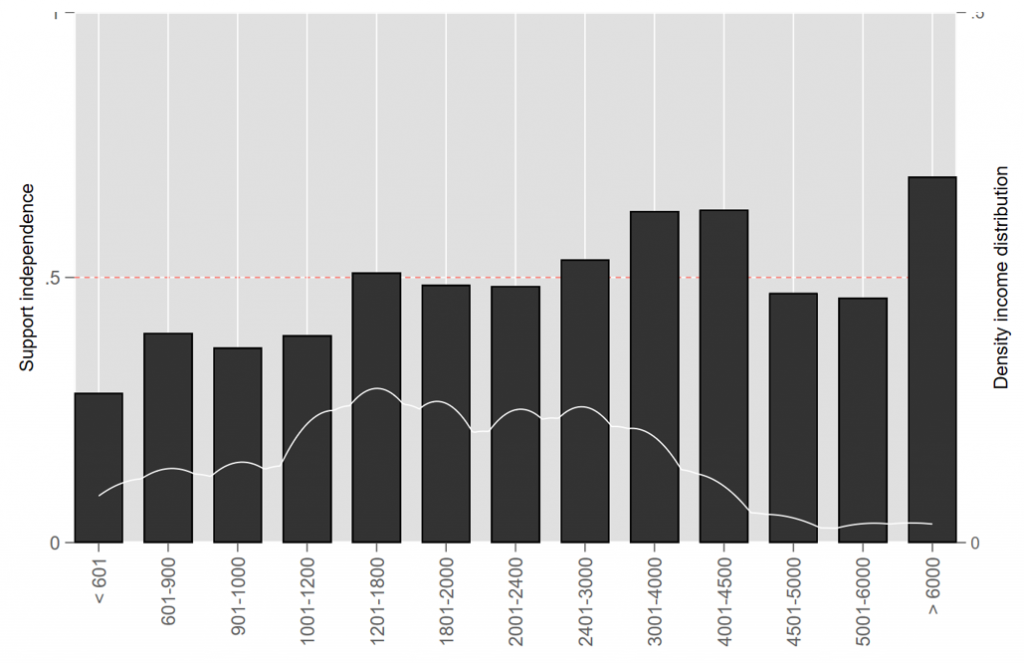 The relationship between secessionism and income is thus not perfectly linear, and tends to pick up at middle and middle-high levels of income. It would be a mistake, then, to characterise secessionism as a movement exclusively of ‘the rich’. Group size is a crucial factor to avoid this sort of individualistic fallacy (i.e. inferring group-level associations from individual-level data). Even if it is true that support for independence grows with income, the histogram depicted in Figure 1 shows that there is practically nobody in the richest categories, suggesting that the independence movement draws support from a range of highly populated and intermediate income categories.

Figure 2 shows that secessionism is predominant among the highly educated (secondary and university levels), who tend to have more liberal cultural values. In fact, support for independence is clearly stronger among people agreeing or strongly agreeing with the statement ‘gay couples should be able to adopt children under the same conditions as straight couples’ (Figure 3). Secessionism also correlates strongly with pro-immigration attitudes, and is majoritarian among those who disagree or strongly disagree with the statement ‘With so much immigration, one doesn’t feel like at home anymore’. The educational and attitudinal profile of the secessionist voter is thus a mirror image of many radical right electorates in Europe, questioning the anti-liberal and supremacist characterisation of the movement. It is also true that a full analysis of its nativist character should include attitudes towards groups coming from other Spanish regions. 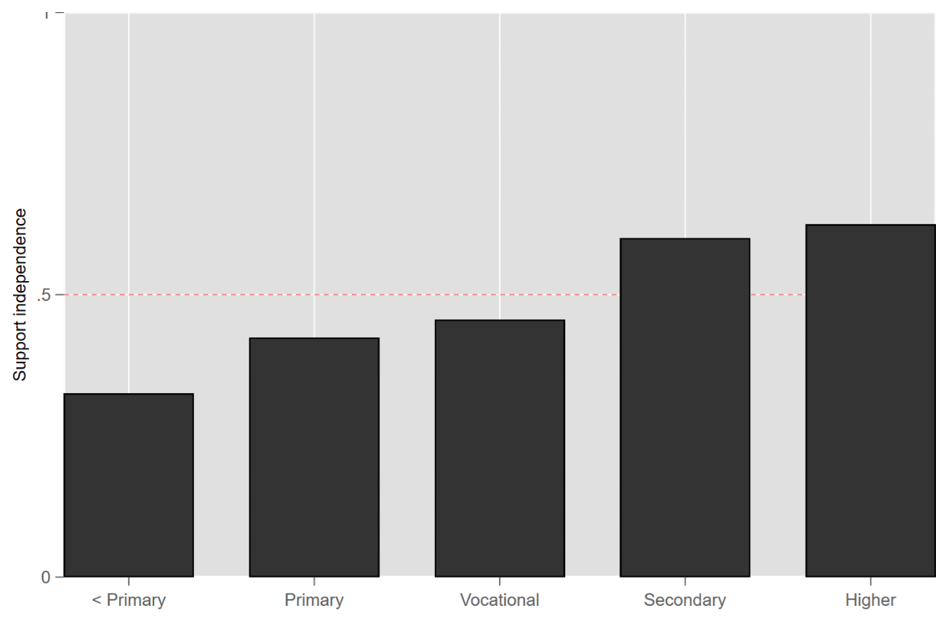 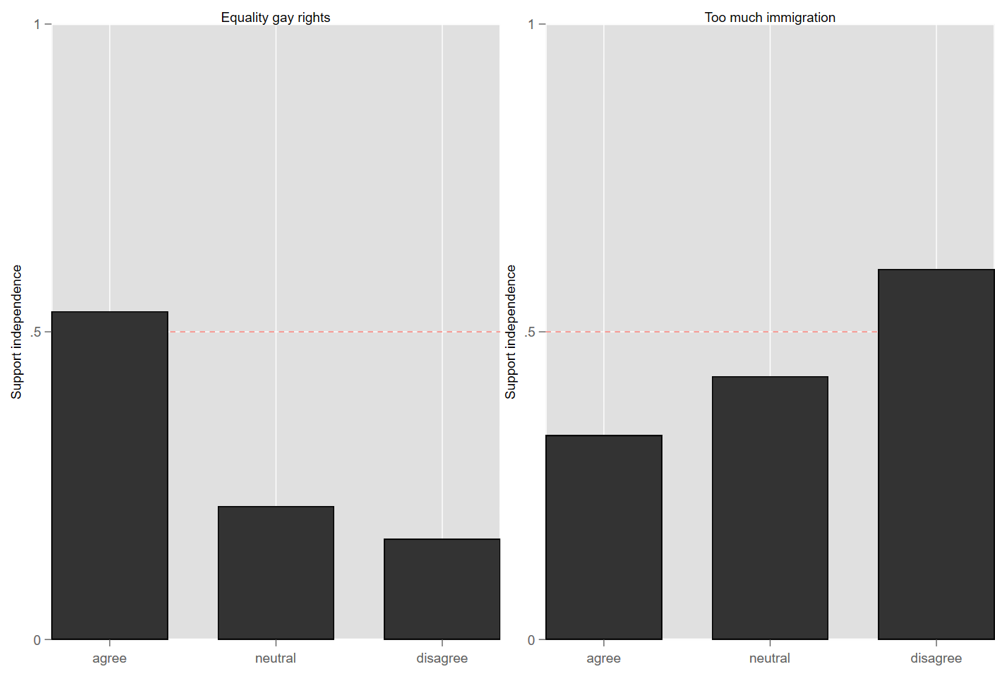 Figure 4 summarises the statistical effect of some key predictors and their 95% confidence intervals (on the basis of linear probability models with support for independence as the dependent variable). The left panel shows that the effect of income disappears when controlling for other confounders, questioning the causal effect of economic motivations. Education and the most frequently used language are the most significant predictors. The effect of language is particularly strong, with individuals speaking only Catalan or both languages being more likely to support independence than Spanish-only speakers.

The right panel of Figure 4 adds anti-immigrant and anti-LGBT attitudes, which are strongly and negatively associated with secessionism. The effect of education becomes insignificant, suggesting that education is driving liberal sociocultural values. The point is not to prove any causal relationship between liberal values and secessionism, but to show that they are strongly associated. 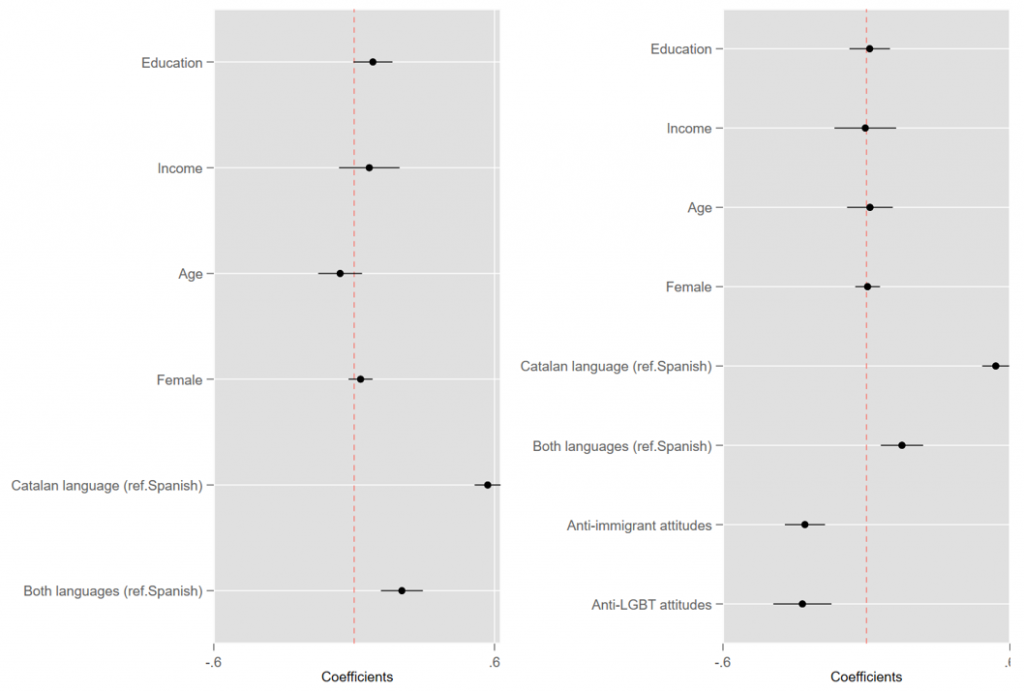 Support for federalism and self-determination

There are two canonical paths forward in contexts of polarised centre-periphery conflicts: a federal arrangement and a referendum of self-determination. Figure 5 shows the level of support for different state forms (left panel) and the agreement with the statement “Catalonia has the right to hold a referendum of self-determination” (right panel). When looking at support for different state forms, none of them is close to reaching a clear majority. However, support for an independent Catalonia is the strongest plurality (around 40%). This sheds light on the reasons behind the current stalemate: secessionists are not a majority, but non-secessionists are split on the best way forward. Each single option on its own (back to being just a region, keeping the current status quo, or enhanced federalism) garners less support than independence.

Figure 5: Support for different state forms and an independence referendum 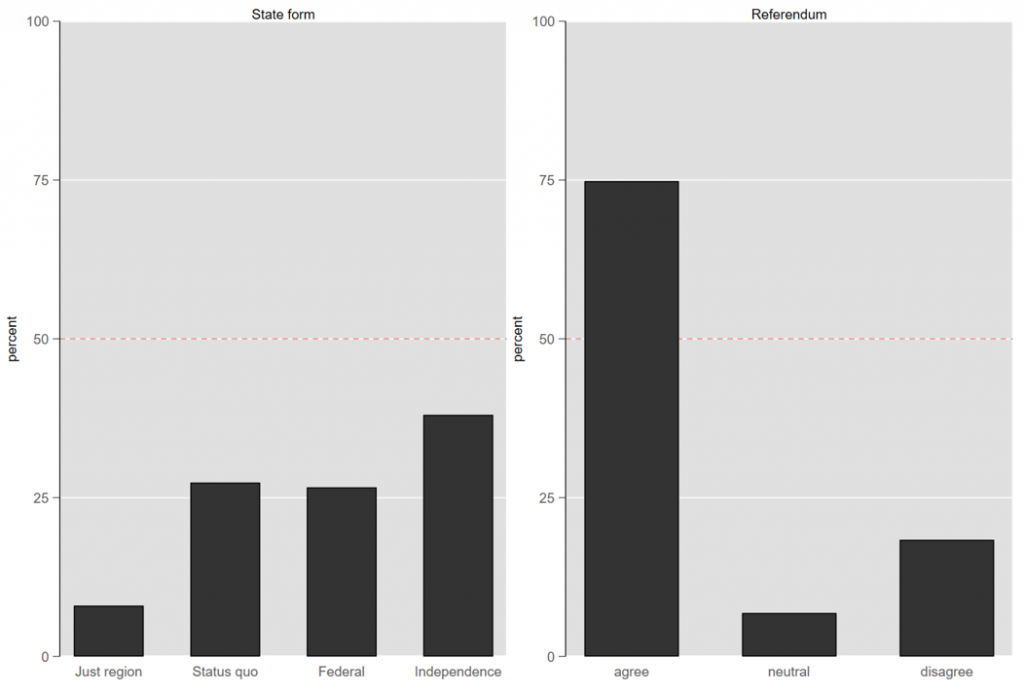 The right panel of Figure 5 reveals the only super-majority in the range of preferences analysed, namely the agreement or strong agreement with the right to hold a referendum (75% of support). The comparison between support for different state forms and a referendum is not fully accurate, since the referendum is asked in a question on its own, and the state forms are different options in a single survey question. It is therefore likely that some respondents agreeing with a referendum do not see it as their first option, even if they are ultimately fine with it.

Figure 6: Support for federalism and an independence referendum across national identities 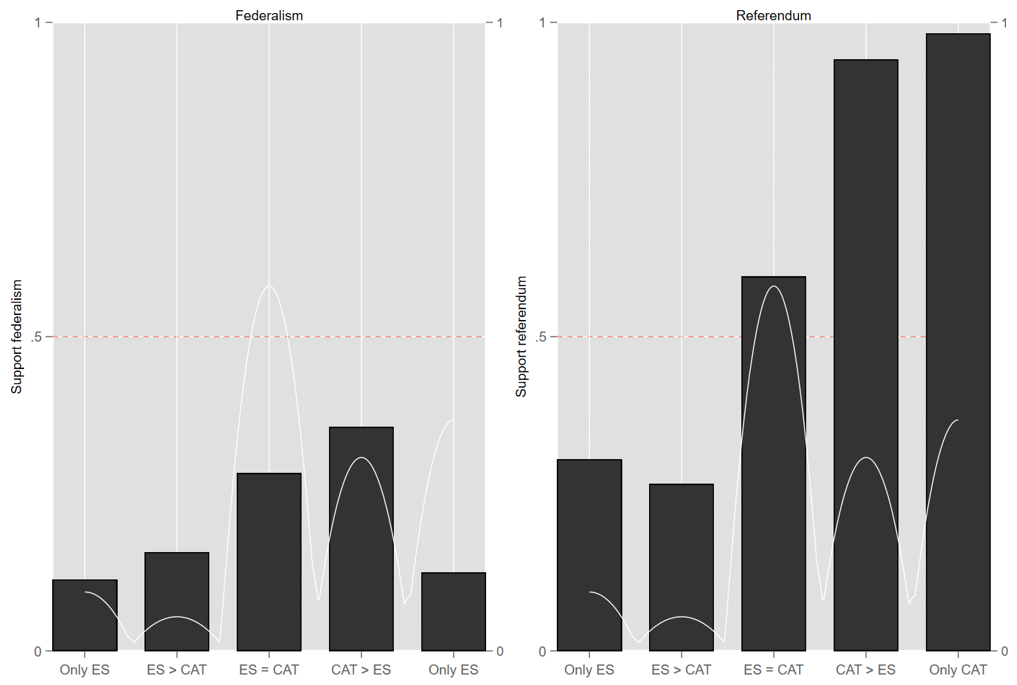 Figure 6 disaggregates the support for a federal solution and for a referendum across different types of national identity. The left panel shows how support for federalism is bigger among intermediate identities (feeling as Spanish as Catalan, and more Catalan than Spanish), even if it falls short of the 50% threshold across the whole identity continuum. By contrast, support for a referendum seems to garner a larger and broader coalition among the most populated identities: clearly above 50% among people feeling as Spanish as Catalan (the most populated category), and close to 100% of agreement among people feeling more or only Catalan. The coalition supporting a referendum only leaves out people who feel more or only Spanish, constituting 3.87% and 6.68% of the electorate respectively.

In conclusion, support for independence in Catalonia is strongly driven by education and language, and robustly associated with liberal sociocultural values. The positive effect of income is not perfectly linear, and disappears when controlling for other sociological confounders. The only super-majority able to bridge identity divides across the most populated sections of the electorate is found when measuring support for a referendum of self-determination. Given the lack of consensus on the final outcome of the relationship between Catalonia and Spain, perhaps more efforts should be devoted to re-focus the debate on the method to solve this conflict, which seems to attract stronger and more diverse coalitions of support.

Note: This article gives the views of the author, not the position of EUROPP – European Politics and Policy or the London School of Economics. Featured image credit: Joan Morejón / Assemblea.cat (CC BY-NC 2.0) 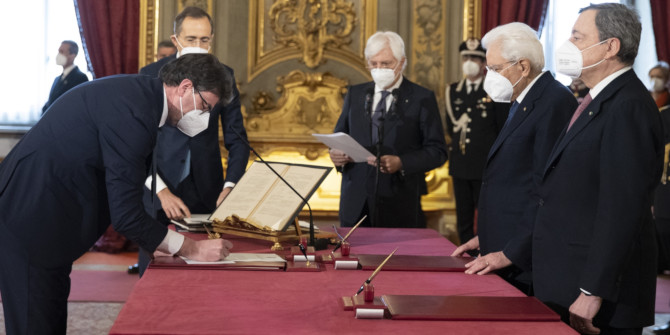 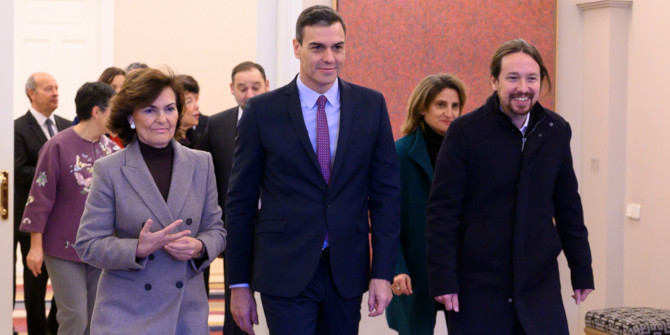 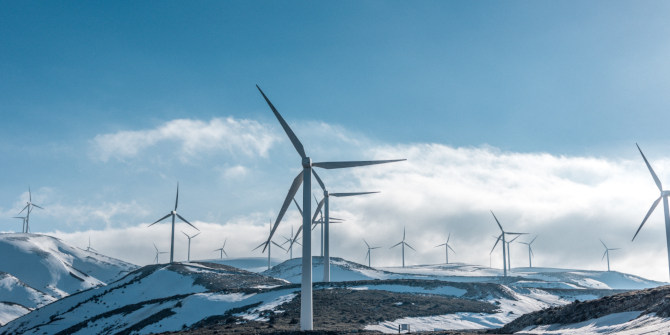