Political parties play a crucial role in enabling the views of citizens to be represented in political decision-making. Yet across Europe, the vast majority of citizens no longer actively participate in political parties, with party membership numbers experiencing a sharp fall in recent decades. Drawing on a new edited volume covering the Nordic countries, Marie Demker, Knut Heidar and Karina Kosiara-Pedersen explain how parties might continue to link citizens with politics, despite the fall in membership numbers.

In the Nordic countries, as in many other established democracies, there has been a rise in the number of political parties competing in elections in recent decades. Yet this has coincided with a period in which parties have suffered a loss of members. A new edited volume we have compiled assesses whether despite this fall in party membership numbers, members still provide Nordic party democracy with the kind of linkages between the electors and the elected that can support a sustainable democracy. The book is based on party member and voter surveys conducted between 2012 and 2017.

Party membership figures are in a general state of decline. Only between 3 and 5 per cent of voters in Denmark, Finland, Norway, and Sweden are registered as traditional dues-paying party members today. However, Iceland stands out from the overall Nordic trend, with rising numbers of party members since the 1990s and a current level of 30–40 per cent of the electorate enrolled as members.

Figure: Party membership figures as a percentage of the electorate in the Nordic countries 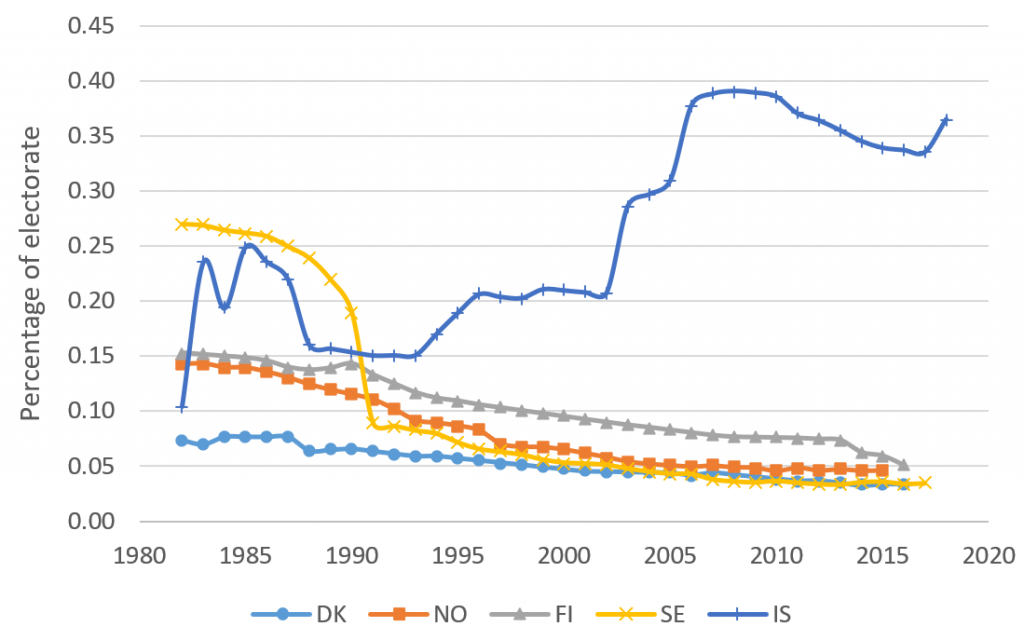 The obvious explanation for this Icelandic exceptionalism is that the mass party never took root among Icelandic parties, and many of their members only join to select party candidates at public primaries, rather than to participate in party events. This American-style of party affiliation, as well as the introduction of primaries, has no doubt helped to foster greater reach for Icelandic parties in comparison to the other Nordic parties. The incentives to join parties are primarily linked to ideology and political interests. This is particularly the case for smaller parties that are tailored toward niche interests and special issues.

The social and ideological profile of party members is a key indicator of how well parties are anchored socially and politically in society. There are large differences between the social profiles of the individual parties. However, members of individual parties largely mirror the profiles of party voters. Exceptions are that men are over-represented in nearly all parties, especially in the parties on the right, and party members have higher education levels than the party’s voters. But apart from gender and education, most parties have a high or medium level of similarity with their voters.

Members and voters are also by and large in agreement on their ideological preferences. Comparing candidates and members, there seems to be more variation, with candidates from all parties in Denmark and Norway placing themselves to the left of their party’s members. There is no systematic evidence in the Nordic countries for the theory (often referred to as ‘May’s law’) that a party’s members will hold stronger ideological views than the party’s voters or its leadership. However, some parties do have members with more extreme ideological preferences. Party members do not seem to distort the political interests and policy positions of party voters.

Members in the different party families basically agree on issues they care about, but they are more diverse on issues that are not so central to the party (but which may be central to other parties). For example, social democrats are cohesive on economic issues, but not on the new issues of immigration and the environment, while radical right parties are cohesive on immigration, but divided on left-right issues. Parties at the extremes of the political spectrum are the most cohesive.

Overall, despite declining membership, Nordic political parties are representative of their voters along both descriptive and political dimensions. Membership profiles signal clear political alternatives to voters. Party membership linkages are small but not seriously skewed with regard to either descriptive or substantive representation.

Membership figures have traditionally been the gold standard for measuring parties’ participatory linkages. This rests on the premise that signing up for membership actually indicates member activism within and for the party. However, not all members are active, and among those that are, party activism varies in degree, type, and quality both within and among parties and over time. About four out of five members in the Scandinavian parties are active; one in five is not.

Our analysis of patterns in member activism identified three main dimensions of activism. First, there are ‘party workers’, who are characterised by a broad range of activities such as attending meetings, campaign activities, influencing policies, and holding office. This dimension is important in linking the party with civil society. Second, there is a ‘veteran’ dimension that captures members who have held party or public office in the past. Third, there is a ‘party ambassador’ dimension covering party activities directed at voters, such as encouraging them to vote for the party and to discuss party policies with non-members.

The chain of representation within parties is connected to demands for intra-party democracy. When members and candidates disagree on ideology and policy issues, there tends to be more demand for members having a say over internal party decision-making. The demand for intra-party democracy is greater among party members who are somewhat out of line with the mainstream party, which indicates that there are likely to be policy implications when party members are given a stronger say.

If parties choose to enhance their party membership linkages with higher levels of intra-party democracy, it is likely that those who are more at odds with party policies will make use of these new privileges. However, political disagreements are also linked to exit considerations: those members who are out of line with the mainstream party may choose to leave the party rather than exert greater influence over internal party decision-making. Both exerting a greater say over party decision-making and leaving the party are feasible options for members in this position.

In sum, party members seem sufficiently satisfied with the level of intra-party democracy and the extent to which this allows party membership linkages to work. We may also note, however, that there is some variation among members and parties. In parties where the leadership exerts a high level of control, those members who are demanding and hold political opinions that are distant from the party’s ideological position are likely to be dissatisfied. On the other hand, members who have relatively low expectations about their ability to influence party decisions and who feel close to the party’s ideological position are bound to be more satisfied. In both of these cases, the level of satisfaction is likely to hold true regardless of the formal rules that regulate members’ influence.

The Nordic countries are old, well-anchored party-based democracies. They are more or less built on the principle of parties providing democratic linkages by aggregating and articulating voters’ interests, and through the engagement of members in party organisations. The Nordic countries, and in particular the three Scandinavian countries, are similar but not identical systems, and they are not exceptional cases compared to other European countries even if the Nordic parties’ participatory linkages have developed in rather favourable conditions. Hence, useful lessons may be drawn from the Nordic comparisons.

As parties adapt, they will be able to meet the challenges posed by the decline of traditional membership. Parties are crucial in maintaining Nordic parliamentary democracy, and – if threatened – will most likely meet the changing social environment with reorganised forms of membership. Linkages can be provided through candidate nomination processes and campaigning, even in parties that have very few members and a lack of intra-party democracy, as well as in parties with high numbers of staff and a high level of professionalisation.

The important question is whether and how party adaptation will include the participation of members and supporters, and the linkages to civil society that they provide. Intra-party democracy and participation are not necessary requirements for representative democracy, but if party systems lack channels of influence and participation, it may challenge long-term interests, democratic satisfaction, external efficacy, and political trust.

In the long run, the link between citizens and parties is crucial for the vitality and sustainability of democracy. It is only through the articulation, formulation, and development of policies aimed at addressing social problems that parties can offer voters real political alternatives. If parties view citizens simply in terms of the collective average of their opinions, rather than as individuals they must engage with, then politics as we know it will cease to exist. This type of politics may prove more interesting as a spectacle, but if will be far less effective when it comes to solving societal challenges.

Note: This article gives the views of the authors, not the position of EUROPP – European Politics and Policy or the London School of Economics. Featured image credit: Dany Sternfeld (CC BY-NC-ND 2.0) 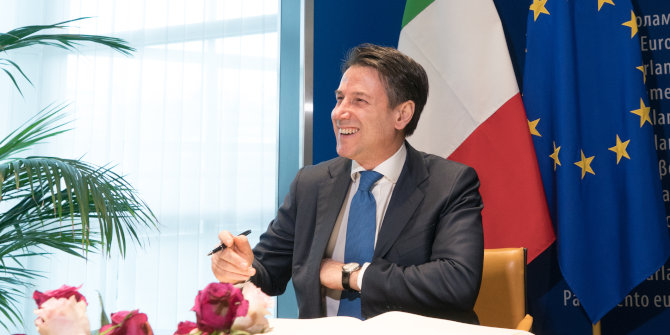