Vox won the third largest share of the vote in Spain’s general election in November. But is the success of the party a temporary phenomenon or a sign that populist radical right parties are destined to become a permanent feature of the Spanish party system? Lisa Zanotti and José Rama write that while political resentment and the Catalan independence issue created fertile ground for Vox, the party may find its future growth limited by the resilience of the left-right political cleavage in Spanish politics.

Even if the picture varies substantially between individual European countries, it can be said without doubt that populist radical right parties have become both more electorally and politically relevant in Europe and beyond. In some countries, this party family has achieved representation in the national parliament, while in others, they have entered government. Populist radical right parties have been coalition partners in a great number of countries (Denmark, Norway, Austria, Belgium and Finland) and have even been the major players in several governments (Poland, Hungary and Italy). Populist radical right leaders have also found success outside of Europe, notably in the United States and Brazil with the election of Donald Trump in 2016 and Jair Bolsonaro in 2018.

Spain, together with Portugal, was one of the few exceptions to this phenomenon. However, this Spanish exceptionalism came to an abrupt end in December 2018 during snap regional elections in Andalucía. In this election, a newly-formed populist radical right party, Vox, obtained 11.1 per cent of the vote and 12 out of 109 seats in the regional parliament. This electoral success was repeated during the latest regional elections in May 2019: out of the 12 autonomous communities that held elections, Vox gained representation in 7 out of 12 (in Madrid and Murcia it can be said that Vox holds a potentially pivotal role in the balance of power).

In April 2019, Vox manged to achieve electoral success also at the national level, obtaining more than 10 per cent of the votes and 24 out of 350 seats. As forming a government proved impossible following the April election, on 10 November another snap election took place. Vox increased its share of the vote by around 5 percentage points, becoming the third large party with 52 seats.

The success of Vox raises the question of why populist radical right parties are becoming more relevant. Explanations of this phenomenon can be divided into three broad groups. First, some scholars have pointed to the economic downturns that most European countries experienced following the 2008 financial crisis. In line with economic-voting theories, good times keep parties in office, while bad times cast them out.

Thus, in this case, the parties that benefitted from the negative economic circumstances were those on the fringes of the party system. This is stated to be true for those countries that experienced a harsh recession. However, in those countries in which the economic consequences of the crisis were not as severe, such as Switzerland, Austria and the Netherlands, economic explanations don’t seem to be as relevant for understanding the phenomenon.

The second group of explanations makes reference to cultural issues. These theories, which represent perhaps the most popular group of explanations among scholars, assert that globalisation and multicultural expansion are key to understanding the success of the populist radical right. Finally, a third group of theories links the success of populist radical right parties to the failure of traditional parties to respond to voters’ interests and policy preferences.

Whichever explanation is adopted, the success of the populist radical right has resulted in parties competing across different issues, such as European integration and immigration. In Spain, at least until now, this has not happened. If we observe Figure 1, we can see that the logic of party competition is still primarily focused on the traditional left-right divide, and, although electoral competition has focused on issues related to historical memory (such as the exhumation of Spanish dictator Francisco Franco), feminism or territorial organisation (the Catalan conflict), all of these issues have been framed alongside the left-right continuum.

As a consequence, after the November 2019 general election, the social democratic PSOE and the leftist populist Podemos formed a coalition. This coalition was a clear result of the failure of the liberal Ciudadanos and PSOE to reach an agreement after the previous elections, largely due to the two parties holding different positions on the centre-periphery issue.

Note: The image on the left represents support for parties on the left (PCE/IU, Podemos and PSOE), with the figure on the right representing support for parties on the right (UPyD, AP/PP, Vox, CDS and Ciudadanos). There were two general elections held in 2019: 2019a refers to the April 2019 election, while 2019b refers to the November 2019 election. Figure compiled by the authors using data from http://www.infoelectoral.mir.es/infoelectoral/min/

Another important insight from Figure 1 relates to the notable party fragmentation that has occurred in recent elections. As we can observe, since 2015, fragmentation has primarily taken place on the right side of the ideological spectrum. This is a novel development in comparison with the elections that took place from 1986 until 2011, where the major conservative party, the People’s party (PP), did not have a relevant political opponent on the right of the party system.

The reshaping of the right

In 2015, the People’s Party met its first new opponent. Through a discourse that mainly focused on corruption scandals, as well as the threat for representative democracy that they entail, Ciudadanos emerged first in Catalonia and then at the national level as a ‘new’ centre-liberal party. However, although most of their voters were ex-PP supporters, its emergence failed to have profound and lasting electoral repercussions for the PP. In both the 2015 and 2016 elections, the conservatives managed to continue to attract the largest portion of voters on the right of the ideological spectrum, and in 2016 they were even able to win back those voters that in 2015 moved to Ciudadanos.

Due to its anti-decentralisation discourse and opposition to the Catalan secessionist process, the PP managed to gain seats between the two elections held in 2019 (from 66 seats in April to 89 seats in November). Moreover, Vox, by intensifying its nativist and anti-Catalan independence discourse, managed to put an end to the short period of Ciudadanos’ electoral success. In the April 2019 elections, Ciudadanos were the third-largest party, obtaining almost 16 percent of the vote, but this slipped to just 6.8 percent of the vote in November as Vox underlined its stance against regional autonomy and advocated for a completely centralised nation.

Figure 2: Left-right ideology and issue competition among the supporters of Spanish political parties 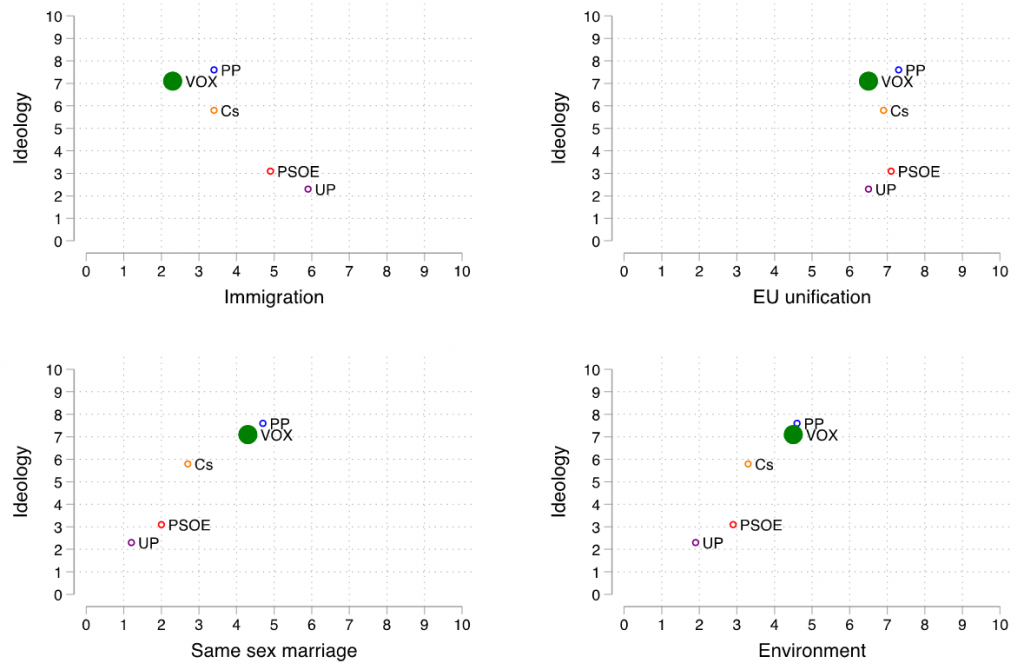 Although the leaders of Vox have underlined the perils of immigration, expressed doubts over the veracity of climate change science, and emphasised the defence of traditional values, the truth is that their voters do not appear to differ in a substantive way on these issues from those who have voted (and still vote) for the PP.

For example, in terms of support for restrictive policies toward immigration, both Vox and PP voters place themselves close to one another, with supporters of Unidas Podemos (UP) and PSOE the most likely to be “fully opposed to restrictive policies for immigrants”. The story is the same for the rest of the charts in Figure 2: Vox supporters are not necessarily the most anti-EU, the most hostile to same sex marriage, or the most anti-environment voters in the electorate, as they place very close to the PP on these issues.

Thus, if the traditional left-right social cleavage keeps structuring the Spanish party system, mainstream parties will most likely be able to keep strong ideological and partisan links with voters, which will have implications for the future of Vox. If the PP continues to satisfy the ideological and policy preferences of the conservative Spanish electorate, it might well function as a barrier for further Vox gains, limiting its potential for electoral growth in the future. Put simply, if the electorate remain firmly entrenched in the traditional pattern of left-right electoral competition, populist radical right parties will find it extremely difficult to establish themselves.

The recent electoral success of Vox can mostly be explained as a function of political resentment and the intensification of the centre-periphery conflict in Spanish politics, motivated by the Catalan secession process. However, so long as Spanish electoral competition remains a left-right game, the room for the populist radical right may prove to be decidedly limited in the long-run.

Lisa Zanotti and José Rama (along with Stuart Turnbull Dugarte and Andrés Santana) are the authors of an upcoming book, ‘VOX: The Rise of the Spanish radical right’, which will be published as part of the Routledge series on Extremism and Democracy. 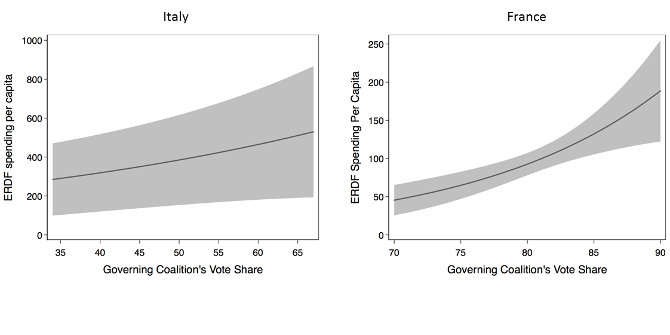