In Democracy Beyond Elections: Government Accountability in the Media Age, Gergana Dimova examines the impact that the rise of the media age has had on government accountability, focusing on the cases of Germany, Bulgaria and Russia. This is an important and timely contribution to the revitalisation of democracy studies, writes Georges Kordas, and shows how accountability can be a tool for citizens but also wielded by those in power. 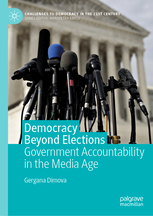 Democracy and its attributes have been a growing topic since the beginning of the 1990s. Post-communist democratic transition offered researchers the chance to observe how new-born democracies could manage their institutions and responsibilities. Despite the comparative perspective of such research, it was primarily focused on elections and party politics, missing democracy’s internal challenges, like the emergence of the ‘media age’ and the high public expectations of government accountability. Indeed, the ‘media age’ frames the period covered by the book under review, Democracy Beyond Elections: Government Accountability in the Media Age, highlighting the plethora of opportunities and challenges that have been created as a result of the rapid technological progress in the communications industry (32).

Gergana Dimova’s Democracy Beyond Elections appeared in the midst of dramatic debates in the US regarding the impeachment of President Donald Trump. The book focuses on government accountability in democratic states under media pressure. The book’s front cover reflects its content: in the blurred background, we observe a building, perhaps a parliament, while in the foreground there are some microphones, ready to capture a politician’s announcements.

The book consists of three parts and eleven chapters, and at their core is the problem of accountability. The introductory chapter defines the meaning of government accountability and its relationship with democracy and the media. Dimova considers this relationship a problematic one, especially given the consequences of media allegations for government accountability. She offers us a novel approach to the study of democracy, covering both the supply and demand sides of accountability, having developed a ‘database of about 6000 media allegations’ (2) relating to three different democracies. This allows for case studies of the Western European democracy of Germany, the managed democracy of Russia and the transitional democracy of Bulgaria.

Dimova’s contribution to the field is connected with an alternative measure of accountability and the creation of a rich database and analytical codebook. In detail, her measure proceeds from the outcome of a regression analysis where the input variables are the prosecutor, the courts, the parliament, the president, the audit chamber and various government investigations, while the output variables consist of the resulting sanctions. The regression’s coefficients present the extent to which the input variables are imposing sanctions on the government. The results have been placed in an accountability pyramids model, which provides us with the opportunity to compare the balance of powers between traditional and novel mechanisms of accountability.

The empirical part of the book comprises three chapters, one for each country. The de-parliamentarisation of government accountability – the core of the German case – questions the ability of the accountability phenomenon to transform democracy. Dimova assumes parliaments are weak accountability forums nowadays, especially regarding media allegations. Nevertheless, as her findings present, political parties can affect government accountability in four ways: two concern the parties in opposition and two relate to the parties in government. Opposition parties are talented accountability players as they raise more than half of all accusations levelled at the incumbents in the media. At the same time, their popularity is a decisive factor, able to determine whether the government would dismiss an incumbent for corruption. Parties in government represent a category of essential accountability players as both their internal party meetings and the government meetings between coalitional parties work as mechanisms for imposing sanctions in relation to media allegations.

The concluding empirical chapter focuses on the judicialisation of the accountability process in Bulgaria. Dimova highlights the importance of the general prosecutor and the courts in government accountability, although she acknowledges that judicialisation has both positive and negative effects. The positive effects strengthen transparency in public discourse and public access to the accountability process. At the same time, the negatives are related to the use of the prosecutor for elite interests.

This book can be read by both academic and non-academic audiences, as it situates government accountability in an era when the media performs such a significant role. Dimova shows not only how the fragmentation of public opinions has transformed the demand for accountability during the globalisation era, but also how democracy interacts with the media in a dense social grid. More specifically, she is interested in the supply and the demand sides of accountability and in highlighting those mechanisms that work for or against the accountability process.

Dimova’s research can be considered on two levels: first, as a contribution to the revitalisation of democracy studies; and secondly, as a book published at a critical time due to the developments in the US political scene and the empowering of populists in the name of democracy. As presented earlier in the volume, accountability can have both a beneficial and a utilitarian dimension. It can promote not only transparency in the public realm, but it can also be a valuable tool for populists. Despite the different dynamics presented by each case study, accountability can be used to serve those in power against their enemies or specific interests, in an ‘us vs them’ populist schema.

The only weakness of the study and, in parallel, a question for upcoming research, following Dimova’s train of thought, is the absence of a qualitative approach to accountability studies. Interviewing governmental actors and others could offer us the ability to delve further into perceptions of accountability in dissimilar types of democracies, building on Dimova’s contribution to the field.

Note: This article is provided by our sister site, LSE Review of Books. It gives the views of the author, not the position of EUROPP – European Politics and Policy or the London School of Economics. Featured image credit: Image created by Colleen Simon for opensource.com (opensource.com CC BY SA 2.0). 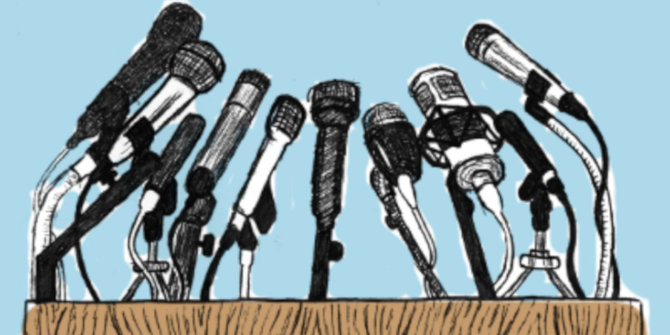