Every year, many businesses across Europe go bankrupt as a result of payment delays. For this reason, the EU established a Late Payment Directive in 2011. Maurizio Conti, Leandro Elia, Antonella Ferrara and Massimiliano Ferraresi assess the impact of the directive, finding it has had some notable positive effects for the financial position of firms. Given the strain many businesses are under as a result of the Covid-19 outbreak, it is now more vital than ever for policymakers to address the problem.

Payment deferrals in commercial transactions are widespread and represent a sizeable share of liabilities for non-financial corporations. Deferral is not per se harmful and there are several reasons why companies offer it. For instance, suppliers with high liquidity ratios can find it optimal to extend credit to their customers in order to gain market share against financially constrained rivals. Suppliers might have more information about their customers’ financial state than banks, which makes the provision of trade credit cheaper.

Moreover, deferrals on payments can follow suppliers’ need to hedge against cash-flow volatility. There is evidence that large and financially healthy customers can also benefit from payment postponements. As suggested by Murfin and Njoroge and by Barrot and Nanda, companies, but also governments, can exert their buyer power to obtain payment delays from smaller suppliers.

Chronic use of payment delays beyond the due date presents a major challenge particularly to financially constrained suppliers, exposing them to potentially severe liquidity risk. By increasing uncertainty, liquidity problems can jeopardise investment decisions, slow down employment growth and possibly drive firms out of the market. The 2008 financial crisis, and the subsequent sovereign debt crisis, likely magnified the financial burden of late payments. As economic turmoil increased, delayed payments might have contributed to disruption of regular operations, from marketing activity to payment of employees and suppliers.

Against this background, the European Commission adopted in 2011 the Late Payment Directive – an array of harmonised rules governing payment terms in commercial transactions – with the aim of enhancing certainty of payment terms and establishing consistent regulatory arrangements within Europe (2011/7/EU).

The Late Payment Directive implements a number of measures that can be grouped into five main points. First, it sets a 30-day target for payments made by public sector bodies to business. Second, the new regulation recognises contractual freedom in business-to-business transactions, i.e. enterprises have to pay their invoices within 60 days unless otherwise agreed. Third, businesses are entitled to claim interests for late payment and to obtain compensation for recovery costs. Fourth, the Late Payment Directive sets a statutory interest rate for late payment in all EU member states of at least 8 percentage points above the European Central Bank’s reference rate. Finally, EU member states lay down recovery procedures for undisputed claims so that enforceable titles can be obtained within 90 calendar days since the start of a creditor’s action or application to a court.

In a recent study, we assess whether enterprises have benefited from this new regulatory framework. In particular, we focus on business-to-government transactions and study the effect of the Late Payment Directive on key sector level indicators: firms’ exit from the market, employment and investment. The analysis is based on sector-level data for a sample of 24 European countries observed between 2008 and 2015.

We combine information on 38 two-digit sectors from several sources, including EUROSTAT’s Structural & Business Statistics, the OECD’s Structural Analysis Database (STAN), the World Input-Output Tables and the World Bank. We leverage exogenous variation in payment terms brought about by the Late Payment Directive to implement a difference-in-differences research design. We exploit sectorial variation in the intensity of “treatment” to identify the impact of the directive. We posit that sectors selling a salient part of their output to the government should have benefited more from the adoption of the new regulations.

The adoption of the Late Payment Directive is associated with lower exit rates in country-sector units that used to trade more with the government (Figure 1). To give a sense on the order of magnitude, the exit rate is reduced by about 0.7 percentage points if we consider a shift from a sector such as the Wholesale trade sector in Spain, whose share of sales to the government lies on the first decile of its distribution (0.861%), to Warehousing and support activities for transportation in Romania, whose share of sales corresponds to the ninth decile (9.573%). 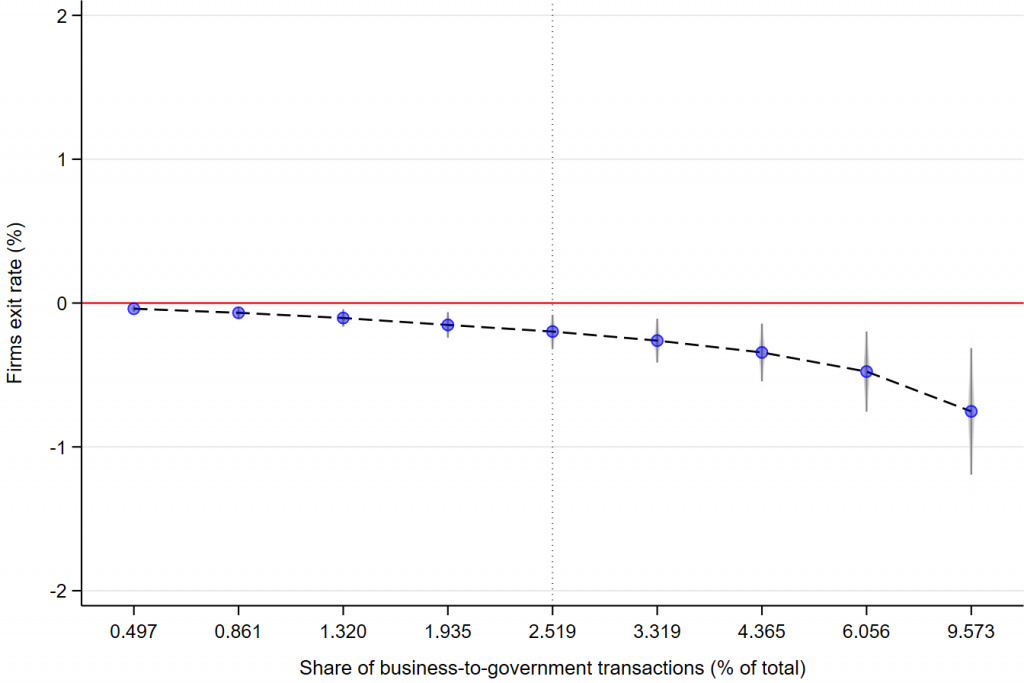 This is a non-negligible effect, considering that the sample average exit rate is equal to 8%. We document a much larger differential impact in countries characterised by longer government payment delays before the transposition of the directive, and in country-sector units that show a larger fraction of small firms. Furthermore, we find that in post-adoption years employment levels grow by 0.7 percentage points in sectors whose dependence on the government lies at the third quartile as compared to sectors whose share of sales is equal to the first quartile. Additional results show that investment rate increases by 0.17 percentage points, albeit this result is marginally statistically insignificant.

Overdue payment creates a number of negative externalities on firms, such as disruption of market activity, postponement of payment of employees and suppliers. This can have the effect of draining firms’ liquidity and, in the presence of limited access to credit, it can ultimately force firms to exit the market, with possible additional negative effects on both their suppliers and customers. Timely payments help firms having a healthy and balanced cash flow which is vital for regular business operations and for the creation of value. Making prompt payments the norm should be at the top of the agenda of policymakers to promote the development of a fairer economy.

At the time of writing, Europe is facing the challenge of the Covid-19 pandemic. Lockdown measures have put the economy under severe pressure and slowed down all economic activities. European governments have moved to counter the economic freeze by approving liquidity-enhancing policies, such as tax deferrals, government grants and guaranteed loans. Making government payments faster can be an additional effective action to increase firms’ cash flow and liquidity, allowing the economy to recover more quickly than it would have otherwise.