When things go wrong, governments frequently attempt to deflect the blame by shifting it onto other actors, such as previous administrations. However, as Tim Heinkelmann-Wild, Lisa Kriegmair and Berthold Rittberger write, European integration has provided governments with additional opportunities for blame avoidance, such as criticising the EU’s institutions or other EU member states. Drawing on a new study, they explain how the integration process has affected national blame games.

Blame games between government and opposition are a characteristic feature of politics in democracies. While opposition parties seek every opportunity to blame the government for allegedly bad policy decisions, governing parties try to either shun blame or direct it to other actors, such as the previous government.

First, when the authority to implement rests with national authorities, the Europeanisation of national blame games follows a blame-shifting logic. Their implementing authority renders national executives highly visible in the public. They are therefore a plausible target for blame attributions. Opposition parties seize this opportunity and blame ‘their’ government for contested policies. National governments, in turn, seek to deflect blame. The institutional complexities of the EU provide them with opportunities for blame shifting. As they share policymaking authority with other member states, governments seek to diffuse responsibility by pointing to the complicity of other governments. In this scenario, blame assigned to Brussels and other capitals is a corollary of the classic opposition-government dynamics.

The blame attributions of members of parliament (MPs) in the Austrian Nationalrat and the German Bundestag for the EU asylum system illustrate this blame shifting logic. The asylum system regulates which member state is responsible for administering asylum claims by people entering the Union. In addition, it defines minimum standards for reception conditions and procedures. Member state governments are responsible for implementing the policy.

Figure 1 highlights that opposition parties in Austria and Germany were very active in blaming ‘their’ national governments (67% of all blame statements). For instance, opposition politicians criticised the government for overburdening first-arrival states at the EU’s external border and their maltreatment of asylum seekers. Confronted with considerable blame pressure, government MPs sought to divert blame by shifting it onto EU-level policymakers (60% of all blame statements). For example, MPs from governing parties in Austria and Germany criticised the EU for its allegedly too liberal asylum system and first-arrival states for waving through migrants without registration. 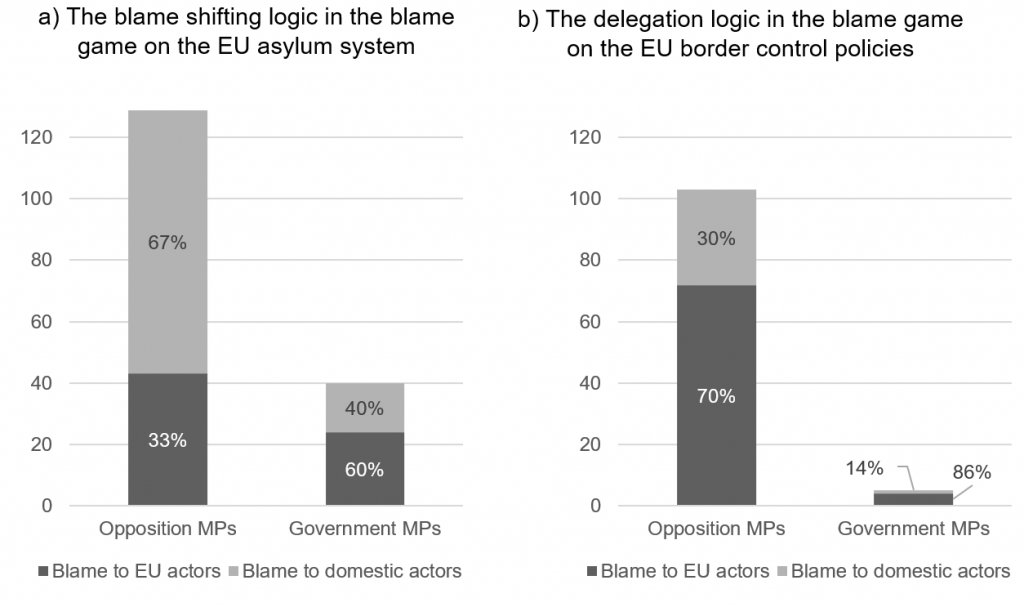 Note: For more information, see the authors’ accompanying paper in Politics and Governance

Second, when the authority to implement rests with EU-level actors, the Europeanisation of national blame games follows a delegation logic. In the absence of domestic implementing authority, national executives are less visible in the public. With EU-level implementers now in the spotlight, national governments are less plausible targets for the oppositions’ blame attributions. Consequently, opposition parties’ blame will thus chiefly target EU-level actors rather than the government. National governments, in turn, prefer to duck and cover behind the complexities of EU policymaking rather than joining the opposition in doubling down on blaming Brussels. After all, someone could start asking who is responsible for EU-level decisions in the first place?

Austrian and German MPs’ blame attributions in the context of the EU’s border control policy is a case in point. The protection of the EU’s external borders places Frontex in a focal position. This kept the opposition from blaming ‘their’ government for contributing to the death of migrants either by not doing enough – as a result of their restricted mandate and limited resources – or by doing too much – by attracting migrants to take the dangerous route across the Mediterranean. Consequently, 70% of all opposition blame statements are directed at EU-level actors. And in the absence of blame pressure, the Austrian and German governments chose to duck and cover.

Different institutional settings of EU policymaking thus give rise to two logics of ‘Europeanised’ blame games. When policy implementation lies with member states, blaming ‘Brussels’ is the result of governments’ efforts to evade opposition blame by shifting it to external EU actors. When EU-level actors carry out implementing tasks, the EU’s visibility attracts blame from the opposition, allowing governments to duck and cover. The delegation of implementing authority to the EU-level obviously offers national governments a convenient opportunity to avoid being held accountable by the opposition. The irony is that by choosing to hide and cover, governments are silently complicit in the gradual de-legitimation of the EU.

For more information, see the authors’ accompanying paper in Politics and Governance

Tim Heinkelmann-Wild – Ludwig-Maximilians-University Munich
Tim Heinkelmann-Wild is a Researcher and PhD Candidate at LMU Munich. His research interests include the causes and consequences of the contestation of multilateral institutions at both the international and domestic level. He is part of the research project “Public Responsibility Attribution in the European Union” which is funded by the German Research Foundation (DFG).

Lisa Kriegmair – Ludwig-Maximilians-University Munich
Lisa Kriegmair is a Researcher and PhD Candidate at LMU Munich. Her research interests include credit conditionality in the financial and Euro crisis and responsibility attributions. She is part of the research project “Public Responsibility Attribution in the European Union” which is funded by the German Research Foundation (DFG).

Berthold Rittberger – Ludwig-Maximilians-University Munich
Berthold Rittberger is Professor of International Relations in the Department of Political Science at Ludwig-Maximilians-University Munich. He has published on political integration in the EU, democratic representation beyond the state, and regulatory governance. He is Co-Editor in Chief of the Journal of European Public Policy and Co-Leader of the research project “Public Responsibility Attribution in the European Union” which is funded by the German Research Foundation (DFG). 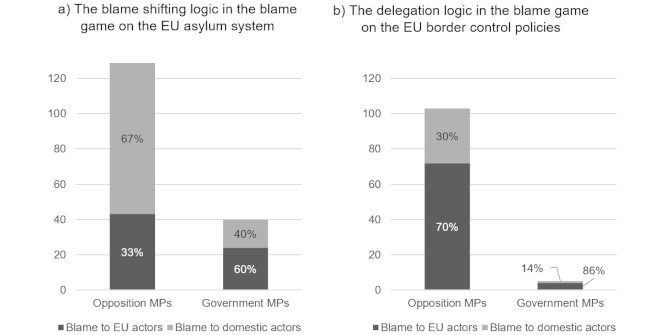