An article in The Economist recently suggested that the UK’s ‘productivity problem’ may be a product of the Office for National Statistics failing to estimate prices in the telecommunications industry accurately. Bob Hancké writes that this is unlikely to explain why UK productivity appears to lag behind countries like France and Germany. If the UK has failed to measure productivity correctly in the telecommunications sector, it is probable that everyone has made a similar mistake given all national statistics offices rely on the same basic methodology.

Most people are, however vaguely, aware of the UK’s ‘productivity problem’. For the uninitiated, it takes roughly the following form: if we put productivity, usually measured as output or value added per hour in the US at 100, Germany ends up somewhere around 125, France around 130 and the UK around 75 (we use per hour and not per worker per year to adjust for the differences in annual working time between the United States and the rest of the OECD).

Britain, in other words, is almost half as productive as its main trading partners. The explanation usually looks something like this: the top performers in the UK are roughly as good as the good ones in France and Germany; the problem is in the long tail of low-productivity firms, which use outdated, possibly counterproductive, management techniques and rely on an under-skilled workforce.

But, The Economist reports, with the amusing title that leads this section here, the official statistics at the basis of these comparisons have been particularly bad at measuring the productivity impact of information and communications technology (ICT). Between the mid-1990s and today, mobile telephones went from bulky machines for SMS and phone calls (and the game of Snake) to versatile tools with computing power that outstripped that of the one used to put people on the moon in 1969.

As a result of this massive increase in product quality and service provision (4G and 5G), telecoms prices fell not by the already quite significant 50% over that period that the ONS previously estimated, but actually by about 95%! Because of the prevalence of ICT in today’s business activities, such an adjustment is likely to translate into a non-negligible economy-wide productivity increase, the subject of a forthcoming report in October of this year.

Smoke signals on the continent

Ignore for a moment the problem that mobile phones do, actually, distract from work when used (unless you work for mobile telephone companies, are a sales rep or need them for any other reason for your job) and thus might be as much of a problem as a solution. The real issue with this story is that it helps you to explain exactly nothing of the UK’s lagging comparative position, unless you think that most continental Europeans are still relying on smoke signals as their main means of communication.

If the UK has mis-measured productivity in the ICT sector and, therefore, the contribution of that sector to overall productivity, it is very likely that everyone has made a similar mistake: all national statistics offices relied on the same basic methodology. The UK may be the only one to review that methodology, and thus chalk up a rise in productivity. But transferring the adjustment that follows from that methodological shift to Italy, France and Germany almost certainly would simply yield a pro-rated adjustment there as well.

In other words, nothing changes in the relative position of the countries. In fact, given that most continental economies were far more regulated than the UK in 1995, the effect of that adjustment may be larger than in the UK, thus actually increasing that gap. The fundamental problem at the basis of low productivity in the UK, sadly, is still the same: credit-driven growth and low skills. Plus ça change.

Note: This article gives the views of the author, not the position of EUROPP – European Politics and Policy or the London School of Economics. Featured image credit: Shaker Media (CC BY-NC-ND 2.0)

Bob Hancké – LSE
Bob Hancké is an Associate Professor of Political Economy at the London School of Economics and Political Science. 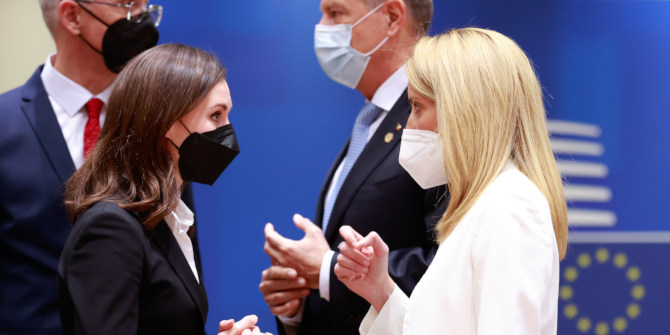