Does European institution building in key areas of national sovereignty go hand in hand with the emergence of a common identity among European citizens? Drawing on a new study, Fedra Negri, Francesco Nicoli and Theresa Kuhn show that the introduction of the euro has fostered a European identity, leading to a small but significant decrease in the share of people who identify only with their nation and not with the EU.

Over the past few decades, the European Union has acquired important powers in policy areas that are intrinsically linked to national sovereignty. Indeed, the supranational Court of Justice of the European Union (1952), the EU Customs Union (1968) and the Schengen Area (1985) can be seen as the first building blocks of a set of European core state powers. More recently, the euro (launched in 1999; currency changeover in 2002) has pushed European integration even further.

From its onset, the euro was intended to be more than a mere instrument for economic exchange. It aimed to provide a symbol of collective identity that could be tangibly experienced, not only by national and European political elites, but also by a wider audience of European citizens as they engage in cross-border exchanges, purchases, and interactions. As Thomas Risse put it in 2003, ‘[w]e miss the significance of the advent of the Euro for European political, economic, and social order if we ignore its identity dimension’ (p. 487). A common currency is one of the most visible ‘identity markers’ that shapes the EU as a taken-for-granted social fact and helps in building an imagined community.

Almost two decades after the currency changeover, can we say that the euro has helped make the European society real in people’s minds? To start with, have a look at the figure below that displays the share of Eurobarometer respondents who identify only with their nation and not with the EU by country group over time.

Figure 1: Share of Eurobarometer respondents who identify only with their nation and not with the EU 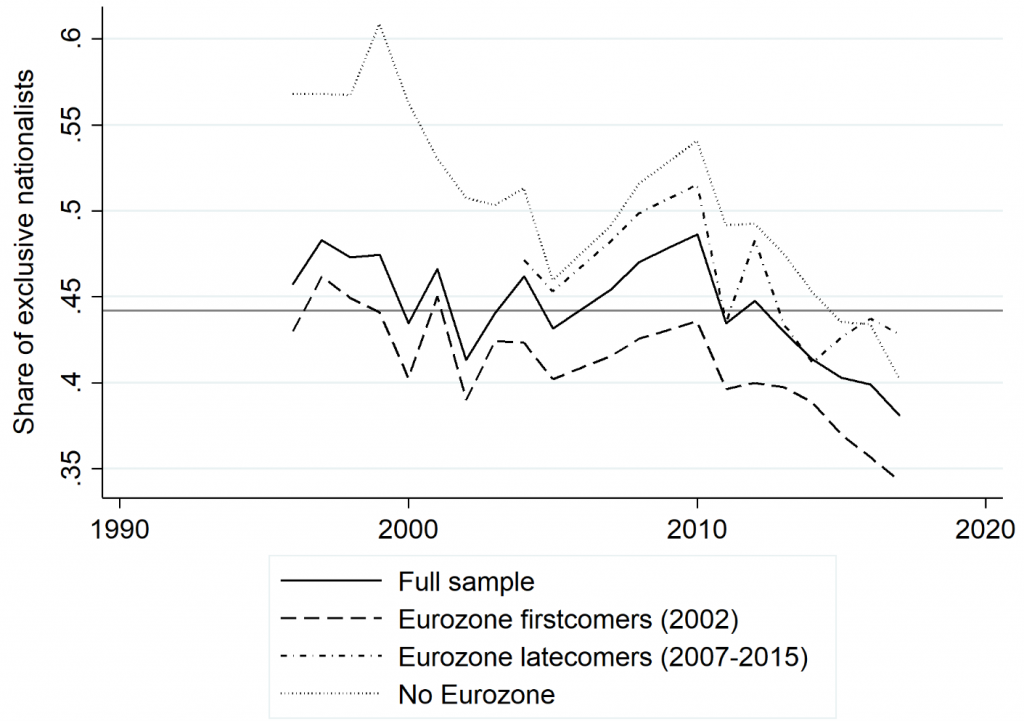 Overall, their share ranges between 13% (Luxembourg in 2016 and 2017) and 72% (UK in 2010). Compared to the full sample average (44%, horizontal grey solid line) and to the countries that introduced the euro in 2002 (41%, dashed line), the share of respondents who identify only with their nation is systematically higher in the member states that entered the EU in 2004 and 2007 and adopted the euro between 2007 and 2015 (46%, dash-dotted line) and in those that did not adopt the single currency (49%, dotted line). It is worth noting that the share of respondents who exclusively identify with their nation increased in all countries between 2005 and 2010, years characterised by both the rejection of the Treaty Establishing a Constitution for Europe in France (May 2005) and the Netherlands (June 2005) and the euro-crisis. However, from 2010 to 2014 – the years of the debt crisis – the share of respondents who identified exclusively with their nation decreased.

Given these trends, we formulate two hypotheses. Our baseline hypothesis maintains that the introduction of the euro is associated with a lower share of people who report an exclusive national identity. Second, we expect that, if the integration of a core competence of sovereignty, such as monetary policy, influences collective identities, then this does not simply happen from one day to the next, but is constructed over time. Thus, our second hypothesis maintains that the negative effect of the euro’s introduction on exclusive national identity increases over time.

The empirical analysis combines Eurobarometer survey data with macro-economic indicators from Eurostat. Our units of analysis are 26 EU member states, observed in the post-Maastricht period from 1996 to 2017 (the UK is included as it was a member state in the sample period; Cyprus and Croatia are excluded due to missing data).

Supporting our baseline hypothesis, our results show that, immediately after its introduction, the euro became a symbol affecting Europeans’ feelings of belonging towards Europe: in detail, the adoption of the euro is associated with a modest in magnitude, but statistically significant and robust across model specifications, reduction (-3%) of the share of people with exclusive national identity. This evidence builds a bridge to the first study on the relationship between the introduction of the Euro and European identity, published by Thomas Risse shortly after the euro changeover, in 2003. He demonstrated that the single currency, being ‘a visible link from Brussels to the daily lives of the citizens’ (p. 501), affected respondents’ identification with Europe already in the short run.

It could be questioned whether an effect of -3% is large enough to claim that the euro has had a positive effect on European identity. A look at descriptive statistics provides a partial answer: the standard deviation of the share of respondents reporting an exclusive national identity within the countries in our sample is equal to 5.7%. Moreover, across countries and years, its mean value is 44%. Considering these descriptive statistics, a change of 3% triggered by the adoption of the euro is not as negligible as it may seem. Moreover, it is worth noting that the euro is not the only supranational institution affecting European citizens’ ordinary lives. Thus, there are reasons to believe that, together, European institutions are capable of building and fostering collective identities.

Instead, contrary to our expectations, our results do not support our second hypothesis: the currency changeover exhausts its effects on European identity in the short run. The euro triggers a momentum-like, short-run, negative effect on the share of people with exclusive national identity, but such a negative effect does not increase over time.

All in all, our study suggests that common identities may stem from the construction of state powers, insofar as these contribute to creating the conditions that allow meaningful social interactions. While the lack of common identity is often used as a rhetorical artefact to constrain the construction of supranational institutions, our study suggests that integration processes could benefit from effective institutional designs as the latter may be essential factors in the emergence and fostering of a common identity.

Note: This article gives the views of the authors, not the position of EUROPP – European Politics and Policy or the London School of Economics. Featured image credit: Paolo Margari (CC BY-NC-ND 2.0)

Fedra Negri is an Assistant Professor in Political Science at the Università degli Studi di Milano.

Francesco Nicoli is an Assistant Professor in Economics and International Governance at Ghent University.

Theresa Kuhn is an Associate Professor in Political Science at the University of Amsterdam. 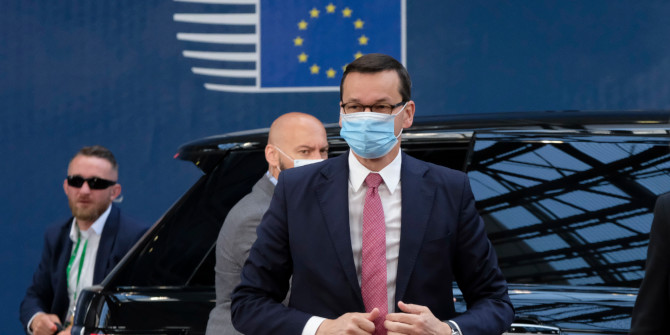 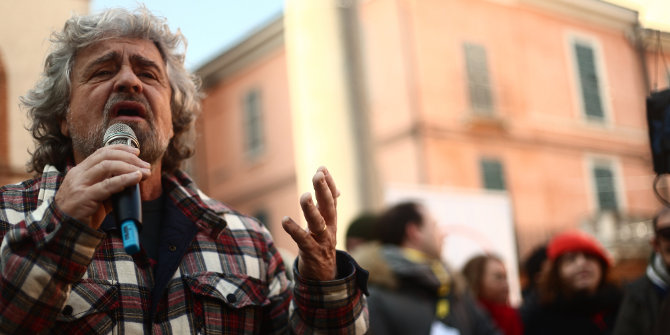