Public consultations are often held when EU institutions draft new regulations. Yet as Rik Joosen explains, the involvement of interest groups at earlier stages of the process may limit the influence of these public consultations on the rules that are agreed.

EU institutions are increasingly developing ways to engage with societal interests during their policymaking. One way interested actors can provide input is through public consultations. In a recent study based on two novel datasets, I found that participating in consultations on regulation may, however, be too little too late. Many consultation texts are drafted with the help of a select number of interest groups, even before consultations allow for broader interests to have any impact. This initial influence makes consultations less open than they appear to be.

I focused on 11 years of regulatory rulemaking by the EU’s aviation regulator, the European Union Aviation Safety Agency (EASA). EU regulators use regulatory rules to specify how legislation should be interpreted and what complying practically looks like. They are key to the transparency and consistency of EU regulatory enforcement. When drafting these rules, EASA often invites interest group representatives, mostly from the aviation industry, and national regulatory agencies to provide input.

After the rule is drafted, EASA launches a public consultation in which anyone can suggest changes to the rule. EASA thereafter evaluates these suggestions when finalising the rule. But if an interest group gets its way during the early rule drafting stages, it is already one step ahead in determining what the final rule will look like. Studies on US federal agencies suggest that such early influence impacts a rule to the extent that public consultation input may not allow for many far-reaching changes.

Observing the shadow of influence

Imagine an interest group walking into the rule drafting group meeting at the EASA offices in Cologne with a list of preferences for a regulatory rule. After a few subsequent meetings, all of their preferences are adopted in the draft rule. Some weeks later, the public consultation starts. The group may express their agreement with the draft in a short comment, but they may also refrain from commenting as they trust that their preferences are sufficiently solidified in the draft.

This would be completely different for an interest group that walked out of the rule drafting group meeting empty-handed. They would most likely immediately start drafting their comments for when the public consultation is launched. Especially if they think that that would still make a difference. By looking at how interest groups that helped draft a rule behaved during public consultations, I was, therefore, able to infer what their role had been in shaping the draft.

To that aim, I employed two novel datasets. The first contains 538 observations of interest groups being a member of 65 rule drafting groups that EASA used between 2007 and 2017. The second reports on 42,595 consultation comments submitted on the rules they drafted, over the same period, with accompanying responses from EASA.

The responses from EASA contain standardised replies (to anyone in charge of consultation comment processing at EASA: this is much appreciated by quantitative researchers interested in consultations). ‘Accepted’, ‘partially accepted’, and ‘not accepted’ are used by EASA as a response to a suggested change to the rule. It uses ‘noted’ when no change to the rule is required. The latter is not only a response to endorsements of the rule, but also to interest groups asking for clarification or suggesting changes that fall outside of the rule’s scope. I used these standardised responses to determine which of the 42,595 comments are suggested changes to the rule and which are not.

My analysis makes two key observations. First, 55 per cent of interest groups that draft regulatory rules do not comment on public consultations afterwards. This implies that many such interest groups are quite satisfied with the draft and do not see the need to defend it in public consultations. This is particularly interesting as commenting on a consultation is easy for them. Those involved in drafting a rule are well prepared and participating only requires them to submit their input through EASA’s online consultation tool. Yet, they largely refrain from doing so.

Second, many of the rule drafters that do respond in public consultations suggest changes to the rule they helped draft. Those involved in rule drafting are predicted to suggest a change to the draft in 70 per cent of their comments. This is only 59 per cent for those that did not draft the rule. The figure below shows that these probabilities are, however, indistinguishable as uncertainty around the predictions overlap. Nonetheless, when interest groups that drafted a regulation comment on consultations, they clearly have issues left to settle. It is therefore likely that these actors were not very influential when drafting the rule.

Figure 1: Predicted probability of attempting to change the draft rule for groups with and without access to rule drafting 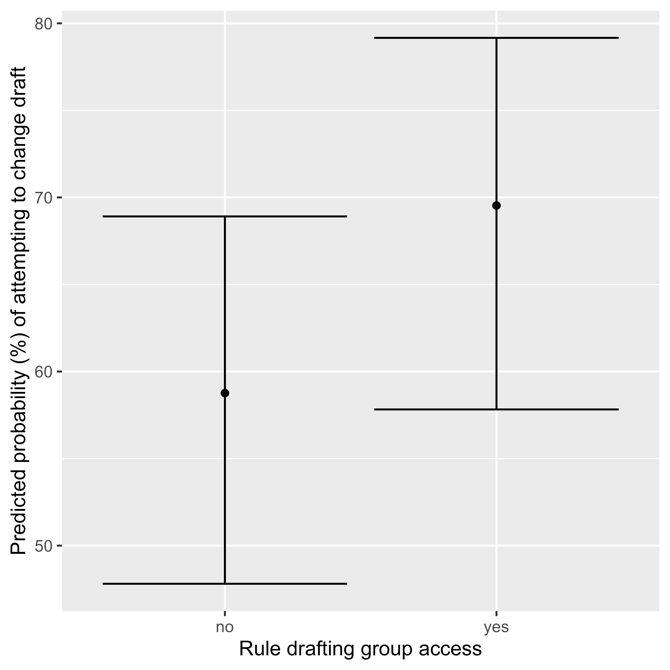 Note: Figure is based on a multilevel logit model. The horizontal bars indicate 95 per cent confidence intervals.

Combined, these results reflect an image of EASA rulemaking where a key group of actors determines what the draft looks like at the expense of a second group that tries again in consultations.

What these results tell us about consultations

On the other hand, the fact that many groups that draft regulation refrain from participating in consultations tells us the opposite. Consultations only allow for limited input into regulatory rules. Much of the rule is likely already decided by groups that limit themselves to rule drafting. There are examples in responses to consultation comments where EASA refuses to change the rule, explaining that actors that drafted the rule already agreed on a way forward.

Relying on the input of interest groups during rule drafting is, however, not a bad thing in itself. Many interest groups, in particular industry representatives, know a lot about their field, as well as the practical feasibility of the agency’s plans, and it is essential to get them on board early to pre-empt enforcement problems. It is, however, important that rule drafting does not lead to rules which merely benefit specific businesses. Broad societal input, therefore, remains an important priority for EASA to pursue.

Note: This article gives the views of the author, not the position of EUROPP – European Politics and Policy or the London School of Economics. Featured image credit: Simone (CC BY-NC-SA 2.0)

Rik Joosen is a PhD Candidate at the Department of Public Administration and Sociology at Erasmus University Rotterdam. 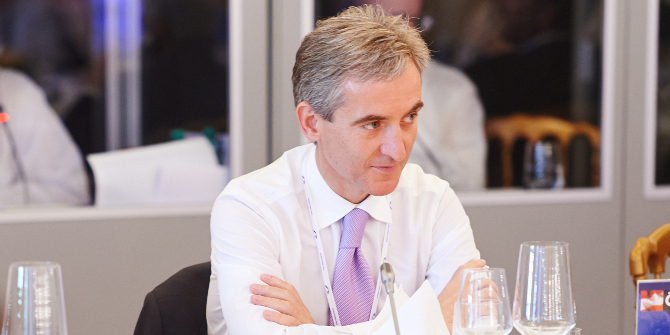 Who won Poland’s ‘referendum war’ and how will it affect the October election?