Low German wages are often cited as a key contributing factor to imbalances in the Eurozone. Donato Di Carlo and Martin Höpner demonstrate that while nominal unit labour cost growth in Germany consistently undershot that of other Eurozone countries in the first decade of the euro, the country has undergone a ‘silent rebalancing’ following the financial crisis. Unfortunately, this incomplete process is likely to be reversed by the shock from Covid-19.

The history of the euro has been punctuated by external shocks. Just as the financial crisis signalled the end of the first decade of the single currency, the outbreak of Covid-19 has now ended the second phase of Europe’s Economic and Monetary Union (EMU). Given the major implications the pandemic is likely to have, it is worth taking stock of where EMU stands and the future development of its member states.

Prior to the financial crisis, EMU was marked by internal real exchange rate distortions, brought about by excessive wage growth in the South and restraint in the North, particularly in Germany. In a monetary union with a one-size-fits-all monetary policy and no exchange rate adjustments, this is precisely what should be avoided. But how much of this divergence during the first phase has been reversed since the financial crisis? And have wages in Germany grown sufficiently to provide a correction to the previous decade’s undervaluation?

Figure 1 below shows cumulated nominal unit labour cost (NULC) increases for the period 1999-2019 (1998=100) in comparison to the ECB’s inflation target. We display developments in Germany, France, the Eurozone and Southern Europe (Greece, Italy, Portugal and Spain – labelled as GIPS in the chart). On average, NULC increases were close to the inflation target for the euro area. But the average hides large differences. Germany can be assigned blame for undershooting, which reached a peak in 2007, while Southern Europe can equally be assigned blame for overshooting. 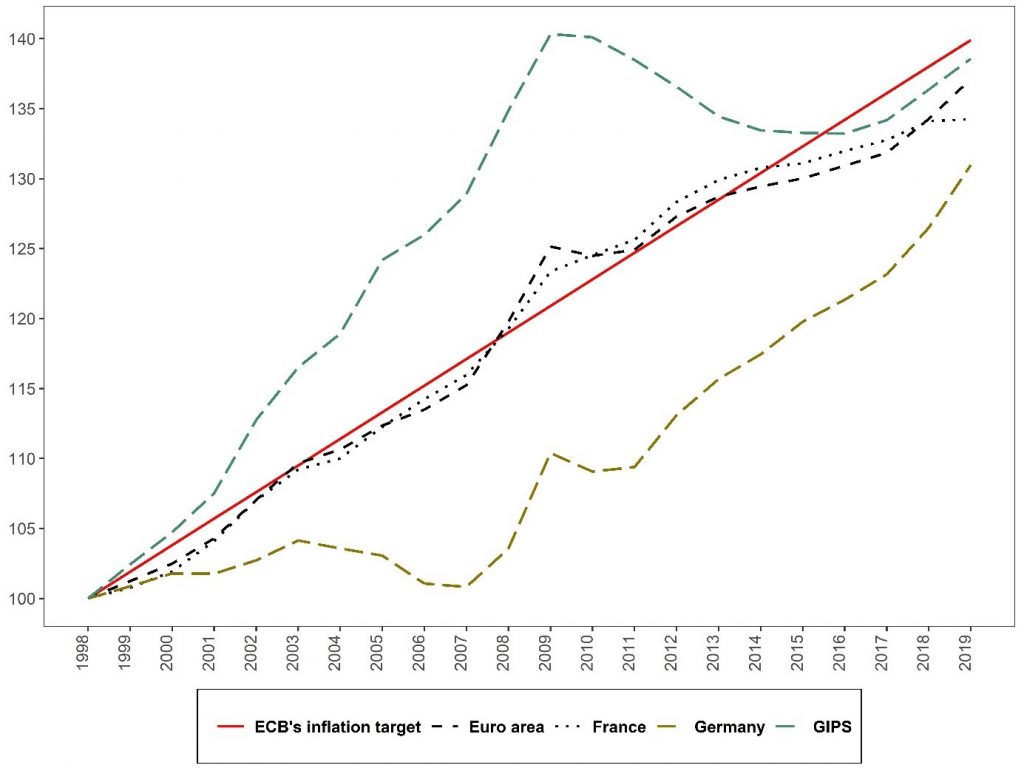 In 2009, the discrepancy between Germany and Southern Europe had reached 30 percentage points, pointing at substantial intra-EMU real exchange rate distortions. Remarkably, France features stable NULC growth in line with the ECB’s inflation target throughout the whole period. This is not a coincidence. Although French unions are organisationally weak, the French state has maintained more wage steering capacity than most others. Public sector wages are set centrally under the shadow of state unilateralism. In the private sector, contrary to Germany, statutory extensions of collective agreements’ coverage are encompassing.

Since 2011, however, there has been a partial re-convergence in the EMU characterised by (painful) internal devaluation in the South and gradual wage reflation in Germany which has accelerated since 2017. Southern European countries have restored the competitiveness of their (relatively small) export sectors while harming their (relatively large) sheltered sectors. For lack of import demand from EMU peers, Germany diverted its exports to extra-EMU consumers of capital goods.

But Germany’s ‘silent’ rebalancing before Covid-19 is worth emphasising. To be sure, Germany’s wage growth was not out of this world. But the post-crisis partial re-convergence was nevertheless double-sided and brought about not only by restraint in the South, but also expansion in Germany. Germany’s NULC increases were large enough to correct much of its previous undervaluation, relative to the Eurozone average. But within Germany there has been a two-tier sectoral dualisation between the industrial and service sectors and within the service sector.

The second figure displays cumulated NULC changes for the 1998-2018 period (1998=100; data for 2019 are not available yet) for five sectors: industry, construction, low-end services, financial and insurance activities, and the public sector. The findings are remarkable. During EMU’s first phase, restraint in Germany was not driven primarily by the manufacturing sector, but by services and construction.

Marked wage restraint featured in low-end private services, the public sector and construction. High-end services like financial and insurance activities, in contrast, enjoyed sustained wage growth. Increasing dualisation indicates that Germany is not a case of inter-sectoral pattern bargaining, a term used by political economy and industrial relations scholars to describe wage regimes in which the exposed sectors set a competitiveness-safeguarding target which they afterwards transmit to the sheltered sectors. Were that to be the case, we would not observe such inter-sectoral divergence. 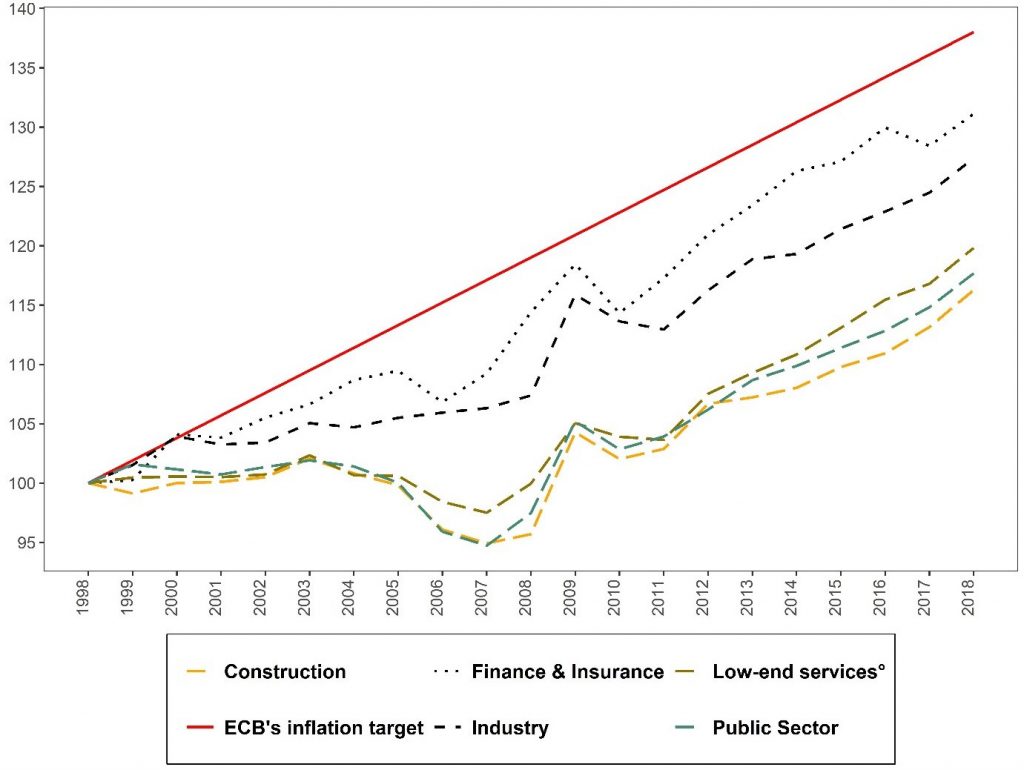 Considering that wage-setting is beyond the central government’s reach in Germany (even in the public sector), it is hard to attribute these outcomes to a conscious mercantilist grand plan. Instead, wage developments in these sectors must be understood in light of the respective sector-specific dynamics.

Wage moderation in low-end services (e.g. hospitality and retail) comes as no surprise. This reflects the erosion of unionisation and collective agreements, high unemployment, and labour market liberalisation. It is the extreme restraint in the public sector which is surprising. Public sector employees are highly skilled and relatively well unionised. The public sector’s collective bargaining coverage is the highest across sectors. Yet, public sector wage growth fell even behind the low-end services.

These puzzling public sector developments can be explained only by taking the fiscal policy context into account. Chancellor Schröder’s tax reform in 2000 dealt a blow to the public finances of the Länder. In the quest for fiscal consolidation, the finance ministers of the Länder exited the centralised framework for public sector wage bargaining and fiercely imposed wage restraint and cutbacks throughout the mid-2000s. Germany was unique with regard to its public sector wage developments in the first euro decade. No other euro member came even close.

Wage dynamics in construction resembled those of the public and low-end services sectors. The German construction sector had been shrinking since the Bundesbank’s hard monetary policy stance after the reunification boom. Before the financial crisis, a one-size-fits-none monetary policy resulted in a relatively high real interest rate in low-inflation Germany – which slowed down real estate activity. Based on data from the OECD and the Federal Statistical Office of Germany, the percentage of workers who were employed in construction shifted from 9% in the 1990s to 6% in the mid-2000s, while the number of finished dwellings halved. Beyond the widespread fear of losing jobs, wage policies in the construction sector were shaken up by the European free movement of workers, non-enforcement of the posted workers directive, and illicit work. In no other euro member state did construction wage restraint go as far as in Germany until the financial crisis.

Germany’s great disinflationary push was, in sum, driven by the sheltered sector. Industrial wages were undershooting too, but this was less pronounced than in the case of services, with the exception of financial services. In German industry, trade unions remained and are still powerful. The logic of the industrial wage regime, however, changed due to decentralisation, a process that started in the 1990s and accelerated in the 2000s.

Many firms from then on directly negotiated with trade unions. Where firms remained covered by central collective agreements, opening clauses paved the way to the expansion of firm-level agreements. Firm-level competitive corporatism is only one part of the explanation for the cost competitiveness of the German industrial sector, however. The other part is that the industrial sector consumes construction and other services, delivered by sectors in which wage moderation went much further than in industry.

In the euro’s second decade, the trajectory of wage growth has changed course and nominal unit labour costs have risen in line with industrial sector dynamics. This rise occurred in the context of an increasingly tight labour market. From above 11% in the mid-2000s, unemployment went down to around 3% (according to the OECD’s adjusted unemployment figures; the national figures are higher). Labour scarcity is a positive contextual factor for wage increases. Wage growth in construction has benefitted from the sector’s steady expansion and rising house prices. The introduction of a minimum wage in 2015 and the reregulation of temporary agency work has strengthened the positions of workers in low-end services.

Germany’s gradual rebalancing was significant, but incomplete. Although the economic and fiscal conditions for rising wages became increasingly better during the second half of the 2010s, Germany has not fully corrected the undervaluation which began following the introduction of the euro. Perhaps, without the pandemic, it would only have taken a few more years for full correction. But the Covid-19 crisis has put an end to such hopes. In the past, Germany reacted to crises by enforcing competitive undervaluation in the private sector and fiscal cutbacks in public sector wage setting. We have no indication that this time will be different.

The bottom line is that we should not be anticipating further wage expansion in Germany. It will not occur in the low-end services sector where Germany has turned into a ‘liberal market economy’. Nor will it come about in the exposed industrial sector, in which powerful works councils are prepared to trade wage increases against job security. As for the public sector, the government has already expressed its intention to return to fiscal consolidation as of 2022. This is an important message for Germany’s neighbours and trading partners. Due to the need to confront the immediate health hazard, some generous wage increases and one-off payments will occur in the public sector and perhaps also in construction, depending on further developments in the real estate market. But we doubt that this will be enough to break the foreseeable overall dynamic of wage moderation.

Note: This article gives the views of the authors, not the position of EUROPP – European Politics and Policy or the London School of Economics. Featured image credit: Alex Osaki (CC BY-NC-SA 2.0)

Donato Di Carlo is a Max Weber Fellow at the European University Institute in Florence, Italy.

Martin Höpner is a Research Group Leader at the Max Planck Institute for the Study of Societies in Cologne, Germany.

Is the EU planning an army – and can the UK veto it?

Happy holidays from EUROPP to all our readers and best wishes for 2014!