When government ministers meet in the Council of the European Union, what determines the level of attention they direct toward particular policy areas and issues? Based on recent research, Frank Häge illustrates how the Council has focused on different policy areas over time. He writes that one of the most striking trends to emerge from the data is the reactive nature of the Council with respect to managing the financial and migration crises, with both issues receiving relatively little attention until after each crisis began.

The Council of the European Union has long been a relatively secretive organisation. In the past, accounts of what the Council does and how it operates have largely been based on anecdotal evidence or potentially unrepresentative insider reports. Partly as a result of the adoption of new transparency policies, we can now gain greater insights about the Council’s internal decision-making processes, not only for particular cases, but at a much larger scale. In a recently completed research project, I have collected information on the date and duration of more than 70,000 meetings of the Council’s working parties, covering all areas of the Council’s policy activities between 1995 and 2014.

Working parties consist of officials from member state governments. Most of the Council’s negotiations and policy-formulation work takes place in these bodies. Officially, working parties only prepare the ministers’ work, but in practice, most substantive discussions and the majority of policy decisions are made at this level in the Council’s hierarchical organisational structure. Thus, the duration of working party meetings in different policy areas and sub-areas is a good indicator for the allocation of the Council’s political attention. Political attention is a limited resource, and the way it is allocated across policy areas and over time is a good indicator of the ability of a political institution to address societal problems in an unbiased and timely manner.

The breadth and depth of the data allow us unprecedented insights into what issues occupied the Council’s agenda, not only over time, but also across and within policy areas. At the broadest level of aggregation of entire policy areas, Figure 1 shows that throughout the study period, usually more than 30% of all working party meetings were devoted to Foreign Affairs. Together with the second and third largest policy areas, Justice and Home Affairs and General Affairs, it accounted for more than 50% of all meetings.

The more intergovernmental nature of policy-making in these areas, which is also associated with more administrative and implementation work by the Council, might account for the preponderance of meetings in these areas. Less surprisingly, the busiest areas of Community policy-making, Internal Market, Agriculture, and Environment, also received the fourth to sixth largest shares of attention. It is noteworthy that Economic and Finance, with the overall seventh largest share of attention, in more recent years surpassed the share of attention devoted to the environment. All in all, these seven (out of a total of 17) policy areas took up more than 75% of the Council’s political attention throughout the entire 20-year period.

Figure 1: Level of attention devoted by the Council of the European Union to different policy areas (1995-2014) 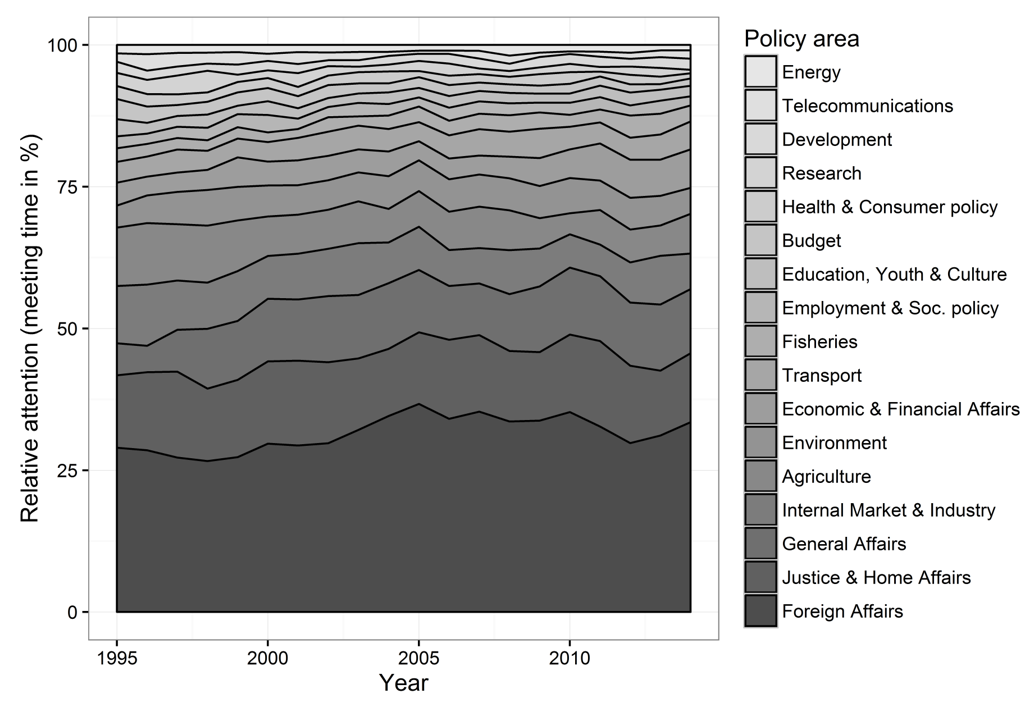 Apart from the increase in the share of attention devoted to Economic and Financial Affairs, starting with the onset of the financial and fiscal crisis in 2008, the diverging developments in Foreign Affairs and Agricultural Policy are of interest. The share of attention devoted to Foreign Affairs experienced the most substantial increase, from around 28% in the late 1990s to around 35% in the years after the Eastern Enlargement. However, subsequently, the share dropped again somewhat to around 32% in 2014.

The decrease is particularly pronounced after 2010, which might reflect efficiency gains as a result of the organisational changes introduced by the Lisbon Treaty and/or a lower workload because of the ‘outsourcing’ of certain tasks to the newly created External Action Service. In contrast to Foreign Affairs, the share of attention devoted to Agriculture dropped considerably from more than 10% in the second half of the 1990s to around 6% at the end of the study period. These developments are indicative of a general shift in the Council’s attention from less controversial, traditional Community policy areas to the more contentious areas of ‘high politics’.

To evaluate the responsiveness of the Council to particular societal problems, it is possible to ‘zoom into’ particular policy areas and look at the duration of meetings of working parties dealing with particular issues. Figures 2 and 3 document the changes over time (in half-year intervals) in the total amount of attention devoted to Financial Regulation and Fiscal Policy as well as Immigration Policy. Figure 2 shows that the amount of attention devoted to Economic and Financial Affairs increased generally in recent years, but the increase in the meetings of working parties concerned with Financial Regulation or Fiscal Stability (left panel) was particularly pronounced. Furthermore, the timing of the increase in the first half of 2009 follows closely the onset of the financial and fiscal crisis in the second half of 2008. 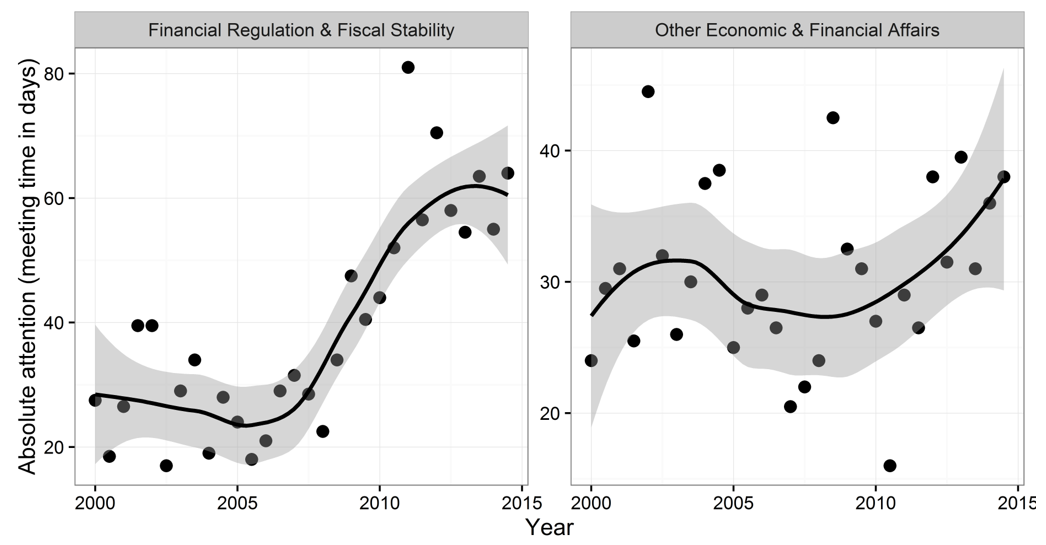 Figure 3: Attention paid to immigration policy and other Justice and Home Affairs issues in the Council of the European Union (2000–2014) 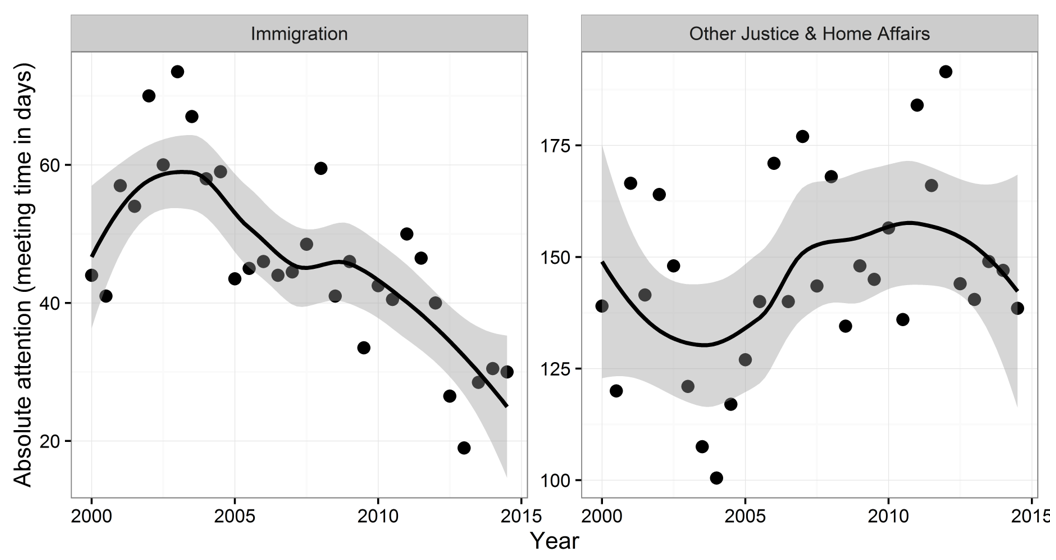 The two examples just discussed raise serious questions about the ability of the Council to foresee and therefore counteract or at least mediate serious international crises. The Council seemingly sleepwalked into the financial crisis of 2008 as well as the migration crisis of 2015. Rather than taking pre-emptive action, it only attempted to deal with the fall-out after the fact.

The financial crisis might have been hard to anticipate, given its relatively sudden onset and speed of intensification. However, the migration crisis was the culmination of a rather long, steady, and accelerating growth in the number of migrants arriving at Europe’s shores. Even though the additional steep rise in the number of migrants in the summer of 2015 might have come as a surprise, any informed observer knew before this point that existing EU policies were ill-equipped to accommodate the increasing number of arrivals in a satisfactory and sustainable manner.

Of course, looking at changes in the attention paid to a very selective set of issues over time does not allow us to infer why the Council was not able to anticipate and pre-empt these crises; or whether this inability was the result of unique actor and interest constellations in these particular areas rather than general features of the Council’s composition or decision-making process. However, the data provide an important basis for pursuing these types of questions further. The answers to these questions will have important implications for the legitimacy of the European Union as a political organisation and may suggest specific, practical solutions for improving the Council’s ability to not only react after the fact, but anticipate and mediate international crises.

Note: This article gives the views of the author, and not the position of EUROPP – European Politics and Policy, nor of the London School of Economics. Featured image credit: (c) European Union 2015 (CC-BY-SA-ND-NC-2.0)