In The Invention of Papal History: Onofrio Panvinio between Renaissance and Catholic Reform, Stefan Bauer provides a new addition to English-language offerings on papal historiography, presenting a clear and detailed introduction to Onofrio Panvinio, an Augustinian monk and one of the most important historians of the late Renaissance and early Catholic Reformation. This study of Panvinio’s complex contribution and intellectual legacy should be praised for its clarity, in-depth research and useful reflection on the complicated past, writes Jennifer Mara DeSilva. 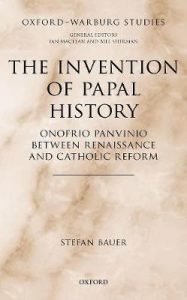 This volume is a useful addition to the relatively slim English-language offerings on papal historiography. Stefan Bauer of Royal Holloway, University of London, presents a clear and detailed introduction to Onofrio Panvinio, an Augustinian monk and one of the most important historians of the late Renaissance and early Catholic Reformation. During his short lifetime (1530-68), Panvinio composed a prodigious number of texts, reflecting the growing interest in Catholic Church history between Martin Luther’s death (1547) and the end of the Council of Trent (1545-63). His focus included genealogies of the Roman nobility, a treatise on the office of the papal vice-chancellor, another on papal primacy, the first examination of conclave procedures (the process for choosing the pope), biographies of Popes Sixtus IV through Pius V (1471-1572), a large-scale ecclesiastical history with sources and many other less well-known works. This breadth speaks to Panvinio’s access to archival materials, broad contemporary interest and the patronage opportunities that allowed him time to write.

At its core, The Invention of Papal History is a study of texts produced by a distinct combination of ideas and encouragement that was slipping away even as Panvinio toiled furiously. Perhaps the most unusual aspect of his life is the fact that he was an Augustinian monk, dispensed from living at a monastery, who composed works for noble clients as well as the printing press. Late in his career, he employed three scribes, an illustrator and a cook, and was in constant communication with current and potential patrons. The king of Spain, Phillip II, Ferdinand I and Maximillian II, both Holy Roman Emperors, and the wealthy banker and bibliophile Hans Jakob Fugger were all Panvinio’s patrons at various times. Paradoxically, the quest for Catholic patrons, financial resources to ransom his brother and support his mother and sister and permission to print were constant concerns in a period that envisioned learned seclusion as a monastic ideal.

Bauer begins his study with a detailed biography in Chapter One, exploring Panvinio’s origin in Verona, his admission to the Augustinian Hermits and his education in Naples and Rome. Panvinio benefitted from cultivation and mentoring by the Prior General of his order, Girolamo Seripando, and its cardinal-protector, Marcello Cervini, who became Pope Marcellus II. The latter man had been a tutor to the grandson of Pope Paul III before becoming a cardinal. Not only did Cervini introduce Panvinio to important Roman scholars, but he also facilitated his admission to the household of Cardinal Alessandro Farnese, Cervini’s former charge. Although he faced political disagreements with certain popes that required him to leave Rome for several years, Farnese would become one of the greatest patrons of sixteenth-century Rome. His name can still be seen on the façade of Il Gesù, the Roman Jesuit church, which he largely funded.

While patronage is one of the constant themes in this book, it is difficult to know the impact of Panvinio’s work, either on his patrons or on early modern readers. Bauer’s study focuses on his life and relationships as seen through his manuscripts, but mostly avoids theorising about their role in the larger intellectual landscape. Censorship of Panvinio’s work is one of Bauer’s central concerns, and in keeping with the close focus on the papal court and influence.

While Chapter One’s biographical narrative introduces many of Panvinio’s works, Chapter Two uses his final decade (1558-68) as a lens for understanding his legacy. At first this was a tumultuous time in Rome, with the war with Spain coming to a disastrous end and the pope banishing his own nephews, while Farnese and Panvinio lived in self-imposed exile. However, after Pope Paul IV’s death in 1559 both men returned to Rome and began a period of great production. Readers learn more about how Panvinio came to his projects, his (and posthumously his brother’s) efforts to bring works to press as well as what remained unfinished at his death. Although Paolo Panvinio’s biography of his brother is used throughout the study to support the narrative, a dedicated discussion of this text would have been beneficial.

Chapter Three explores the development of Panvinio’s interest in papal and imperial elections, which allows discussion of ecclesiastical and secular patronage, and offers a chance to consider his originality. Bauer compares Panvinio’s works with other texts, including some by Angelo Massarelli and Alfonso Chacón. This is quite an extensive and complex chapter that incorporates large-scale analysis of Panvinio’s texts with an effort to situate his identity as a scholar amid changing intellectual practice and ecclesiastical politics. His work on conclave procedure benefitted from four comparatively short pontificates from 1550-72. After his death a series of four conclaves in quick succession (1590-92) would prompt Pope Clement VIII to take an interest in his work with an eye to reforming papal practice.

Chapter Four shifts to considering Panvinio’s larger ecclesiastical history and papal biographies. These texts filled a need, rebuking the Protestant Magdeburg Centuries (1559-74) and continuing Platina’s Lives of the Popes (1471-75). However, as Panvinio’s works articulated visions of the Catholic Church in periods of tension and evaluated papal actions, inevitably they came under consideration by the Roman Inquisition. Panvinio’s even-handed treatment of the eleventh-century Investiture Controversy, which pitted Pope Gregory VII against Emperor Henry IV, endeared him to Protestant scholars but attracted suspicion from Catholic censors. Similarly, the papacy’s continuing endorsement of the Donation of Constantine (the emperor’s supposed transfer of the Western Roman Empire to the pope’s control in 315), which Panvinio criticised, became a test case for scholarly orthodoxy. Finally, the growing expectation that clerical authors would support the evolving work of confessionalisation, by describing a homogenous and virtuous past stretching forward from St. Peter, was at odds with the document-based style that Panvinio and other humanist scholars used. Modern readers might be surprised that historians supported their arguments by inserting extensive portions of earlier authors’ works (as some classical historians did), but censors saw it as endorsing dangerous narratives written in less stringent times.

Notably, during Panvinio’s lifetime, history writing was not as propagandistic as it would become from the 1580s onward. As Bauer reveals, Panvinio was an intermediate figure, whose lifestyle and scholarship – as a monk living in a cardinal-nephew’s household writing both noble and papal biographies and humanist histories – placed him between phases of intense Catholic-Protestant conflict and an increasingly severe confessionalisation campaign. Perhaps because his short life occurred in that transitional period, ultimately Panvinio’s work was overshadowed by his longer-lived contemporary Cesare Baronio. Moreover, as political need pressed the Catholic Church, papal biography and ecclesiastical history became tools used by the polemicist to protect the Catholic vision of immutable doctrine. Panvinio’s freer evaluation of clerical virtue and less dogmatic historiographical style seemed impious to some censors. After his death there were few printed editions of his work, and shortly Baronio’s Ecclesiastical Annals (1588-1607) became the official Catholic response to Protestant conceptions of Christian history and Catholic theological evolution. What began as a promising and productive career was unexpectedly ended and sidelined by more attuned authors.

Stefan Bauer’s study of Onofrio Panvinio’s complex contribution and intellectual legacy should be praised for its clarity, in-depth research and useful reflection on the complicated past.

Note: This article first appeared at our sister site, LSE Review of Books. It gives the views of the author, not the position of EUROPP – European Politics and Policy or the London School of Economics. Featured image credit: Randi Hausken (CC BY-SA 2.0)

Jennifer Mara DeSilva, PhD is an Associate Professor of History at Ball State University in Muncie, Indiana, USA. Her research explores issues of identity and ceremony in papal Rome and early modern Italy.