The Hungarian and Polish governments have frequently been accused of backsliding on democratic standards and the rule of law. Drawing on a new study, Adam Holesch and Anna Kyriazi argue that a much overlooked factor in this debate is the extent to which both governments have collaborated in their efforts to revise democratic institutions and norms.

Hungary and Poland have registered a sharp decline in democratic quality over the last decade. According to Freedom House, there has been a continuous fall in democratic indicators in Hungary since 2010, and in Poland since 2015. In 2020, Freedom House demoted Hungary to the status of a ‘transitional or hybrid regime’ and Poland to that of a ‘semi-consolidated democracy’. In both countries, a methodical dismantling of the institutions and norms sustaining democracy has been orchestrated by right-wing nationalist governments: Fidesz in Hungary, and Law and Justice (PiS) in Poland.

Figure 1: Freedom House democracy score in Hungary and Poland from 2010-2020 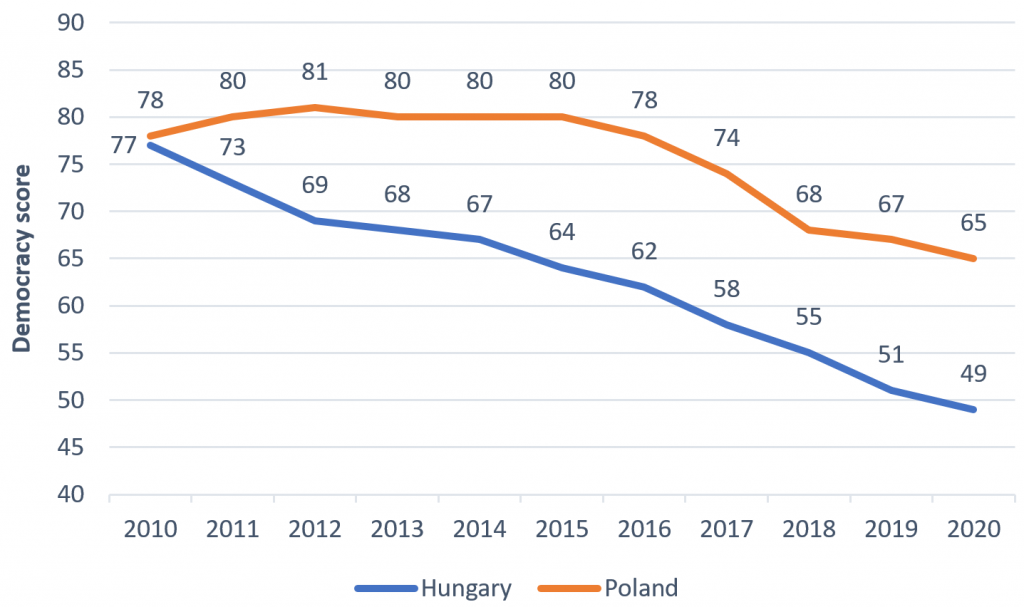 Note: Figure compiled by the authors using the Freedom House Nations in Transit reports. A lower score indicates a lower level of democracy.

In a recently published study, we argue that these two processes have not simply coincided in time, but have, in fact, intersected: Hungarian and Polish political leaders have systematically relied on each other to keep their backsliding projects going, even in the face of strong countervailing pressures. We argue that while it is domestic factors that put a state on a path toward backsliding, international cooperation can contribute to maintaining this trajectory.

The most consequential use of the Hungarian-Polish coalition was to reduce the EU’s sanctioning power. For this to succeed, the two partners took advantage of the design of the EU’s rule of law framework, above all the Article 7 procedure, which requires unanimity in the European Council as a precondition to take any meaningful sanctions. Even though the affected member state loses its voting rights under this procedure, the veto of only one other member state government can halt the process.

Consequently, whenever the Hungarian and Polish governments have faced the possibility of severe consequences for breaches of the rule of law, they have resorted to reassuring each other of a protective veto. For example, as soon as potential sanctions were threatened against Poland’s PiS-led government by the EU in 2015, Hungarian Prime Minister Viktor Orbán was quick to declare that ‘it was not worthwhile for the EU to think about imposing any sanctions on Poland, as this would require full agreement, and Hungary will never support sanctions against Poland.’

Indeed, PiS and Fidesz politicians have consistently shielded each other against EU actions every step of the way, both through discourse and actions (e.g., voting in the European Parliament). What is less well-remembered is that the liberal Civic Platform (PO) party of Donald Tusk supported the Fidesz government in the early 2010s, perhaps failing to grasp the full extent of Orbán’s backsliding ambitions. In 2012, then Prime Minister Tusk defended the Hungarian government against EU criticism, saying:

‘Hungary is not only our friend but a country in a similar situation as we are. It is in the interest of Warsaw that Brussels does not treat the “new countries” of the Community as younger, poor brothers. And does not discipline them like school kids, when – in its opinion – they are starting to depart from European values.’

Beyond mutual support at the EU level, the two coalition partners have relied on each other in different ways, adjusting their cooperation to their specific interests and opportunities. One form of this is learning. Above all, Law and Justice was eager to learn from Fidesz. As early as 2011, following the party’s loss in that year’s parliamentary election, PiS leader Jarosław Kaczyński famously claimed that he was ‘convinced that one day, we will have Budapest in Warsaw.’ Once in power, PiS adopted practices and tactics that echoed those taken by its Hungarian counterpart. The most relevant were attacks on the rule of law, and specifically independent courts, but PiS also drew influence from ‘reforms’ pursued by Fidesz in the fields of media control and the electoral process.

The other prominent form is domestic legitimation. Given that Hungary was the frontrunner in the backsliding process in the EU, the Fidesz-led government was particularly interested in strengthening its legitimacy in the domestic arena. When sympathetic right-wing Polish politicians offered praise and support for the actions taken by Fidesz, often in joint appearances, speeches or interviews, these gestures were showcased by the Hungarian government as evidence that its measures were not only perfectly legal and justified, but also desirable. Such symbolic acts, typically accompanied by evocative political discourse, were then fed into the Hungarian pro-government media and disseminated to the public.

Nevertheless, the existence of this backsliding coalition does not presuppose that the two partners use it in the same way, nor that they agree on every policy issue all of the time. There are instances where there has been a conspicuous failure to support the other partner, such as when the Hungarian side refused to vote against Donald Tusk’s second term as European Council President, and PiS was left alone in fighting the nomination. The Hungarian government’s entanglements with Russia (mainly, but not only in the field of energy) have also been a source of discontent on the Polish side.

Both the Hungarian and Polish governments have promoted an identity-based narrative to justify their collaboration, namely, the trope of historic Hungarian-Polish ‘friendship’ between two likeminded nations. It is indeed true that there are some commonalities and intersections between the political histories of the two countries, expressed stereotypically in the phrase: ‘A Pole and a Hungarian, two good friends, they fight and drink together’. But both governments have constructed and disseminated a vastly overstated version of this purported bond, making ‘friendship’ the most recognisable discursive element of the Hungarian-Polish coalition. This makes for a powerful narrative to be mobilised against the EU, as the following quotation from a speech delivered by Viktor Orbán in 2019 makes clear:

‘When Poland is attacked from Brussels, the attack is against the whole of Central Europe – and us Hungarians. To empire-builders who seek to cast their shadow over Central Europe, we have this to say: they will always need to reckon with the strong bonds between Poland and Hungary.’

In truth, ideology, interests and institutions are much better placed than identity to explain this coming-together. The backsliding coalition was born out of the ambitions of political leaders who espouse similar ideologies and who have found collaboration useful for their projects. Despite the identitarian and value-based discourse that they often deploy when they refer to their relationship, its use has been quite opportunistic, especially on the Hungarian side. The EU’s own decision-rules have, to some extent, driven coalescence dynamics, too, as the requirement of unanimity for adopting any meaningful sanctions incentivises the construction of a narrow pact rather than broader support for one’s cause. This leaves us with a question: could backsliding coalitions become a permanent feature of the EU’s multi-level structure?

Adam Holesch is a Post-doctoral Fellow at the Institut Barcelona d’Estudis Internacionals (IBEI), an Adjunct Professor at the Universitat Pompeu Fabra and H2020 GLOBE Project Manager. In his research, he frequently goes up and down the ladder of multi-level governance, focusing on questions of nationalism and regionalism, solidarity, democratic backsliding and global governance, always related to the European Union.

A Yes vote for the Fiscal Treaty was the cheaper and safer option for Ireland. 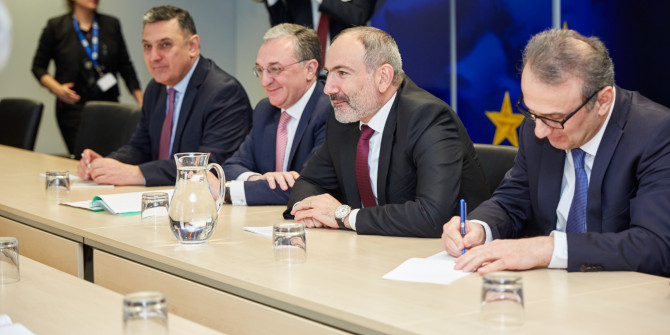