How can the resources made available through the EU’s Covid-19 Recovery Fund be used most effectively? Drawing on a new study, Riccardo Crescenzi, Mara Giua and Giulia Sonzogno write that it will be necessary for national governments to mobilise resources through the involvement of relevant stakeholders. To reduce the probability of implementation delays, projects should bypass regional governments in those states where delays are more likely, with citizens given direct involvement in the process through participatory procedures led by central governments.

The stability and prosperity of the European Union hinges on its ability to provide timely and effective measures to repair the damage caused by Covid-19 and prepare a better future for coming generations. Member states are now looking to the EU to provide coordinated answers and solutions to their citizens’ plight through its ambitious multi-billion euro recovery plan, also known as Next Generation EU. The use of common resources to foster recovery in all member states offers a unique opportunity to reinforce cohesion, resilience, and transformation in the EU.

However, the value added by EU membership is increasingly assessed in relation to the timeliness and effectiveness of public choices. In a recent statement in front of the European Parliament, Christine Lagarde (ECB President) indicated that “it is essential that the Next Generation EU funds are disbursed quickly and used to support structural reforms and growth-enhancing investment projects.” If Next Generation EU efforts to foster an inclusive recovery prove untimely or ineffective, Euroscepticism will be the natural answer for dissatisfied EU citizens.

Therefore, a key question for EU policy making is: which difficulties might hamper or delay the implementation of Next Generation EU? How can they be mitigated? These questions are relevant for all EU member states, but they are particularly pressing in those states that have a long history of implementation delays and slow absorption of EU resources. These states are often – as in the case of Italy – among the largest prospective recipients of Next Generation EU funds. Therefore, their failure to implement the plan in a timely manner would have major implications for the credibility of the entire EU-level initiative.

In a recent study, we addressed precisely these questions through an evidence-based approach to EU policy design and implementation. Our study looks at EU Cohesion Policy as a laboratory to explore what types of actions and projects, in principle, might be able to trigger the quickest response to Covid-19. 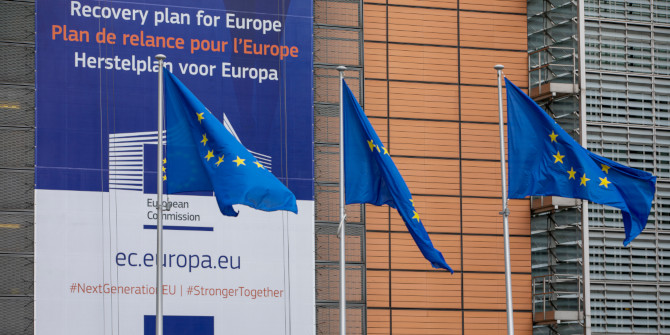 By leveraging unique administrative data on all individual projects funded by EU Cohesion Policy for the 2014-2020 programming period in Italy, we identified those projects that more closely resemble the objectives, functions and nature of future Next Generation EU interventions. We also uncovered the characteristics of these projects that are systematically associated with timely implementation. This makes it possible to ‘predict’ what types of projects – based on recent practical experience – are more likely to offer timely and concrete results while serving the new overarching objectives of the EU recovery plan. If timely implementation is not a sufficient condition for a successful intervention, time delays will certainly be part of any assessment of the initiative that researchers and citizens will be pursuing in the future.

This analysis makes it possible to depict the ‘ideal’ profile for Next Generation EU projects that have the capacity for prompt implementation. We can identify characteristics to be replicated (those associated with a lower probability of delays) or avoided (those associated with higher probability of delays) in order to provide projects with a timely implementation (as a precondition for a positive impact).

The ideal profile for Next Generation EU projects

Next Generation EU projects should be developed by the central governments of each member state in close cooperation with the EU and with the direct non-intermediated involvement of stakeholders and citizens active on the ground. Where possible, projects should be led by citizens with precise objectives and responsibilities (when beneficiaries are not personally visible and well-identified, e.g. in the case of regional public bodies, a lack of commitment and accountability can prevent success).

Projects that require multiple beneficiaries to work in collaboration with each other are not recommended, and neither are projects that require the coordination of multiple territorial areas in their implementation. Collaborations between different actors and/or different jurisdictions, identified as a tool for boosting networks, learning proximities and knowledge spillovers, can be effectively pursued at a later stage, when project implementation is already consolidated.

In translating resources into projects, it is crucial to look for a perfect match between the supply and demand side of the policy: central government should engage in a fruitful direct dialogue with stakeholders from the very beginning of the policy design process. The overarching EU-wide objectives of Next Generation EU should be kept aligned with the genuine, contemporary needs of the local economy through well-designed, centrally-managed participatory practices involving relevant stakeholders.

The initial direct implementation of Next Generation EU should ideally be coupled with intensive capacity building programmes aimed at reinforcing administrative capacity and efficiency while introducing modern managerial practices and simplification in the regions. After the initial stage of capacity building and urgent structural reforms (at both the national and regional level), the mobilisation of stakeholders – outside the blockages of local interest groups and the rent seeking behaviour of local incumbents – together with the reinforced capacity of sub-national governance bodies will ensure the smooth implementation of the second stage of the programme.

Clear ex-ante conditionalities on institutional and administrative capacity (including the use of e-government and simplified procedures) could regulate differentiated access to the second stage (and the associated funds) by each regional government or municipality. This two-stage approach would reconcile a timely implementation with the strategic contribution of sub-national governments and administrative bodies to the success of Next Generation EU.

Riccardo Crescenzi is a Professor of Economic Geography at the London School of Economics and is the current holder of a European Research Council (ERC) Grant. He is also an Associate at the Centre for International Development, Harvard Kennedy School of Government, Harvard University. He has provided academic advice to, amongst others, the European Investment Bank (EIB), the European Parliament, the European Commission, the OECD, and the Inter-American Investment Bank (IADB). His research is focused on regional economic development, innovation, Foreign Direct Investment (FDI) and multinationals and the analysis and evaluation of European Union policies.

Mara Giua is an Assistant Professor (tenure track) at the Department of Economics – Roma Tre University, and a Member of the Board of Directors of the Manlio Rossi-Doria Centre for Economic and Social Research, Centre of Excellence – Roma Tre University. She is also Visiting Fellow at the London School of Economics and a member of the OpenCoesione Team at the Italian Presidency of Ministries. Her research focuses on the economic disparities across regions, sectors and firms in Europe, and on the analysis of cohesion, internationalisation and agricultural policies of the European Union.

Giulia Valeria Sonzogno is a PhD Candidate in Urban Studies and Regional Science, Social Sciences, at Gran Sasso Science Institute. She is also a consultant for the Technical Committee for Inner Areas at the Italian Minister for Southern Italy and Territorial Cohesion. Her research interests include socio-economic and intergenerational territorial disparities, and the analysis of policies for the European Union and peripheral areas.

Sarko vs Juppé: Will the French right select a candidate who can stop Le Pen?