In Unsustainable Inequalities: Social Justice and the Environment, Lucas Chancel demonstrates the role that economic inequality plays in maintaining social injustice and environmental unsustainability, exploring ways to better balance the reduction of socio-economic inequality and the strengthening of environmental protections. This is an accessible, relevant and thought-provoking analysis that uses well-presented facts and figures to unpack the intricate relationship between social injustice and environmental harm, finds Gayathri D. Naik.

If you are interested in this book, you can listen to or watch author Lucas Chancel in conversation with LSE’s Dr Alina Averchenkova, recorded at an October 2020 online event hosted by LSE’s International Inequalities Institute. 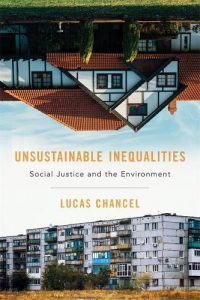 Note: This article first appeared at our sister site, LSE Review of Books. It gives the views of the author, not the position of EUROPP – European Politics and Policy or the London School of Economics. Featured image credit: Markus Spiske on Unsplash