The German party system has become increasingly fragmented in recent decades, following years of relative stability. Drawing on a new book, Fernando Casal Bértoa and Zsolt Enyedi illustrate the factors that have driven this process of destabilisation.

The best kept secret of the 2021 German elections is that the ruling parties were re-elected. In principle, Germany could continue with the so-called GroKo coalition between the Christian-democratic CDU/CSU and the social-democratic SPD. But hardly anyone is contemplating such a possibility. The months preceding the elections were dominated by the tacit, and almost universally shared, agreement that the country needs a new government.

In typically institutionalised party systems, citizens choose among a limited number of governmental alternatives. Germany used to have a quintessentially stable system, where the choice was confined to a centre-right coalition, led by the CDU/CSU, a centre-left coalition, led by the SPD, and a grand coalition between these two parties. Conversely, in September Germans were confronted with a bewildering set of options.

Because all German parties have colours (CDU/CSU: black; SDP: red; the liberal FDP: yellow; the radical-left Linke: red; the radical-right AfD: blue; the Greens: no prizes for guessing), and because German voters tend to think of flags when they hear about possible coalition combinations, government alternatives are often associated with national flags. Jamaica refers to a coalition between the CDU/CSU, FDP, and Greens; Kenya (or Afghanistan) refers to the CDU/CSU, SPD, and Greens; and Germany refers to the CDU/CSU, SPD, and FDP. An SDP, FDP, and Green coalition could be labelled Lithuania, but it is most popularly known as a ‘traffic light coalition’.

A fifth – at least theoretically possible – combination would be a coalition between the CDU/CSU, FDP and AfD. While this Bahamas coalition would command a clear majority in the Bundestag, it is considered taboo in practice, as the 2020 Thuringian government crisis clear demonstrated. The Free State of Thuringia is also an example of another possible formula, which is a favourite among leftist voters, between the SPD, Linke and the Greens. Ultimately, this – for some reason not called Transnistria but red-red-green – coalition failed to obtain a working majority, not even with the support of the Danish minority party the SSW, which is in parliament for the first time since 1949.

What this overview shows is that the 2021 German federal elections were unusually open-ended. The once closed, highly structured German party systems showed its open, unpredictable face. The question an observer might justifiably ask is: how did German politics, an oasis of stability and predictability until recently, arrive at such a state? In a recent book looking at the causes and consequences of party system institutionalisation in Europe since 1848, we provide a partial answer by describing the causal chain that led to party system destabilisation in many European countries, including Germany.

In our analysis of the process of party system development and stabilisation in 47 European countries, we show four factors that push political parties to behave in a predictable and structured manner: democratic experience, party institutionalisation, low levels of parliamentary fragmentation, and polarisation.

We find that voters will be able to choose among clear and well-established government alternatives when certain conditions are met. These conditions are for democracy to become ‘the only game in town’, for political parties to be socially rooted and organisationally strong, for the number of ‘effective’ parties in parliament to be no higher than four, and for the level of support for anti-political-establishment parties (e.g. populist and radical parties) to be lower than 10 percent.

On the contrary, when citizens are dissatisfied with democracy, parties come and go, new parties manage to obtain parliamentary representation and extreme parties manage to attract substantial electoral support, party systems remain in flux and government formation turns unpredictable. This logic is applicable to Germany.

From stability to instability

The figure below summarises the history of German party politics since 1949 and depicts what we call ‘the royal route’ to party system stability. Given its peculiar circumstances (occupation, territorial division, etc.) democracy in West Germany became ‘the only game in town’ almost from the very beginning. As a result, the party system soon became a three-party contest between the Christian democrats on the right, the social democrats on the left, and the liberals in the centre.

Finally, and especially as a result of the banning of both the neo-Nazi and Communist parties by the Constitutional Court in the 1950s, the German party system developed a centripetal and ideologically moderate structure of competition where CDU/CSU-FDP coalitions alternated with SPD-FDP ones. The contrast with the inter-war period, also shown in our book, could not have been starker as Germany left behind an era of coups, weak parties, high fragmentation and towering polarisation. 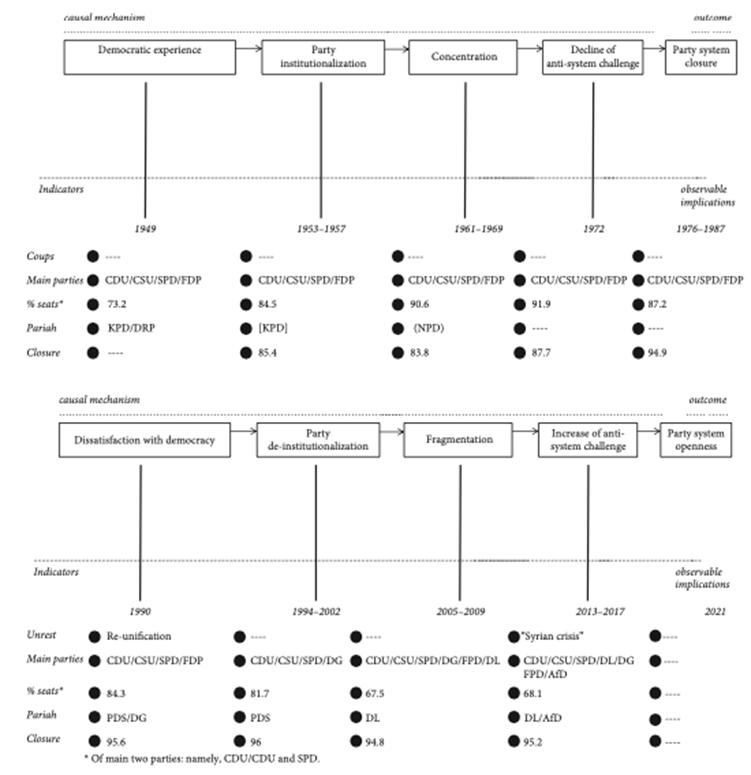 Things started to change after the German reunification in 1990 when five new federal states, with more than half a century of authoritarian experience, were incorporated into the Federal Republic. The post-communist political space converged into the Left (Linke), while the merging of various environmental groupings resulted in the rise of the Greens. The number of parties grew, polarisation increased (especially after the refugee crisis), and the traditional parties (CDU/CSU, SPD and FPD) shrank. These developments prepared the ground for a change in the structure of inter-party competition and led to the proliferation of viable governmental alternatives.

Currently the Lithuanian or ‘traffic light coalition’ is the most likely combination. History seems to be on its side, too. First of all, while the SPD has been in coalition with both the FDP and the Greens, there is no history of a government coalition between the Greens and CDU/CSU. Secondly, in 16 out of the 19 elections held since 1949, the Chancellor came from the winning party. Thirdly, the last time when a Chancellor did not stand for reelection (Helmut Schmidt in 1982), the opposition won the election and formed the government.

No matter what the final combination will be, German politics is doomed to remain unpredictable for some time and party system instability might become the new normal. It seems as if time has finally come to follow Goethe’s dictum: “We must always change, renew, rejuvenate ourselves; otherwise, we harden”.

Fernando Casal Bértoa is an Associate Professor in the School of Politics and International Relations at the University of Nottingham.

Zsolt Enyedi is a Professor in the Political Science Department and Senior Researcher in the Democracy Institute of Central European University (CEU). 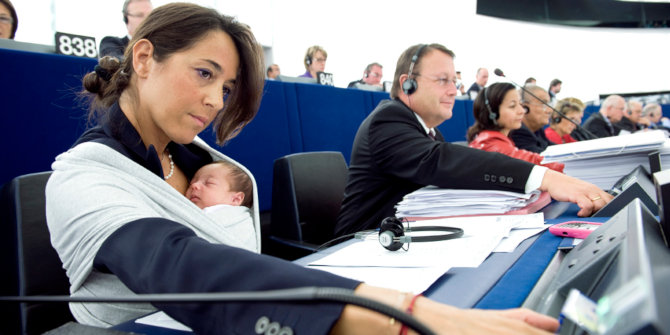