The revitalisation of trade unions should be a central component of any left-wing project. To see why, we may look at some of the recent evidence in comparative political economy. In economic terms, stronger trade unions have helped to reduce income inequality, both at the top-end (reducing the share of the super-rich) and at the low-end (reducing poverty). At the same time, they have mitigated precarious employment and welfare standards, in the policy-making as well as in the industrial relations arenas.

However, strong trade unions not only reduce vertical inequality between the rich and poor, but also horizontal inequality with respect to gender and ethnicity. Although often portrayed as white, male organisations rooted in shrinking manufacturing sectors, it is women of colour that stand to gain most from union membership in the racialised context of the United States.

In addition to their economic role, trade unions are important actors in political terms. Union members are more likely to participate in elections, to vote for the political left, and have higher preferences for redistribution. Consequently, as trade unions lose members among the lower strata, they become a less powerful force for redistributive policies. Taken together, strong unions are an effective counterweight against inequality, racism and sexism by redistributing wealth and thus power.

While a strong union movement remains central for the political left, the political context in which trade unions operate has changed dramatically, which may invite us to rethink the political role of trade unions. In the industrial era of the 20th century, trade unions benefitted from strong organisational and political links to centre-left parties, typically of a social democratic character.

While the former mobilised working-class votes and resources, the latter provided political influence in parliament. This was one of the core assumptions of Walter Korpi’s power resource theory, according to which strong ties between the ‘industrial’ and ‘political’ wing of the labour movement ensured mutual gains. His native post-war Sweden was a textbook example of the virtues of this political alliance.

In the post-industrial context of the 21st century, however, trade unions may no longer bet on their traditional allies. As the electoral class and family basis on which parties compete has changed dramatically – i.e. in the wake of de-industrialisation, globalisation, immigration and growing female labour participation – mainstream parties of the left and right have lost their predominant position in favour of new challenger parties, typically the nativist radical right and new liberal/green parties.

In this context, social democratic parties not only lost the necessary political clout to provide unions with privileged policy-making influence. They also detached themselves from organised labour ideologically, in search of a more market-conforming ‘Third Way’ that aimed to account for the competitive pressures of globalised capitalism, but also in response to the growing share of new middle class professionals who were meant to benefit from it.

Adam Przeworski provides a succinct account of how the neoliberal mantra of ‘competitiveness’ gained hold at the expense of transformative social democratic goals: “As the right moved to the right, the left moved even farther to the right, and the economic policies of the centre-left and the centre-right became almost indistinguishable. Social democrats embraced liberalisation of capital flows, free trade, fiscal discipline, and labour market flexibility, abstained from counter cyclical policies and from using most industrial policies.” As a result, trade unions were either sidelined by their traditional allies or felt obliged to sell bad policy deals as a matter of social democratic loyalty.

There is a power-strategic calculus behind this anti-labour front: whereas centre-right parties have traditionally aimed to undermine union power in order to facilitate cuts in labour market protections, the radical right attacks trade unions as a way of weakening the extra-parliamentary support base of their social democratic competitor for the working-class vote. If trade unions develop a more independent profile, the power-strategic incentives for the radical right to undermine trade union power are reduced as well.

The merits of independence

A more independent trade union outlook would not only reflect the political realities of social democratic decline and party system fragmentation; it would also facilitate much-needed revitalisation strategies. Unlike political parties, trade unions cannot prop up their dwindling finances by relying on public funds and wealthy donors. And even if they could, they should refrain from that anyway.

As Peter Mair argued, the ‘withdrawal’ of party elites from their grassroots into the state has contributed to the growing disconnect between civil society and the mainstream parties, opening the door for populist challengers that emphasise a growing distance between ‘the people’ and ‘the corrupt elite’. By prioritising social democratic loyalty over political independence, the union movement becomes vulnerable to similar populist accusations that undermine their moral credibility, especially among younger voters who typically display lower levels of (social democratic) party identification.

The fragmentation of party systems may in fact create new opportunities for organised labour to regain a more central role in policy-making. Today’s governments are often based on unstable multiparty coalitions, including parties from the socio-economic left as well as the right. In Germany, for example, the social democrats are currently negotiating a coalition agreement with the pro-business FDP and left-liberal Greens.

At the same time, the formation of minority governments has become more commonplace too, especially in the Nordic countries. In this context, as I show in a recent book, governments may well lack the internal unity and parliamentary support to pursue a unilateral reform strategy that would exclude trade union demands. On the contrary, trade union influence in public policy may see a revival under these conditions because weak governments are more likely to need extra-parliamentary support for economic problem solving and political consensus building. This is also a central finding from the literature on the formation of tripartite social pacts between organised labour, business, and the state.

What all of this suggests is that while trade unions may certainly find common ground with social democratic parties, they are overall more likely to gain political influence when they adopt a more pragmatic approach and seek for situational coalitions with any government and party that comes close to their policy goals. To do that, they need to loosen their ties to social democratic parties and stay independent of party politics.

For more information, see the author’s accompanying study in the Journal of European Public Policy. This article was originally published in Spanish at Agenda Pública.

Philip Rathgeb is Lecturer (Assistant Professor) in Social Policy in the School of Social and Political Science at the University of Edinburgh. His work falls in the areas of comparative political economy and comparative politics, with a particular focus on welfare states, labour markets, and party politics. His book Strong Governments, Precarious Workers was published with Cornell University Press. 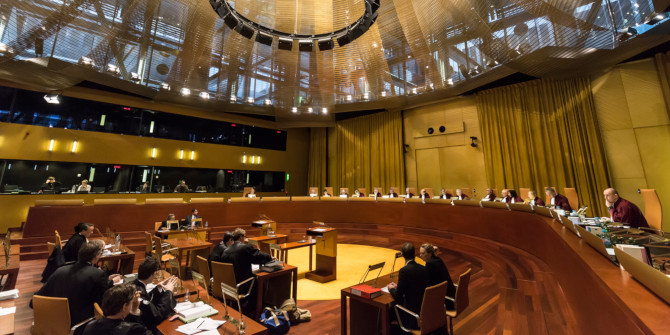