On 22 January, Friedrich Merz was elected as the next leader of Germany’s Christian Democratic Union (CDU). Marco Bitschnau argues that any expectation the CDU will move sharply to the right under Merz is misguided. There is likely to be substantial continuity with the Merkel era.

When newly elected German Chancellor Olaf Scholz faced the TV cameras on 31 December, delivering a traditional New Year’s address to more than 83 million Germans, there was a noticeable sense of disbelief in the air. For a long sixteen years, the public had been spoiled by the serenity of Angela Merkel’s voice, the resplendence of her pantsuits, and the motherly equanimity of her demeanour. Now, it found itself listening to a stern-looking man in a dark suit who only a year earlier hardly anyone had expected to become the country’s next leader.

While this moment may have been a highlight in Scholz’s political career, it would have been a bitterly disappointing one for Armin Laschet. Following defeat in the 2021 federal election, Laschet submitted his resignation as leader of the Christian Democratic Union (CDU). On 22 January, it was confirmed that Laschet’s successor would be Friedrich Merz.

Merz has long been considered an enfant terrible of German liberal conservatism. He has twice sought the CDU leadership in the past, but was defeated on both occasions: first by Annegret Kramp-Karrenbauer, then by Laschet. This time, he finally prevailed, overcoming half-hearted challenges from Merkel confidant Helge Braun and the former Environment Minister, Norbert Röttgen.

To many, Merz’s election denotes a stylistic and substantial break with the departing Chancellor and there have been numerous efforts to paint him as an anti-Merkel of sorts: an aloof conservative trapped in outdated Cold War fantasies; an incorrigible chauvinist who once campaigned against the criminalisation of marital rape and makes no secret of his traditionalist leanings; and a heartless neoliberal who has written books like Vom Ende der Wohlstandsillusion (The end of the prosperity illusion), a copy of which he once sent to a homeless man as finder’s fee for retrieving his laptop.

It seems intuitive to deduce that the CDU may move considerably to the right under his leadership – less Mutti, more markets, less compromise, more contestation. It has been speculated that we may even see the first cautious attempts to engineer informal state-level alliances with the far-right AfD. But while the narrative of a rightward shift is quite popular, especially in the Anglosphere, it is flawed in so far as it mistakes rhetorical recklessness for strategic repositioning and grants far too much importance to Merz’s supposed beliefs.

Almost three years ago, Luuk Molthof argued that “Germany is still a relatively centrist country” where “the continued appeal of (Merkel’s) politics shouldn’t be underestimated.” Although he mistakenly conceived of the CDU’s leadership struggle as a battle between centrists and conservatives – when it is more about personal animosities and career prospects – the essence of his analysis remains valid. There is still no indication that abandoning Merkel-style moderation in favour of a more robust conservatism is on the cards, nor that it would pay off electorally. To the contrary, it may scare off a sizable portion of the liberal centre and damage the party in the long run.

It may… appear ironic that the man who once styled himself as a fierce critic of the outgoing Chancellor could now become the de facto custodian of her legacy. But far stranger things have happened in politics.

This does not mean that the status quo is here to stay. With a volatile three-party coalition in power, some adjustments to the CDU’s messaging are inevitable – such is the nature of opposition politics. Yet applied Merkelism has long surpassed the stage of being a strategic choice to which an alternative can be provided instantaneously. It may be modified to a certain extent, but it is hard to see any realistic option to go back behind the transformative modernisation of recent years. And Merz seems to feel the same. Like most high-level CDU politicians, he is a pragmatist first and foremost; someone who may evince his personal preferences but is still conscious of the limitations imposed on his office. And in the end, he simply goes with whatever works best.

It should thus not come as a surprise that, since returning to the political arena, his focus has been on allaying fears of a potential right-wing turn. He has repeatedly complimented the Greens, his nemesis of old, calling the party “disciplined and very profound” and praising its diverse membership (“We do not have enough young party members […] and not enough women”).

At the same time, he does not get tired of ruling out any cooperation or partnership with the AfD. “Whoever raises their hand [to work with them], will be facing expulsion proceedings the very next day” he asserted in December, reiterating a previous statement in which he had labelled the party as “Nazi” and rife with antisemitic tropes. He has also apologised for homophobic remarks made in the past and even committed himself to granting the CDU’s LGBTQ association, the Lesben and Schwule in der Union (LSU), the status of Sonderorganisation (special organisation): a move that Merkel never really considered.

In brief, Merz has so far shown less reactionary zeal than willingness to follow in his predecessor’s footsteps. It may admittedly appear ironic that the man who once styled himself as a fierce critic of the outgoing Chancellor could now become the de facto custodian of her legacy. But far stranger things have happened in politics and, if anything, it once more proves that the determinative power of structural conditions and integrative necessities is far greater than that of an individual’s position on the centrism-conservatism axis. Most recently, Merz also extended conciliatory words to Merkel herself, remarking self-critically that his camp had “completely underestimated her.” Not exactly the stuff counterrevolutions are made of.

In any case, it is the right call. There is little to be gained from continuing old feuds when the CDU is in an historically weak position, not only losing the Chancellorship but also ranking as an underdog in the next round of state elections. Right now, the party leads the government in all three states heading to the polls this spring – Saarland, Schleswig-Holstein and North Rhine-Westphalia (although in quite different coalitions) – and in each of them, it is on the defensive, with its Minister-Presidents fighting for nothing less than their political survival. It will be Merz’s first real challenge to prevent a clean SPD sweep and save what can be saved at the state level. But he will do so as leader of a party that is still fundamentally Merkelian.

Note: This article gives the views of the author, not the position of EUROPP – European Politics and Policy or the London School of Economics. Featured image credit: MSC, Munich Security Conference (CC BY-NC-ND 2.0) 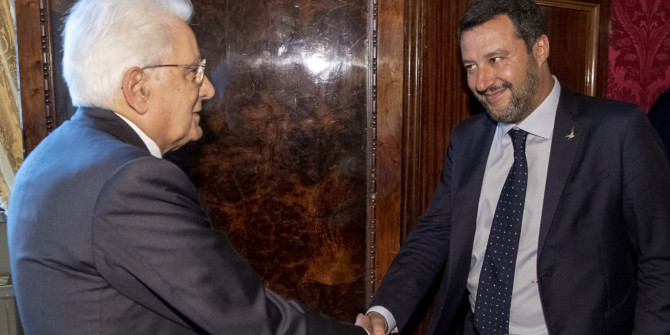