The concept of a universal basic income has received increased attention since the start of the Covid-19 pandemic. But what do the public think about the proposal? Drawing on a new study, Leire Rincón illustrates that a key factor affecting support for a universal basic income is the way it is funded, with more people likely to back the policy if it is funded by increasing taxes for those on higher incomes.

Support for a universal basic income is one of the key political puzzles of our time. This once utopian idea, mainly advocated by philosophers and writers, is now an increasingly viable alternative with rising salience in political and public debates. Defined as a universal, unconditional, and individual cash payment made to all of the population with no strings attached, the concept stands in stark contrast to the orthodox approach to welfare which mainly relies on means-testing or conditional cash transfers.

The Covid-19 pandemic has prompted unprecedented interest in the potential benefits of a universal basic income, and there has been a notable rise in support for the policy. Yet, we know little about what determines support for the proposal. Previous studies have shown that support is higher in some countries than others, and that being unemployed, on a low income, young, and left-wing increases support.

These studies, however, cannot fully unveil the dynamics behind support for the policy. What is it about a universal basic income that generates support or opposition? What feature is particularly appealing to individuals and what are the aspects that reduce support? Current work, which mostly relies on survey data, is not equipped to decipher this. Traditional survey questions typically ask respondents to give a rate of support for the overall definition of a universal basic income, hence, they bundle up a series of features and it is difficult to disentangle the rate of support.

Theoretically, I propose a simple yet novel argument concerning the origins of opposition to a universal basic income. Because a universal basic income’s most characteristic features of universality and unconditionality present a radical departure point from the orthodox welfare rationale of giving to those in need or who are deemed deserving, it is likely that these are the features that generate the greatest resistance from the public. Additionally, I argue that this is especially the case if a universal basic income is funded by reducing current welfare expenditure.

I find that this is only partly the case. Universality does reduce support for a universal basic income, but not unconditionally (see Figure 1). Individuals prefer targeting those in need rather than having a universal cash transfer for everyone. Nevertheless, when it comes to establishing behavioural conditions, respondents are much less sensitive to the kinds of conditions that are imposed. Other important features of a universal basic income, like the fact it is received on an individual basis, the level of its generosity, or the associated legal requirements, play only a minor role in securing support for the policy. 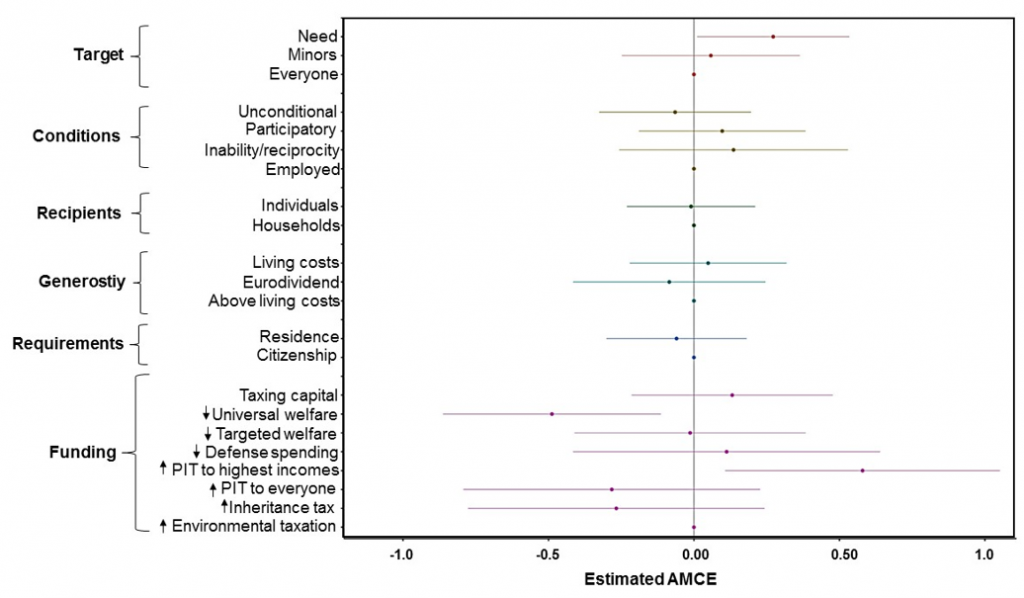 Note: The figure shows ‘average marginal component effects’ (AMCE) of support for different features of cash transfer systems. These features are separated into categories with the last feature in each category acting as a baseline. The dots indicate whether average support for this feature is higher or lower than the baseline feature in each category and the extended lines show 95% confidence intervals. Findings are significant when the whole of the line is located either above or below the middle line (0.00). For instance, funding cash transfers through a personal income tax (PIT) on those with the highest incomes significantly increases support as the horizontal line is located entirely above 0.00 in the ‘funding’ category.

Crucially however, I find that funding mechanisms matter greatly to support for cash transfers in general and a universal basic income in particular. Support for cash transfers is significantly reduced when these transfers are funded by reducing existing welfare expenditures. This suggests that if a universal basic income or another form of cash transfer replaced existing welfare systems then it may struggle to gain the support of the public. Conversely, funding a cash transfer system by increasing personal income tax for those in the highest income thresholds is found to boost support more than any other feature. This suggests there is strong demand for a redistributive cash transfer system.

Picking up on the finding that it is universality that undermines support, I move on to explore the conditions under which support for this feature may develop (see Figure 2). I find that essentially no design element has the potential to increase support for universality. Contrary to an intuitive expectation, attaching behavioural conditions to a universal cash transfer does not increase support for this feature. However, restricting eligibility criteria to citizens as opposed to residents does generate significantly more support for universality. Benefit generosity does not matter greatly, but I do find that low quantities are unpopular.

Figure 2: Support for universality when combined with other features 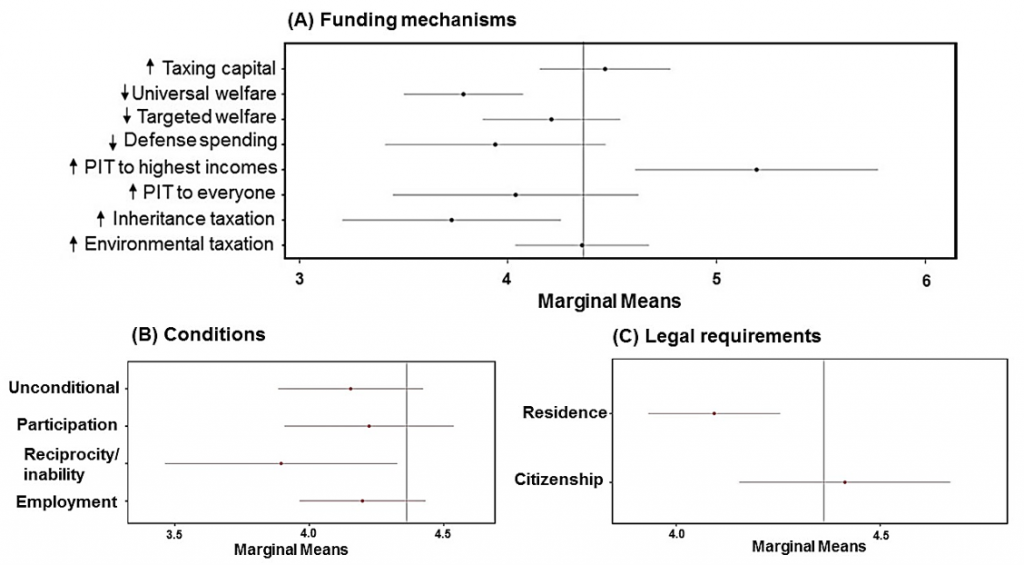 Note: The figure shows the ‘marginal means’ (an indication of average support for each feature) when features are combined with universality.

The implication of this latter finding is that a proposal with symbolic quantities such as a euro dividend may struggle to win the backing of the public. One potential explanation for this is that the public are unlikely to see the merit in a cash transfer that includes everyone, including those who may not need it, and which is of such a small quantity that it would not allow those who actually need it to meet a level of subsistence.

Finally, and most importantly, I find that how a universal cash transfer is funded greatly affects the support it may receive. Reducing existing universal welfare expenditure as part of a new cash transfer system compromises support, but increasing taxes for those on higher incomes is popular. Crucially, the latter funding mechanism is enough to make universality as popular as targeting benefits to those in need. The key finding of my study is therefore that there is potential public backing for a universal cash transfer that is funded by taxing those on higher incomes.

However, this is not the end of the puzzle. Taxing the rich may be rooted in a demand for redistribution, but it could also be the case, as some previous research has indicated, that this finding reflects the perceived costs of social policies. Misperceptions on the position that one occupies in the income distribution are commonplace, and rarely do individuals self-identify as being ‘rich’. Hence, this demand for higher taxation may indicate a desire for redistribution but equally it could emerge from material self-interest.

Future research should explore the mechanisms underpinning these preferences and identify the key supporter coalitions behind the different cash transfer proposals on the table. In the meantime, my study shows that policy design and the funding structure of cash transfers are a key factor in shaping public support.

Note: This article gives the views of the author, not the position of EUROPP – European Politics and Policy or the London School of Economics. Featured image credit: Anne Nygård on Unsplash

Leire Rincón is a Post-Doctoral Researcher at the Chair of Political Sociology and Social Policy in the Department of Social Sciences at Humboldt University. 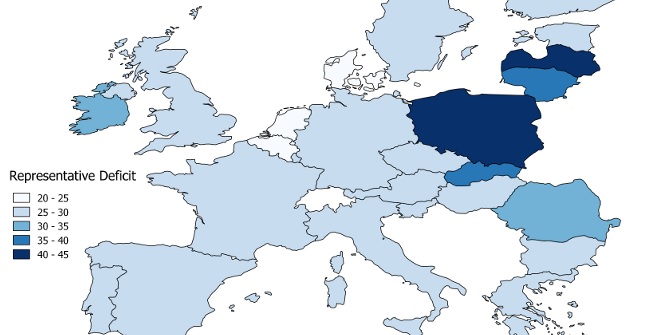 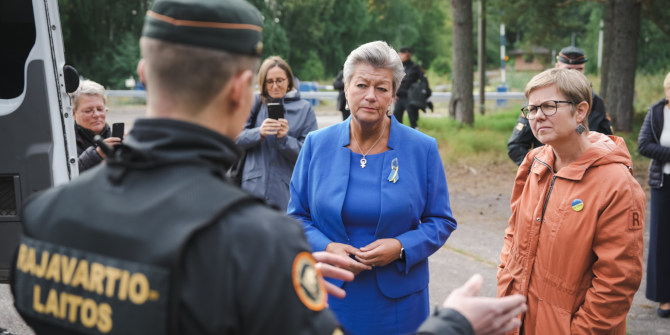