In the wake of several surprising 2021 election losses in Europe, has the Covid-19 pandemic damaged leaders’ electoral prospects? Brett Meyer presents evidence that populist leaders in Europe are more likely to be punished at the polls than non-populist leaders, as are leaders in countries with lower pre-pandemic levels of trust.

The last twelve months were a surprisingly tumultuous electoral year in Europe, with heads of government losing power in Bulgaria, the Czech Republic, Germany and Norway, and the leaders of both Austria and Italy resigning. Some of these developments would have appeared extremely surprising at the beginning of the year, including the SPD’s victory over the once dominant CDU in Germany and populist Andrej Babis’ loss in the Czech Republic.

Country-specific analyses of these losses have focused on a variety of factors, including corruption and party leader gaffes. There has been less focus on the role the Covid-19 pandemic might have played, despite waves of infections spreading across much of Europe in 2021, driven first by the Delta variant and then by the new Omicron variant towards the end of the year.

Eastern Europe, which was largely spared during the first wave of Covid-19 in spring 2020, was hit hard by the autumn and had some of the highest death rates in the world by early 2021. There have been several waves of political discontent over a variety of accompanying issues, including slow rollout of vaccines and what many perceive to be excessive lockdowns.

While it is difficult to assess whether Covid-19 caused the election losses we saw in 2021, it is possible to investigate how support for governments changed throughout the pandemic. To do this, I assembled polling data for all parties in government in 23 EU countries plus the UK from January 2018 through November 2021 and merged this with data on case and death rates from Johns Hopkins University.

In Figure 1 below, I plot average support for all parties in government against average monthly Covid-19 deaths. Support for governments goes up during the first wave of deaths, consistent with a rally-around-the-flag effect that I found for eight western European countries in research in autumn 2020. But after this, government support shows the opposite relationship with Covid-19 deaths, decreasing slightly as the second wave peaks but then increasing again as it recedes. 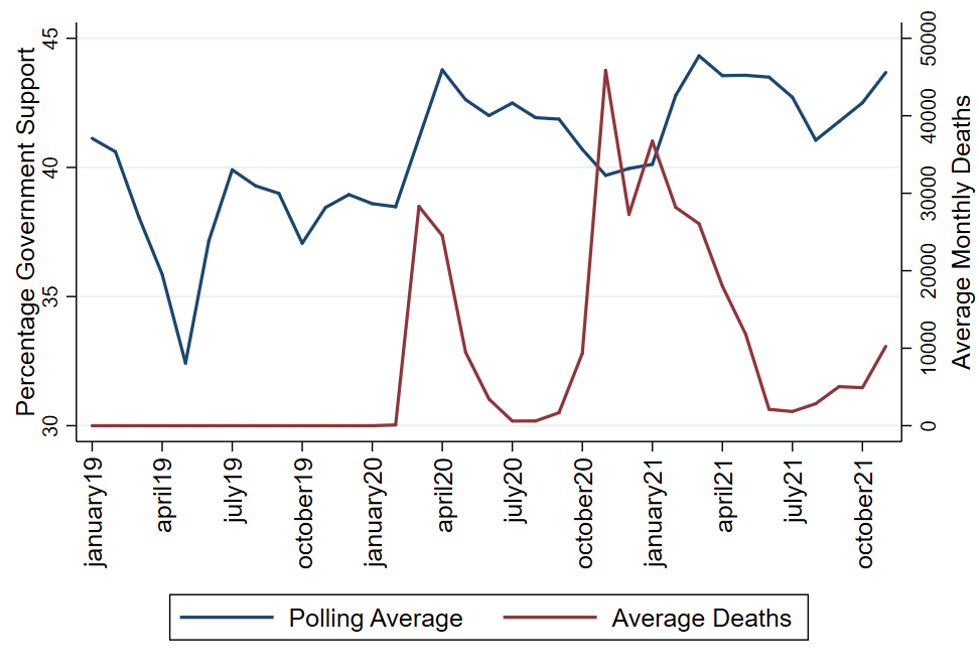 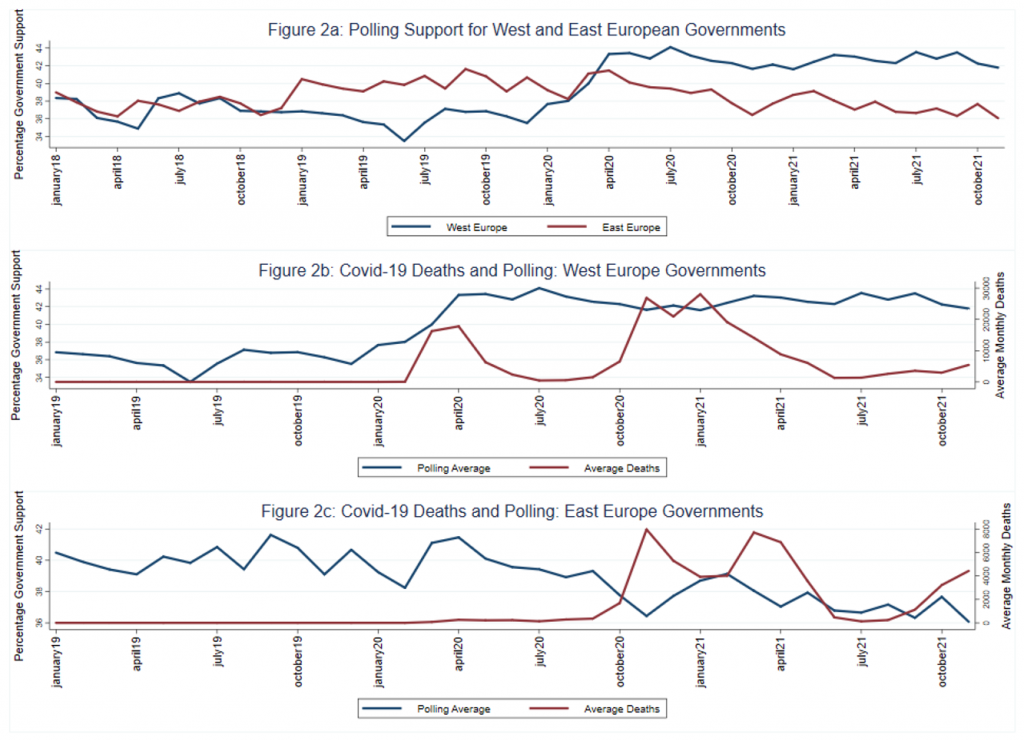 Figure 3: Trust and change in support for government 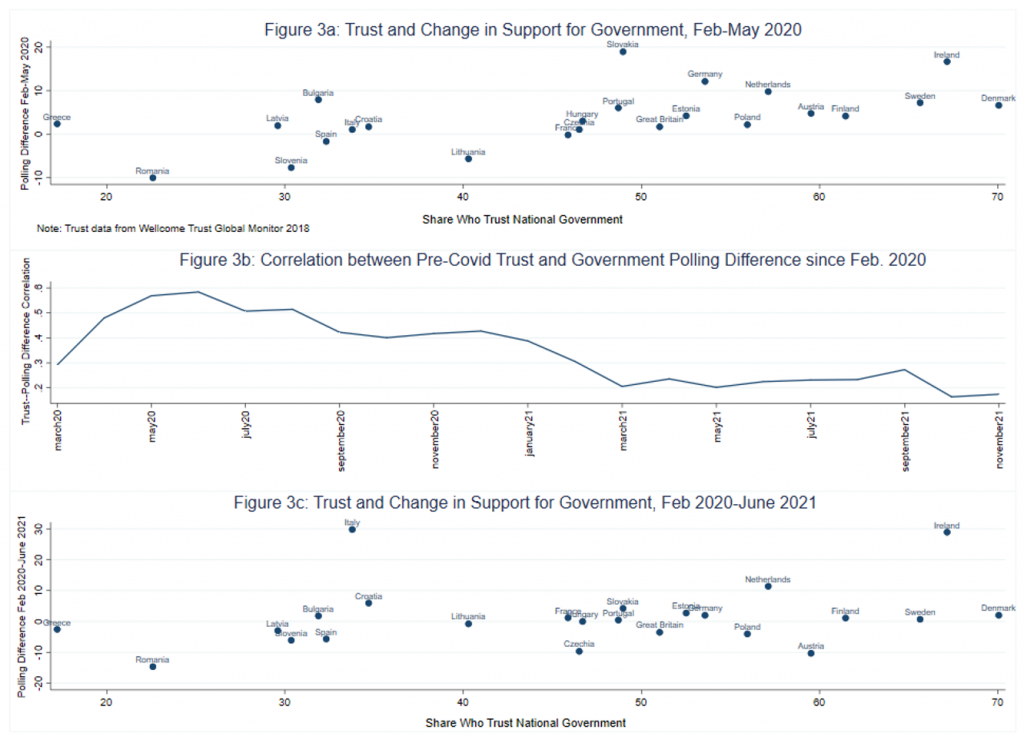 Finally, three of the five leaders who lost power in 2021, those in Bulgaria, the Czech Republic, and Italy, were populists. We might expect populist leaders to poll poorly in a pandemic as citizens are reminded of the importance of seriousness and expertise in government. Indeed, the number of populist leaders in power around the world at the beginning of 2022 has fallen to 13, the lowest since 2004. Although I found last year that all populist leaders in these countries took Covid-19 seriously during the first few months of the pandemic, their reputations for populist decision-making may have hurt them as the outcomes of the pandemic became worse.

Populist leaders had been polling ahead of non-populists before Covid-19 but then fell behind, continuing their decline as death rates increased. While this trend reversed at the end of 2021, by this time, two of the six populist leaders in office at the beginning of the pandemic had lost power (in Bulgaria and Italy). A third, Andrej Babis of the Czech Republic, would leave office in December. As Figure 4 shows, there is a clear correlation between rising Covid-19 deaths and a decline in support for populist governments. This effect does not exist to the same extent for non-populist governments. 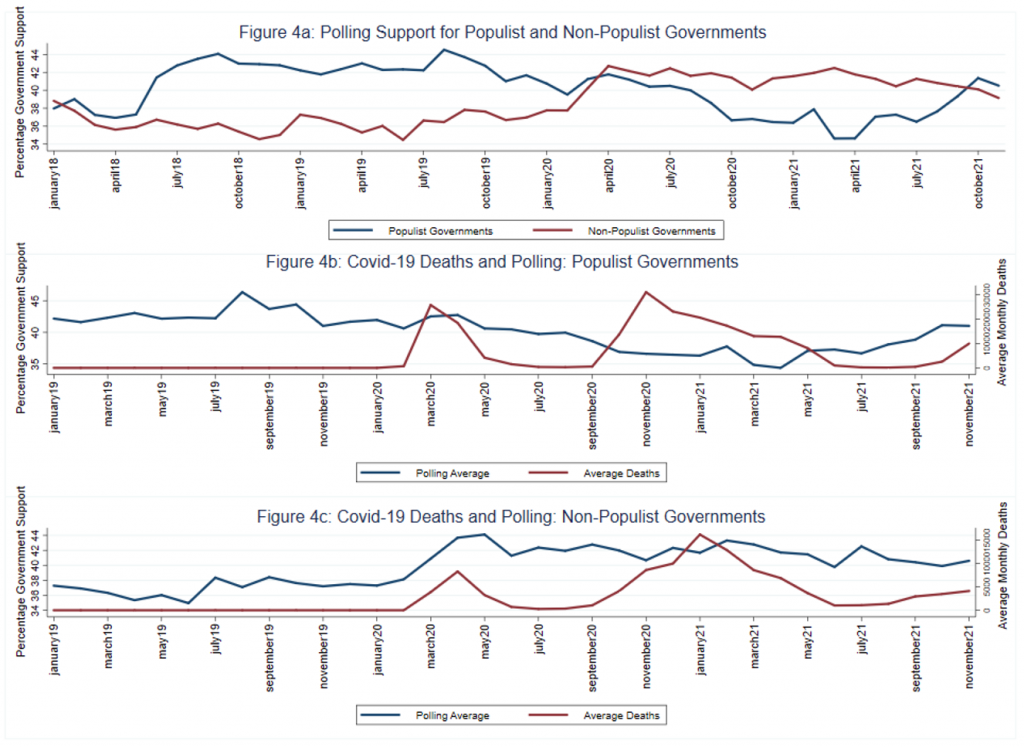 These results suggest that citizens’ pre-Covid-19 perceptions of their countries’ leaders affected their assessments of their leaders’ actions during the pandemic. Trust in government was higher before the pandemic in western Europe, which may have triggered and helped maintain the initial increases in support for governments while support receded for governments in eastern Europe – even before Covid-19 deaths began to increase. A reputation for divisiveness and eschewing expertise may have made citizens more critical of populist leaders, even though their pandemic responses were similar to those of non-populist leaders.

Brett Meyer is a Research Fellow at the Tony Blair Institute for Global Change. He was previously a Postdoctoral Fellow in the LSE’s Government Department from 2015-18.