In Value, Conflict, and Order: Berlin, Hampshire, Williams, and the Realist Revival in Political Theory, Edward Hall reads the work of Isaiah Berlin, Stuart Hampshire and Bernard Williams in the context of a realist revival in political theory, explaining how their theories fit with realist thinking and how realism in political theory can profit from their ideas. Hall’s careful, critical reconstructions of the central contributions of these three theorists is required reading for anyone interested in the realist way of thinking about politics, writes Mario Clemens. 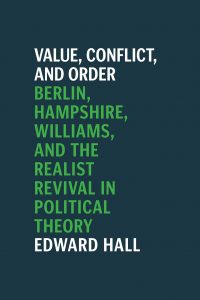 Politics in the face of the COVID-19 pandemic has made it painfully clear: preserving one good, such as freedom, can (and often will) mean sacrificing another – say, health. Moreover, this tragic element inherent to politics is reinforced by the limited power of deliberation. Even the (presumably) best arguments (for example, concerning vaccination) may leave a substantial fraction of the people unconvinced. So, what is to be done?

The first step towards good politics is to accept these realities and resist the temptation to wish them away. This, at least, is what so-called ‘realists’ in political theory argue. According to them, ‘we ought to see politics as a response to the human condition that reflects the need to come to binding decisions on subjects considered to be of public concern, when deep disagreements exist on a host of things’ (3). Political theorists that start from supposedly universal principles that are then used to reason about and criticise actual political conditions and arrangements are, political realists argue, not only bound to produce impractical suggestions. The more severe problem, they claim, is that using such ideal theory approaches ‘stops us from making sense of the distinctive goods of political life and the principles that are appropriate to it’ (2).

In his highly accessible and rewarding new book, Edward Hall, a political theorist at the University of Sheffield, engages with three leading British thinkers of the recent past: Isaiah Berlin, Stuart Hampshire and Bernard Williams. Hall reads them in the light of a ‘realist revival in political theory’, explaining how their theories fit into realist thinking and showing how realism in political theory can profit from the ideas of these three great thinkers. Hall has himself participated in what he at one point describes as a recent ‘realist turn’ in political theory, such as with his 2017 article ‘How to do realistic political theory (and why you might want to)’.

Unsurprisingly, Hall is not content with reviewing the realist revival in political theory in this book, but intends to push the argument further by engaging with some of the open flanks of the realist approach.

Realism in political theory, according to Hall, has been accused of being merely negative in nature, of pointing out (alleged) difficulties in other approaches while failing to offer arguments for viable alternatives. Therefore, Hall aims to show how Berlin, Hampshire and Williams contribute positive insights that can complement the negative claims of realism.

The book’s programme is well captured in its title, Value, Conflict, and Order. Hall’s discussion of Berlin concentrates on ‘value’. Berlin’s influential idea of value pluralism holds that political life is shaped by the existence of competing values, such as liberty, equality or security. Berlin’s insight that those values are in principle incommensurable – in the sense that there are no yardsticks against which to compare their respective worth – has two critical implications. First, that politics is characterised by real trade-offs (more equality does not result in some higher form of freedom, as some would have it, but will usually mean an actual loss of freedom, potentially justified, but a loss nonetheless). Second, Berlin’s value pluralism implies that disagreements over how we should live our lives, organise our political communities or which policy is preferable in a given case are in principle (though not always in reality) unsolvable, as there can be equally good arguments for each set of competing claims.

Hall sees this view as congenial, or even foundational, for realist thinking. Therefore, he holds that the question inevitably raised by value pluralism – how pluralism can be recognised without falling into relativism – also concerns all realists. By way of a critical engagement with two of Berlin’s own answers to this question, Hall arrives at a first positive suggestion. In his view, ‘if pluralists [and, by implication, realists] want to reject relativism, they must focus on the minimum content of natural law’ (45).

Hall’s treatment of Stuart Hampshire is organised around ‘conflict’. Hampshire shares the value pluralist view of Berlin but, according to Hall, has more to say on its political implications. Hampshire, in Hall’s view, is a valuable source for any realist because while sharing the realist view that there cannot be political consensus on (even basic) values, Hampshire also provides positive suggestions for how to deal with this challenging condition.

Hampshire’s position is that while there cannot be universal agreement on substantive issues, a set of universally shared procedural norms exists. While Hall is sceptical whether this is actually the case, he does find Hampshire’s approach of turning to procedural norms generally helpful. He praises him for recognising ‘that the central issue is how we can live with other people who value competing goods without our conflicts descending into violence and disorder’ (111).

From Williams, Hall extracts insights about the importance of ‘order’ for any functioning political community and thus further material for filling another gap in the realist argument. Realists are known to reject the liberal idea of finding a set of basic principles to which all reasonable members of society can agree and which can be used to evaluate existing institutions. This raises questions regarding how the legitimacy of political orders can be assessed.

The importance of Williams for the realist undertaking, for Hall, is that Williams provides (a starting point for) a genuine realist solution to the problem of legitimacy. Rather than deriving his criteria for political legitimacy from outside politics (such as by applying ethics), Williams finds a standard for evaluating political power in politics itself. For Williams, the principal purpose of politics is to bring about and secure ‘order, protection, safety, trust, and the conditions of cooperation’ (cited in Hall, 160). For Williams, this is the ‘first political question’ because, without a sufficient degree of order, safety and so forth, politics as such is not possible.

From this, Williams claims, follows that not every form of political power is legitimate. The critical question is whether those in power can provide a justification for their regime that convinces a substantial part of the people over whom power is exercised that they are indeed better off under the current rule than they would be in a state of anarchy. Those who exercise power must, in William’s words, plausibly explain ‘what the difference is between the solution and the problem’ (cited in Hall, 140).

Hall sets up the contours of realist thought against the backdrop of ‘mainstream political philosophy’, which in this reading lacks the features attributed to realists, such as the rejection of ideal theory as a helpful model for doing political theory. However, does a mainstream of this sort exist today (and has it ever existed)? Even if we grant the unusual influence that John Rawls has exercised in the field of political theory, it is no longer plausible to identify the mainstream exclusively with this giant figure and those who think along his lines. Thinkers such as Michael Walzer or Amartya Sen are too influential to be excluded from a plausible notion of ‘mainstream’ political theory. Both thinkers, however, show apparent affinities with realist thinking, such as when Sen rejects ideal theory (as he does in The Idea of Justice) or when Walzer emphasises the need for genuine political thinking (see the collection of his essays with the telling title Thinking Politically). At some points (for example, pages 174-75), it would have strengthened Hall’s argument had he identified the non-realist positions in question with concrete thinkers instead of constructing an anonymous mainstream as realism’s ‘other’.

Value, Conflict, and Order addresses some of the essential themes of political realism (such as the untidy nature of political affairs) and some of the challenges it faces (for example, how realists can affirm pluralism without falling into relativism). This makes it required reading for those engaged with realism in political theory and a good starting point for everyone interested in the realist way of thinking about politics. Due to Hall’s careful, critical and fair reconstructions of some of their central ideas, the book will also appeal to those primarily interested in the writings of Berlin, Hampshire or Williams.

Note: This article first appeared at our sister site, LSE Review of Books. It gives the views of the author, not the position of EUROPP – European Politics and Policy or the London School of Economics. Featured image credit: Efe Kurnaz on Unsplash