Members of the European Commission often give media statements about Commission proposals. But what dictates the strategies used by commissioners when engaging with the media? Drawing on a new study, Moritz Müller, Caelesta Braun and Bert Fraussen show that the level of political conflict associated with a proposal has a significant impact on the way commissioners choose to discuss it.

Examples such as the recent Digital Services Act or the Green New Deal show that every time the European Commission formulates a legislative proposal, its reputation is on the line. If a legislative proposal successfully passes the decision-making stage with ample political support, it aids the reputation of the Commission – after all, the organisation will have shown that it can produce sensible and well-founded legislation that obtained political support. It is a different story if the legislative proposal is met with serious political opposition. In these cases, the Commission might seem weaker and less competent, which could limit its (future) influence and authority in policymaking processes.

Previous research has shown that communication is often used as a strategic tool for regulatory organisations to forge a strong reputation for various organisational competencies. Once established, regulators can build on a sound reputation to expand existing mandates, instil trust in key stakeholders, and to ultimately secure their organisation’s survival. We know that regulators often behave strategically when communicating and maintaining their reputational profiles. For instance, they consider potential future developments when making choices or they respond differently to various reputational threats, depending on the nature of the threat.

When examining a commissioner’s public communication efforts during policymaking processes, we focused on two separate decisions. Firstly, would commissioners speak up in the news media or stay silent? Secondly, if they speak up, which communication strategy would they choose? When attempting to predict the commissioners’ strategies regarding these two decisions, we utilised a key principle that has been frequently observed in regulatory communication research: regulators are cautious communicators, who aim to minimise reputational damage and maximise reputational benefits when opportunities to do so emerge.

Put simply, we expected commissioners to voice their opinions in the news if the specific policy context allowed them to ‘look good’ or display their policy competence and stay silent if they ran the risk of ‘looking bad’ or appearing less capable. Equally, we expected commissioners to talk confidently about the Commission’s legislative proposals if they expected broad political support for the Commission’s initiative, while treading much more carefully if they sensed political opposition.

Policy promotion is an instance of a commissioner talking confidently about the Commission’s legislative proposal. In contrast, passive talk is an instance in which a commissioner avoids judgements concerning the legislative proposal and communicates much more carefully and neutrally about the respective proposal, for example by commenting on more procedural aspects such as the involvement of key stakeholders. We then linked every article to policy-specific variables such as political conflict, media salience, and policy complexity. Lastly, we tested our expectations by running multilevel binomial logistic models on the assembled dataset.

Our findings by and large support the image of the cautiously communicating commissioner. We found that most of the included independent variables did not have an influence on whether a commissioner would make a public statement or remain silent – with the exception of policy complexity. The more complex a legislative proposal of the Commission is, the more likely a commissioner is to appear in the news coverage covering the respective proposal.

This finding makes sense from a theoretical perspective, as the Commission is widely seen as a more technocratic actor and therefore might be more inclined to comment on more technical issues with high levels of complexity. When examining the communication strategy of commissioners in the cases when they are featured in the news, we find that political conflict seems to be the driving factor behind their communication strategy. We measured political conflict by assessing the combined voting results in the EU Council and Parliament. An overview of our findings is shown in Figure 1 below.

Figure 1: Relationship between political conflict and the communication strategy of commissioners

If political conflict is low, we find that commissioners communicate much more confidently, highlighting the possible benefits of new policy measures, and thus aiming to capture the reputational benefits of a smooth and successful policymaking process.

One of the least politically conﬂictual cases in the data, Directive 2016/2102 ‘on the accessibility of the websites and mobile applications of public sector bodies’, has been a part of the Commission’s Accessibility Act – a range of policies to better accommodate public infrastructure to the needs to individuals with various types of disabilities. This directive speciﬁcally sets guidelines to improve the accessibility of websites and interfaces of public organisations and has received political support from the beginning to the end of the policymaking process.

The news coverage shows that the responsible commissioner for the legislation, Marianne Thyssen, frequently endorsed the legislation publicly. Most prominently, she wrote an opinion piece on the act in Euractiv in which she promoted the Commission’s efforts to improve accessibility for all and laid out how the Accessibility Act will accomplish this goal. She has made similar promotional statements in other newspaper articles. Other legislative acts in the dataset with little political conﬂict show identical patterns, with policy promotion being the dominant communication style of commissioners in news coverage, complemented with occasional use of passive talk.

Legislative acts that were politically conﬂictual are covered very differently in the news media. If political conflict is high, commissioners are more likely to communicate carefully, and mainly use ‘passive talk’. This strategy allows them to minimise potential reputational damage to the Commission if a policymaking process meets with high levels of resistance.

Consider one of the most conﬂictual legislative acts in the sample, Directive 2016/2284. This aims to regulate certain pollutants in the environment and was met with signiﬁcant political opposition. Alongside disagreements with the Commission’s initial proposal, the Parliament and the Council disagreed on key points in the proposal.

Karmenu Vella, the Commissioner for the Environment, Maritime Affairs and Fisheries at the time, gave frequent but careful statements in the news coverage that mainly described the problems associated with too much air pollution. In contrast to the communication on Directive 2016/2102, he never mentioned the possible beneﬁts of the Commission’s proposal, but instead focused on the problem at hand, or more procedural elements such as how the Commission aimed to facilitate an agreement between the Council and Parliament.

Overall, our findings confirm the image of the cautiously communicating commissioner. If commissioners face reputational risks or damage, they communicate carefully and refrain from making bold claims. However, if they anticipate policy ‘wins’, their language reflects their confidence through public promotion of the Commission’s policy position.

Moritz Müller is a Postdoctoral Researcher at the Institute of Public Administration, Leiden University.

Caelesta Braun is a Professor of Public Governance and Civil Society at the Institute of Public Administration, Leiden University.

Bert Fraussen is an Assistant Professor at the Faculty of Governance and Global Affairs at Leiden University. His research agenda focuses on interest representation and lobbying, as well as how policymakers can ensure the effective and inclusive engagement of societal stakeholders in public governance. 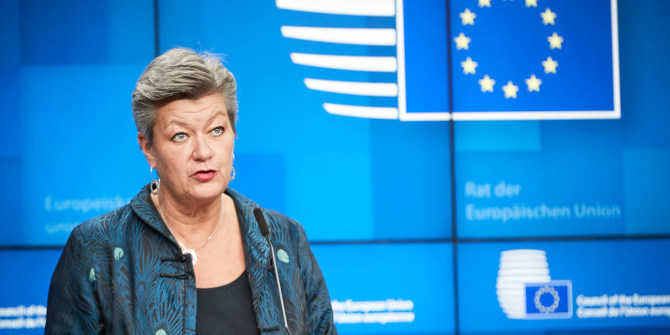 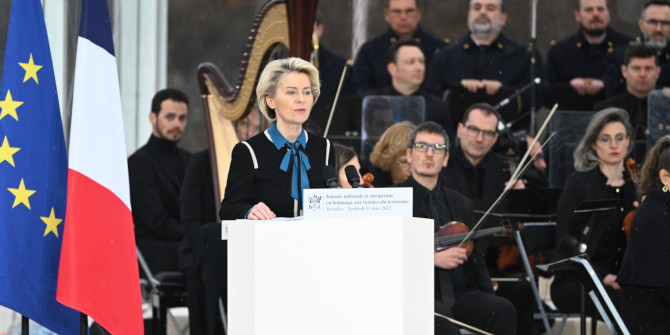