On Sunday, Greece went on a binge-party, drinking to forget the nation’s economic woes and indebtedness. Voters wanted to punish the two main parties that have governed the country for the last four decades, holding them responsible for the austerity measures they’re suffering. So, the party that had won the previous elections – PASOK (centre-left) – saw its vote fall by 31 percentage points to just 13%. The main opposition party – New Democracy (centre-right) – scrambled to first place with just 18.8%, down by 15 percentage points.Not even a combination of ND and PASOK – continuing the recent caretaker government format – could command a majority in Parliament. Not surprisingly, ND leader Antonis Samaras failed to form a coalition against this background. Indeed, it may not be possible for any government to be formed – or not one that can survive – and fresh elections in June look very likely.

Last Sunday’s elections produced shockwaves across the Greek political system, but if this was an electoral ‘revolution’, then it was desperately incomplete. Protest votes went to the far Left SYRIZA, with its populist attacks on Greece’s bailout terms, making it the second largest party in Parliament with 17% of the vote. Public anger also led to other populist successes. The Independent Greeks (Ανεξάρτητοι Έλληνες), is a party led by Panos Kamenos, a former ND MP. He has suggested that the old guard politicians should be hung on street lamp-posts and has urged citizen arrests of them if they try to escape the country. The elections also saw the arrival into Parliament of the Golden Dawn party (Χρυσή  Αυγή/ Chrysi Avgi), a neo-Nazi party led by Nikolaos Michaloliakos. Its platform is anti-immigrant (Greece has become a ‘jungle’) and anti-austerity. At a post-election press conference, journalists that refused to stand for the entrance of ‘the leader’ were hustled out by a militant guard. The party’s 21 MPs have vowed to wear their military berets as a bloc in Parliament.

The political sociology of the electoral upheaval carries warnings to Greece’s leaders. Large proportions of younger voters – half of whom are unemployed – voted for the parties opposing austerity. Chrysi Avghi, for example, appeals to the ranks of the young, uneducated and excluded as Le Front National has taken votes from the poor Paris suburbs.

The elections produced a majority vote for those parties opposing the bailout conditions. But, then, the campaign had placed the advocates of the plan on the back-foot: the public mood obliged all leaders – former Finance Minister Venizelos included – to promise to change the terms. To resist the tide against the continued austerity measures would have been political suicide.

Foreign critics will see the Greek election outcome as the height of irresponsibility by its leaders. Such a view is not without reason: regrettable decisions were made. The decision of Samaras to oppose the first bailout legitimised opposition to the austerity measures. It gave the signal that it was safe and sensible to think of another path for Greece. His later conversion to accept the second bailout seemed more tactical and opportunist than a retraction of his earlier principle. Likewise, Samaras’ insistence on the recent caretaker government of Lucas Papademos being short-lived, removed the opportunity to stabilise the economic situation and forced Greece into a crisis election. PASOK’s former leader, George Papandreou, totally mishandled his initiative last December for Greece to hold a referendum on the second bailout. Yet, this could well have led to a public endorsement and a redrawing of political forces. An opportunity went begging and Merkel and Sarkozy humiliated Papandreou at the G20 summit at Cannes. The Papandreou Government talked reform, but targets were missed and substance undermined. In advance of last Sunday’s elections, the small centrist parties remained separate and failed to enter Parliament (and be potential coalition partners), even though in combination they could have done so.

Paradoxically, while Greece indulged itself in protest on Sunday, the electorate is still firmly behind membership of both the European Union and the euro, according to the polls. Indeed, SYRIZA leader Alexis Tsipras may not be able to keep his party together if it was forced to choose between opposing the bailout Memorandum and continued euro membership. What the elections expressed was a public anger against austerity and this had the unintended effect of drowning-out Greece’s continued European vocation. This happened as mainstream, technocratic voices remained cowed and left the stage to the demagogues.

Populist appeals to ‘the people’ are so far failing to lead them to the answers. If Greece is not granted its next tranche of bailout loans in June, who will pay the salaries of state employees?  After the elections, Greek banks are taking another big hit. There is no winning coalition in Parliament to exit the euro; but then again it isn’t clear that there is a government available to keep it there.

It may be foolhardy for leaders in Athens to assume they have the time to renegotiate the Memorandum and consider other options. Events may overtake them. But if there are fresh elections in June, they will not be so much about punishing past leaders as finding solutions to present problems. Last Sunday’s indulgence cannot last. 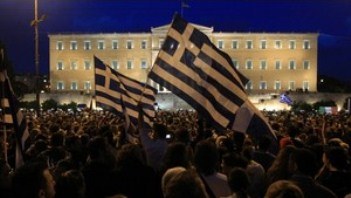 The Crossroad of Reforms for the Greek Public Administration

Bad Behavior has blocked 224 access attempts in the last 7 days.